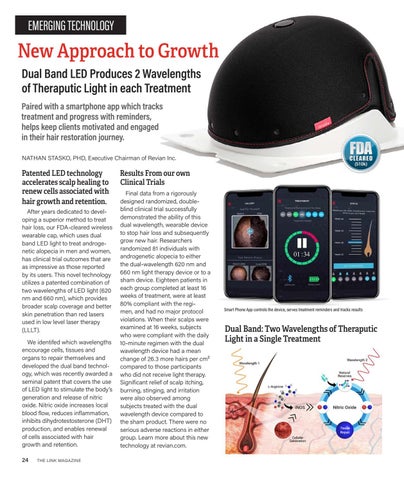 Patented LED technology accelerates scalp healing to renew cells associated with hair growth and retention. After years dedicated to developing a superior method to treat hair loss, our FDA-cleared wireless wearable cap, which uses dual band LED light to treat androgenetic alopecia in men and women, has clinical trial outcomes that are as impressive as those reported by its users. This novel technology utilizes a patented combination of two wavelengths of LED light (620 nm and 660 nm), which provides broader scalp coverage and better skin penetration than red lasers used in low level laser therapy (LLLT). We identifed which wavelengths encourage cells, tissues and organs to repair themselves and developed the dual band technology, which was recently awarded a seminal patent that covers the use of LED light to stimulate the bodyâ&amp;#x20AC;&amp;#x2122;s generation and release of nitric oxide. Nitric oxide increases local blood flow, reduces inflammation, inhibits dihydrotestosterone (DHT) production, and enables renewal of cells associated with hair growth and retention. 24

Results From our own Clinical Trials Final data from a rigorously designed randomized, doubleblind clinical trial successfully demonstrated the ability of this dual wavelength, wearable device to stop hair loss and subsequently grow new hair. Researchers randomized 81 individuals with androgenetic alopecia to either the dual-wavelength 620 nm and 660 nm light therapy device or to a sham device. Eighteen patients in each group completed at least 16 weeks of treatment, were at least 80% compliant with the regimen, and had no major protocol violations. When their scalps were examined at 16 weeks, subjects who were compliant with the daily 10-minute regimen with the dual wavelength device had a mean change of 26.3 more hairs per cmÂ˛ compared to those participants who did not receive light therapy. Significant relief of scalp itching, burning, stinging, and irritation were also observed among subjects treated with the dual wavelength device compared to the sham product. There were no serious adverse reactions in either group. Learn more about this new technology at revian.com.

The Link Magazine is a quarterly trade publication for the Hair Restoration Industry, published by the American Hair Loss Council, www.AHLC.org 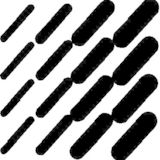