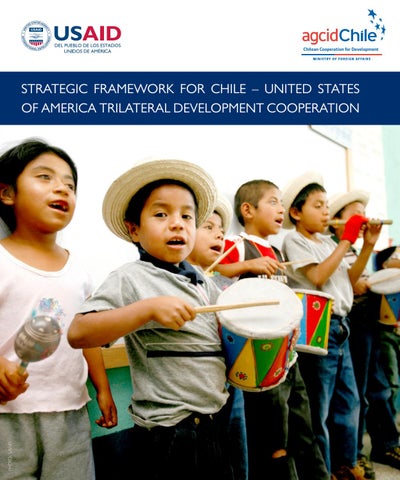 STRATEGIC FRAMEWORK FOR CHILE – UNITED STATES OF AMERICA TRILATERAL DEVELOPMENT COOPERATION I. Context As two of the Region’s leading democracies, Chile and the United States have embarked on a new era of strategic cooperation, as reflected in the following Strategic Framework for Chile-U.S. Trilateral Cooperation. In August 2017, the Chilean President and U.S. Vice-President met and reaffirmed our nations’ partnership and mutual commitment for the sustainable social and economic development of the democratic nations of our Region. The protocols described below reflect Chile’s democratic and economic leadership in the world and its desire to share its considerable domestic and international experience in decreasing poverty and increasing social inclusion, transparency and good governance in the international arena, particularly in the Region. It is in the United States’ interest to further enhance and develop its partnership with Chile considering its regional leadership and engagement in South-South and Trilateral Cooperation, and the success of prior Chile-U.S. trilateral activities. To seize upon these opportunities, Chile and the United States have developed this Strategic Framework of Trilateral Cooperation to advance mutual objectives and further the scope of their joint cooperation. The Chilean International Cooperation Agency for Development (AGCID) was established in 1990 and is responsible for coordinating Chile’s international development cooperation. Chile has a dual role as both recipient and provider of international cooperation. Under its mandate, AGCID manages and administers foreign technical cooperation and engages in South-South and Trilateral Cooperation, whereby sharing Chile’s successful development experiences with countries primarily in Latin America and the Caribbean. Chile&#39;s development cooperation is rooted within the framework of South South Cooperation which emphasizes the importance of development being demand driven, providing mutual benefit, and exchanging experiences and knowledge among peers. The U.S. Agency for International Development (USAID) implements U.S. development cooperation and assistance and was established in 1961.

A. Background: The Memoranda of Understanding (MOUs) signed in 2010 and 2011, built upon the “Memorandum of Understanding on Development Cooperation” signed between the Chilean Foreign Minister and U.S. Secretary of State in April 1998. These MOUs outline our shared intention to establish modes of joint cooperation to foster sustainable development in third countries, in partnership with the host nation government (“trilateral cooperation”). The MOU of 2011 signed between AGCID and USAID outlines broad categories of potential cooperation, including promoting economic growth, improving quality and access to education, enhancing citizen security, addressing social inclusion and reducing extreme poverty.

B. Geographic, Technical Focus: Chile&#39;s policy and strategy for international development cooperation prioritizes Latin America and the Caribbean. For the purposes of this Strategic Framework, Chile and the United States recognize their further prioritization of the “Northern Triangle” of Central America - the countries of El Salvador, Guatemala and Honduras- as focal nations for future trilateral cooperation. The United States and Chile have a mutual interest in strengthening and contributing to the development of the Northern Triangle nations (e.g. as partners under the Alliance for Prosperity Plan). Further, in the Northern Triangle, Chile and the United States can complement one another’s technical expertise and capacity to advance shared development objectives, such as trade facilitation, civil service reform, public financial management, transparency, and judicial reform. While priorities for both AGCID and USAID is working in the Northern Triangle, this Strategic Framework does not exclude trilateral cooperation in the other countries in Latin America and the Caribbean.

II. Presentation This Strategic Framework for AGCID and USAID trilateral cooperation is intended to be a template. It describes, in practical terms and based upon experiences to date, how the agencies intend to work in partnership to achieve common development objectives. It provides ample latitude for AGCID and USAID to draw upon their comparative advantages and their own national development resources and technical expertise while working together, using their own institutional structures and processes, to achieve common development results. To achieve joint goals, both agencies will work in concert and collaborate closely. For the specific purpose of this Strategic Framework, “Trilateral Cooperation” is based on the principle of horizontality and consensus. AGCID and USAID will work in partnership with a Third Country Government to obtain a mutually agreed upon development impact. “Cooperation” can take many forms. Its shape will be driven by the scope of the assistance requested from the Third Country, the development challenge’s relative complexity, the expertise and resources of Chilean institutions that can be facilitated under AGCID’s direction, what USAID expertise and resources are available, and, finally, what the Third Country can contribute in order to address the challenge itself. In sum, “trilateral cooperation” will have no formula beyond the governing principles outlined in this Strategic Framework. The Strategic Framework for AGCID and USAID trilateral cooperation has four phases, some of which occur concurrently, while others are sequential. These include program conception, design, implementation, and evaluation. A brief description of each phase is outlined below. In practice, there will be several variations to this strategic theme, but the overarching principles should remain the same. In addition, AGCID and USAID will strive to make program design and implementation as simple as possible.

A. Program Conception: AGCID and/or USAID will receive or identify a demand from a Third Country government and, in consultation with the U.S. State Department and Chilean Ministry of Foreign Affairs, will analyze if potential support aligns with national strategic priorities and is consistent with the geographic and sectoral priorities of the United States and Chilean governments. Subsequently, both agencies will assess third-country capacity to contribute to and benefit from the program, as well as the nation’s ability to sustain any results beyond the program’s completion date. This analysis has several parts and steps. AGCID will engage government and non-governmental entities that could provide technical assistance, evaluate whether or not the Chilean technical assistance contributes and aligns itself with the national development policies of the beneficiary country, and identify the amount of financial resources needed to cover the expenses related to the Chilean inputs to the concerned project. During this process, AGCID will work in collaboration with their focal point in the Third Country Government, as well as the Chilean Embassy in that particular country, to coordinate the concerned project. USAID/Washington will work with the cognizant USAID Mission management team in the Third Country to discuss the viability of achieving the envisioned development impact and the human and financial resources that might be applied to such an initiative. Once AGCID, USAID, and the Third Country analyses confirm the development impact is attainable, AGCID, joined by a Chilean specialized institution, and USAID may organize a joint exploratory mission to the Third Country to discuss the basic elements of the technical cooperation proposal and obtain buy-in from all parties involved. If successful, program design would commence.

B. Program design: AGCID will coordinate the Government of Chile’s project design, since one or more Chilean entities is likely to have the leading implementation role in the Third Country. USAID/ Washington will engage and coordinate with the USAID/Third Country Mission to factor in USG contributions (e.g., staff expertise, U.S. instruments needed to contribute to the program’s results or other inputs AGCID needs to achieve its intended results). USAID/Washington will inform U.S. Embassy/ Santiago of trilateral actions and plans. AGCID, the Third Country, USAID/Washington and the USAID/ Third Country Mission will work in coordination to draft an Activity Design Document that clearly outlines the development challenges, intended results and impact, indicators, roles and responsibilities, detailed program budget implementation milestones and timeframes, and mid-term and end-of-program evaluation timelines, if applicable.

AGCID, USAID, and the Third Country may sign a Trilateral Cooperation Agreement based upon the key components of the Activity Design Document. The Agreement should be written at a strategic level, but with clear articulation of the development challenge, intended development impact, and a brief overview of the three governments’ roles and responsibilities. The Activity Design Document will be an Annex to the Agreement.

C. Program Implementation: AGCID, USAID, and the Third Country will implement the project according to the approved Activity Design Document. Communication between the three parties is essential. The three parties will ensure that milestones are reached. Coordination mechanisms, such as virtual meetings, joint monitoring missions and technical committee(s), will be determined on a project-by-project basis. Technical coordination will include: • AGCID/USAID Trilateral Executive Committee; • Focal points from AGCID, USAID and the Third Country to guarantee communication among all parties. Cooperation activities may take many forms. Illustrative activities include: workshops, exchanges, publications, technical courses, technical missions, thematic events, regional summits, etc. The two agencies in partnership with the Third Country will assess program performance and solve any issue raised during implementation.

II. Visibility – publicity and branding AGCID and USAID will cooperate to ensure appropriate visibility and public awareness of the cooperation provided and will request that Third Country governments provide publicity acknowledging individual and joint contributions, in equal dimensions for all parties. Both agencies will retain discretion over the use of their own logos, markings or other means of disseminating each Agency’s contribution. Published reports or any other materials for public release of information related to trilateral cooperation activities resulting from the trilateral development partnership between AGCID and USAID will be approved in advance by both agencies. Publications will present, in equal dimensions, the official logos of AGCID and USAID. Any infrastructure or commodities provided to beneficiary countries through trilateral cooperation should be marked, in equal dimensions, with the logos of both agencies and/or symbols representing the nations of Chile and the United States (i.e., flags etc.)

D. Evaluation: Capturing lessons-learned is an important aspect of all cooperation activities and a way to improve future trilateral cooperation program performance. The evaluation mechanism will be jointly determined on a project-by-project basis during the design phase.

III. Knowledge and best practices exchange Staff exchanges have proven to be an excellent way to share best development practices and AGCID and USAID should take advantage of hands-on learning opportunities. Exchanges between AGCID and USAID can (and have) yield significant dividends for both development agencies. The information gained from these exchanges should be shared widely to benefit staff members from both agencies.

IV. Financing/Operation The share of the funding for which AGCID and USAID intend to be responsible will be determined jointly and reflected in the mutually determined budget. Resources can be accounted for through any combination of cash and in-kind contributions (e.g. official salaries and services) for each particular activity or project. The agencies will jointly determine the methods of funding on a project-by-project basis, consistent with each Government’s internal regulations and procedures. Third Country contributions will be sought for all trilateral cooperation activities, whether they be cash or in-kind, in order to ensure appropriate “buy-in” from the host country.

V. Conclusion To maximize the development impact of AGCID-USAID trilateral cooperation in Third Countries, two important principles should be disseminated, internalized, and put into operation in both agencies. First, trilateral cooperation is a priority for Chile and the United States. Second, trilateral cooperation is an organic process that will evolve. No two country programs are likely to be identically shaped or implemented. It is unnecessary to re-invent processes and procedures that have proven successful in achieving the desired development impact. It is important to think creatively about how to approach the development challenge, consider all the tools and resources that USAID, AGCID, and the Third Country can apply to the challenge, and then choose the most efficient and effective path forward to achieve the result. This Strategic Framework for Trilateral Development Cooperation is an opportunity to collectively strengthen the United States and Chile’s development partnership and the impact of our cooperation programs in advancing sustainable development in the region of Latin America and the Caribbean. 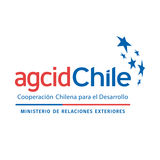