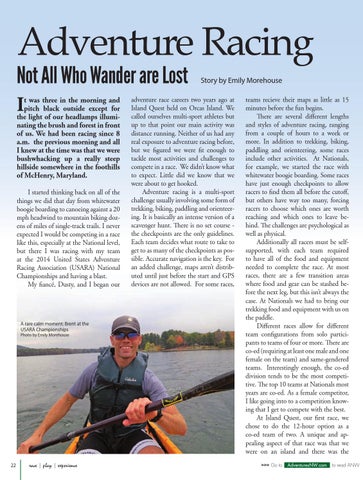 Not All Who Wander are Lost I

t was three in the morning and pitch black outside except for the light of our headlamps illuminating the brush and forest in front of us. We had been racing since 8 a.m. the previous morning and all I knew at the time was that we were bushwhacking up a really steep hillside somewhere in the foothills of McHenry, Maryland. I started thinking back on all of the things we did that day from whitewater boogie boarding to canoeing against a 20 mph headwind to mountain biking dozens of miles of single-track trails. I never expected I would be competing in a race like this, especially at the National level, but there I was racing with my team at the 2014 United States Adventure Racing Association (USARA) National Championships and having a blast. My fiancé, Dusty, and I began our

A rare calm moment: Brent at the USARA Championships Photo by Emily Morehouse

adventure race careers two years ago at Island Quest held on Orcas Island. We called ourselves multi-sport athletes but up to that point our main activity was distance running. Neither of us had any real exposure to adventure racing before, but we figured we were fit enough to tackle most activities and challenges to compete in a race. We didn’t know what to expect. Little did we know that we were about to get hooked. Adventure racing is a multi-sport challenge usually involving some form of trekking, biking, paddling and orienteering. It is basically an intense version of a scavenger hunt. There is no set course the checkpoints are the only guidelines. Each team decides what route to take to get to as many of the checkpoints as possible. Accurate navigation is the key. For an added challenge, maps aren’t distributed until just before the start and GPS devices are not allowed. For some races,

teams recieve their maps as little as 15 minutes before the fun begins. There are several different lengths and styles of adventure racing, ranging from a couple of hours to a week or more. In addition to trekking, biking, paddling and orienteering, some races include other activities. At Nationals, for example, we started the race with whitewater boogie boarding. Some races have just enough checkpoints to allow racers to find them all before the cutoff, but others have way too many, forcing racers to choose which ones are worth reaching and which ones to leave behind. The challenges are psychological as well as physical. Additionally all racers must be selfsupported, with each team required to have all of the food and equipment needed to complete the race. At most races, there are a few transition areas where food and gear can be stashed before the next leg, but this isn’t always the case. At Nationals we had to bring our trekking food and equipment with us on the paddle. Different races allow for different team configurations from solo participants to teams of four or more. There are co-ed (requiring at least one male and one female on the team) and same-gendered teams. Interestingly enough, the co-ed division tends to be the most competitive. The top 10 teams at Nationals most years are co-ed. As a female competitor, I like going into to a competition knowing that I get to compete with the best. At Island Quest, our first race, we chose to do the 12-hour option as a co-ed team of two. A unique and appealing aspect of that race was that we were on an island and there was the &gt;&gt;&gt; Go to

Adventures NW is the region’s favorite outdoor recreation, sports and lifestyle magazine, published since 2006 and focusing on all the area has to offer casual and serious athletes, avid and armchair outdoors people, newcomers and families—anyone who likes to experience the outdoors in some fashion or another. It's a resource for discovering regional outdoor activities and events, and an all-inclusive inspiration to race… play… experience… to try new adventures and delve into all the Pacific Northwest has to offer.