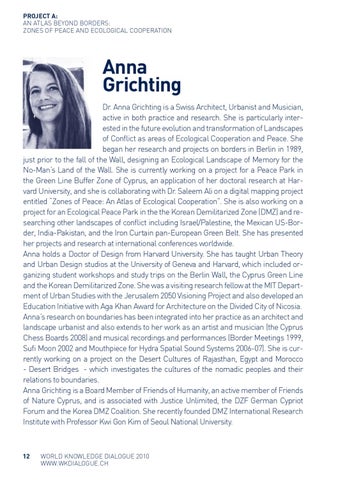 PROJECT A: AN ATLAS BEYOND BORDERS: ZONES OF PEACE AND ECOLOGICAL COOPERATION

Anna Grichting Dr. Anna Grichting is a Swiss Architect, Urbanist and Musician, active in both practice and research. She is particularly interested in the future evolution and transformation of Landscapes of Conflict as areas of Ecological Cooperation and Peace. She began her research and projects on borders in Berlin in 1989, just prior to the fall of the Wall, designing an Ecological Landscape of Memory for the No-Man’s Land of the Wall. She is currently working on a project for a Peace Park in the Green Line Buffer Zone of Cyprus, an application of her doctoral research at Harvard University, and she is collaborating with Dr. Saleem Ali on a digital mapping project entitled “Zones of Peace: An Atlas of Ecological Cooperation”. She is also working on a project for an Ecological Peace Park in the the Korean Demilitarized Zone (DMZ) and researching other landscapes of conflict including Israel/Palestine, the Mexican US-Border, India-Pakistan, and the Iron Curtain pan-European Green Belt. She has presented her projects and research at international conferences worldwide. Anna holds a Doctor of Design from Harvard University. She has taught Urban Theory and Urban Design studios at the University of Geneva and Harvard, which included organizing student workshops and study trips on the Berlin Wall, the Cyprus Green Line and the Korean Demilitarized Zone. She was a visiting research fellow at the MIT Department of Urban Studies with the Jerusalem 2050 Visioning Project and also developed an Education Initiative with Aga Khan Award for Architecture on the Divided City of Nicosia. Anna’s research on boundaries has been integrated into her practice as an architect and landscape urbanist and also extends to her work as an artist and musician (the Cyprus Chess Boards 2008) and musical recordings and performances (Border Meetings 1999, Sufi Moon 2002 and Mouthpiece for Hydra Spatial Sound Systems 2006-07). She is currently working on a project on the Desert Cultures of Rajasthan, Egypt and Morocco - Desert Bridges - which investigates the cultures of the nomadic peoples and their relations to boundaries. Anna Grichting is a Board Member of Friends of Humanity, an active member of Friends of Nature Cyprus, and is associated with Justice Unlimited, the DZF German Cypriot Forum and the Korea DMZ Coalition. She recently founded DMZ International Research Institute with Professor Kwi Gon Kim of Seoul National University.