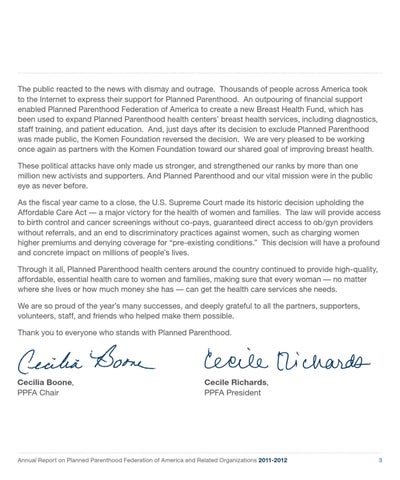 The public reacted to the news with dismay and outrage. Thousands of people across America took to the Internet to express their support for Planned Parenthood. An outpouring of financial support enabled Planned Parenthood Federation of America to create a new Breast Health Fund, which has been used to expand Planned Parenthood health centers’ breast health services, including diagnostics, staff training, and patient education. And, just days after its decision to exclude Planned Parenthood was made public, the Komen Foundation reversed the decision. We are very pleased to be working once again as partners with the Komen Foundation toward our shared goal of improving breast health. These political attacks have only made us stronger, and strengthened our ranks by more than one million new activists and supporters. And Planned Parenthood and our vital mission were in the public eye as never before. As the fiscal year came to a close, the U.S. Supreme Court made its historic decision upholding the Affordable Care Act — a major victory for the health of women and families. The law will provide access to birth control and cancer screenings without co-pays, guaranteed direct access to ob/gyn providers without referrals, and an end to discriminatory practices against women, such as charging women higher premiums and denying coverage for “pre-existing conditions.” This decision will have a profound and concrete impact on millions of people’s lives. Through it all, Planned Parenthood health centers around the country continued to provide high-quality, affordable, essential health care to women and families, making sure that every woman — no matter where she lives or how much money she has — can get the health care services she needs. We are so proud of the year’s many successes, and deeply grateful to all the partners, supporters, volunteers, staff, and friends who helped make them possible. Thank you to everyone who stands with Planned Parenthood.