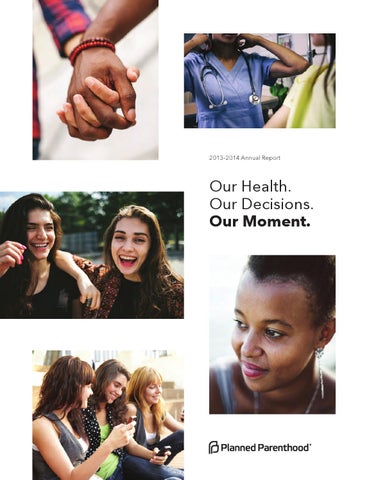 Our Health. Our Decisions. Our Moment.

Our Health. Our Decisions. Our Moment.

Message from Our Chair &amp; President We’ve come a long way since Margaret Sanger was

Our advocacy work is unparalleled; we never stop

and to advance women’s health, with Planned

American women at some point in their lives use birth control — and, thanks to Planned Parenthood and the

Affordable Care Act, more than 48 million women are now eligible to receive it with no copay.

Until 1973, young healthy American women were

dying because of illegal and unsafe abortions. Today, abortion is one of the safest medical procedures in this country.

Thanks to your support, our movement has come so far in nearly one hundred years — and we are building momentum.

Today, we are experiencing an explosion of

engagement among the next generation — as activists,

to the people who need them the most — around the globe, online, and in the most underserved parts of the U.S.

Your generosity helps make all of this work possible. And today, we are stronger than ever, with a record

number of supporters — eight million people. You are not just our supporters; you are our partners. We are

in this movement together, and we depend on you to continue our forward progress.

Thank you for your support and leadership.

patients, and leaders in medical care. They refuse to

feel shamed and stigmatized by sex, birth control, and abortion. They are reframing the language we use,

reproductive rights and justice for all women.

as health care providers, and setting an agenda for

But one thing is constant: people know they can

with approximately 700 health centers across the

country, seeing 2.7 million patients this year. Planned Parenthood continues to be the largest provider of

sex education in the U.S., reaching 1.5 million young people and adults through education and outreach this year.

In 2014, Planned Parenthood expanded our

reach — and deepened our impact — providing

the health care and education that help millions of people pursue their dreams and realize their full potential, and advocating for full access to

that have seen 2.7 million patients this year. PPFA

partners closely with the affiliates to protect women’s health and rights at the national and state levels. Following are highlights from a year full of big moments and important breakthroughs.

01 We helped reduce teen pregnancy to a 20-year low. Planned Parenthood gives young women the tools they need to

through sex education and

teachers, school staff, and other

youth-serving professionals within their communities. The impact of

our work is evident over the long term: Teenage birth, pregnancy, and abortion rates are down to their lowest levels in 20 years.

These declines are the result of

what Planned Parenthood does

better than anyone else — provide sex education and birth control.

the affiliate and national levels on topics ranging from use of long-acting reversible contraception to HPV vaccine completion. We then shared our research through

journal articles and presentations at conferences ranging from the American Public Health Association to the American Congress of Obstetricians and Gynecologists.

We won court victories protecting abortion access. In both Arizona and Iowa, we fought back against medication abortion restrictions

that have no basis in medicine and that would have dramatically reduced access to safe, legal abortion in those states. Thanks to our attorneys’ tough, strategic work,

these laws remain blocked and women in both states are able to access medication abortion while the cases are on appeal.

In Alabama, a federal judge struck down a harmful state law that would have forced three of the five abortion providers in the state to cease their work, thus severely

We’re pushing back against similar laws that closed health centers across Texas and threaten access to abortion in Louisiana, Mississippi, Oklahoma, and Wisconsin.

We reached more than 125,000 young people in moments of crisis through our Chat/Text program.

their phones or through their computers. Over the past year, 126,494 young people used our Chat/Text program, reaching our staff of over 20 dedicated specialists at urgent moments â&amp;#x20AC;&amp;#x201D; for example, following unprotected sex, when they may be worried about pregnancy or STDs and may need emergency contraception.

05 We streamlined and expanded care. We helped 35 affiliates strengthen their operations — leading to a 25 percent increase in productivity. We worked with all of our affiliates to improve

and cervical cancer to increasing access to effective methods of contraception. We launched Online Appointment Scheduling, enabling patients to schedule their appointments anytime, day or

night. In just a few months, 20,000 appointments were scheduled online at 48 health centers, with more affiliates expected to participate in the

expanding access to help patients in underserved communities get the health care they need.

06 We helped increase use of long-acting reversible contraception. Over the last five years, Planned Parenthood health centers have seen a 91 percent increase in the use of IUDs and implants

— the most effective reversible

methods of preventing unintended pregnancies. These are great

including adolescents — who want the best protection and aren’t yet ready to start a family.

Increase in the use of IUDs and implants.

“Different women need different options for birth control. I had to try three different methods until I found one that’s right for me. When I asked my doctor at Planned Parenthood about the IUD, she was enthusiastic and insertion only took a few minutes. Many college-age women are unaware of the IUD, but it’s an excellent option for young people.” Kanisha

outside the U.S. with health care.

Working in partnership with 53 organizations across Africa and Latin America, Planned

reproductive health information and services. In addition, we continued to build the capacity of our partners to engage in effective advocacy efforts, including improved protections for

Through Planned Parenthood Global’s African and Latin American partners, a network of 1,080

We engaged and trained the next generation of leaders. We now have more than 200 college campus groups — a 182 percent increase from

three years ago — at universities ranging from Yale to Wellesley to Spelman. Additionally, 1,503 peer educators (half of whom are people of color) partnered with Planned

Parenthood educators at 42 affiliates and conducted sex education workshops on

issues such as healthy relationships and birth control for youth in their communities — reaching nearly 100,000 young people across the country.

“I first learned about Planned Parenthood from my mom, who would take me with her to the health center. When I was in high school, she told me about the peer education program at my affiliate, and I’ve been involved ever since. My plan is to go to medical school and become an abortion provider. Being part of Planned Parenthood gives me the space to do this work.” Dakota

cancer screenings. Through our partnership with BET Networks, we made it fun and engaging for women

to get the breast care they need. We held the Breast Party Ever in Atlanta, with hundreds of influential young women and celebrities. We ran an online

contest for women around the country to share their own breast health stories, in partnership with the

“When I was 33, I felt two lumps in my breast. The results came back positive: I had breast cancer. During my diagnosis and treatment, I was fearful, anxious, and depressed. One thing that helped me gain a more positive outlook was joining a support group. The other thing was the care and compassion I received from Planned Parenthood.” Natarsha

When the film Obvious Child was released this year, it marked a breakthrough for abortion in popular culture — as an edgy, hip, funny,

remarkably honest story revolving around one

to shape the story, helped them film it in a Planned Parenthood Hudson Peconic health center, and oversaw its release to widespread critical and commercial success.

When NBC rejected an ad for the film because it

included the word “abortion,” Planned Parenthood Action Fund led a national campaign to insist the network reverse course and change its practices. The campaign ignited a social media firestorm — and opened a conversation about abortion

stigma — and NBC decided to run the ad and clarify its policies.

In every medium and across every platform, we informed Americans that the U.S. Supreme Court’s Hobby Lobby decision is dangerous because it gives bosses the

power to decide whether or not women can get access

We turned the Hobby Lobby decision into a national rallying cry.

Dissent” online petition to send a message to lawmakers, employers, and the Supreme Court that our medical decisions belong to us, not our bosses.

in 2013 through the birth control benefit, and that more than 48 million are already eligible for this benefit and

can therefore plan their families, lives, and futures. The result? Nearly three out of four women voters now say this issue is important to them personally.

12 We ran the largest Affordable Care Act canvass for uninsured women in the U.S. More than 1.7 million

about their eligibility for

new health insurance and how to enroll as a result

the first ACA enrollment period. We assisted with over 100,000

Because of our efforts,

many people across the

U.S. got health coverage for the first time.

“After losing my health insurance, I wasn’t making enough money to afford it on my own, so basically I just neglected my health. When I heard about the ACA marketplace, I went to the Planned Parenthood website, typed in my zip code, and found out what my options were. It was easy to enroll online, and I was so excited to have health insurance again. Everyone should have the right to be healthy. I can choose from a range of health care providers, and I choose Planned Parenthood.” Chenoa 2013–2014 ANNUAL REPORT 15

Tests and treatment for sexually transmitted infections provided. 704,079 HIV tests conducted 169,008 STIs diagnosed, enabling people to get treatment and to learn how to prevent the further spread of STIs

Other Procedures, Women and Men

Combined Statement of Revenue, Expenses &amp; Changes in Net Assets: National and Affiliates For The Year Ended June 30, 2014 Operating &amp; Other Funds [All Amounts In Millions]

Summary of financial activities for the year ended June 30, 2014 Our broad base of committed donors provides approximately 81 percent of the national organization’s revenue and 22 percent of affiliate revenue — evidence of our powerful grassroots support.

[b] Payments and receipts between affiliates and the national organization have been eliminated. These include dues and rebates. Related adjustments have been made to the balance sheet.

Planned Parenthood Federation of America, Inc., is a tax-exempt corporation under Internal Revenue Code section 501(c)(3) and is not a private foundation (Tax ID #131644147). Contributions are tax deductible to the fullest extent available under the law. Planned Parenthood affiliates have similar tax status.

[c] The report groups revenue by source (either government or non-government) rather than the manner of disbursement (income versus grants and contracts). Payments from Medicaid managed care plans are listed as “Government Health Services Grants and Reimbursements” to reflect the ultimate source of the funds.

[d] Includes foundation grants, corporate contributions, and support from more than 584,000 active individual contributors, including individual contributions received through workplace giving campaigns (on-the-job solicitation and contributions through payroll deduction plans for employees of federal and state governments and participating corporations). This also includes $50.6 million of bequests. [e] Expenses do not include capitalized expenditures for property, plant, and equipment and repayment of related loans, but do include depreciation and amortization of such property, plant, and equipment and interest expense on such loans.

For The Year Ended June 30, 2014 Operating &amp; Other Funds [All Amounts In Millions]

Excess of Revenue Over Expenses Other Changes In Net Assets