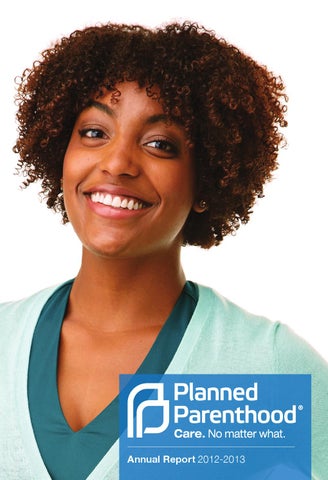 This is Planned Parenthood. We are the nation’s leading reproductive health care provider and advocate, with more than 700 health centers across the country that will see nearly three million patients this year. We are the largest provider of sex education in the U.S., with educators who will reach more than one million young people and adults this year. We are the most effective advocate in the country for policies that protect access to safe and legal abortion and advance women’s health, actively lobbying in every state legislature – and in some states, actually improving reproductive health care access. And we are the leading innovator in bringing reproductive health care and sex education to the places they are needed most – around the globe, online, and in the most underserved parts of the U.S. This is Planned Parenthood’s time. As we approach our 100th anniversary, we are focused on building for the next century. We are investing in unprecedented efforts to help millions more people get high-quality, affordable health care; after leading the fight to ensure that the Affordable Care Act would be a historic advance for women’s health, now we’re making sure its promise is realized in people’s lives. We are investing in technology to reach a whole new generation, both with health care and opportunities for activism. We are investing in the toughest areas of the country where health care is hardest to access and where disparities based on race and class are deepest. And Planned Parenthood Action Fund is using every tool in its toolkit to ensure that we have a political climate that will protect women’s health.

This is Planned Parenthood’s power. We are stronger than ever because we are more diverse than ever. This year, the number of Planned Parenthood chapters on college campuses increased by 50 percent. We now have seven million active supporters – more than 25 percent of our new supporters are under the age of 35, and a fifth are people of color. The new multicultural majority isn’t a group we talk about and talk to. They’re who we listen to. They are changing our country and world for the better. They are our patients, our staff, our donors, and our supporters. They are our future – and, with your help, we are building an organization and a movement that they can call their own. Thank you for your support, your leadership, and your partnership.

Message from Our Chair & President 3

Millions more people begin getting free access to birth control, breast exams, and other preventive care as the Affordable Care Act goes into effect, with the womenâ&#x20AC;&#x2122;s preventive benefit that Planned Parenthood led the fight to include. 4 Annual Report 2012-2013

LEGAL WINS As part of a growing litigation docket with active cases in 12 states last year, courts strike down laws in Arizona and Indiana that would have blocked Medicaid patients from getting care at Planned Parenthood.

NEW HEALTH CENTERS Planned Parenthood opens a new health center in Hattiesburg, Mississippi — one of more than 30 health centers that opened and began serving patients in the last two years.

5. HISTORIC ELECTIONS Women’s health plays a historic and decisive role in the presidential election and in key state elections with the largest gender gap ever recorded.

A new initiative launches in Western Kenya to deliver health care services and information to more women, men, and youth as part of Planned Parenthood Global’s expansion in Africa and Latin America.

WENDY STOOD State Senator Wendy Davisâ&#x20AC;&#x2122; filibuster of a draconian abortion law lights a fire in Texas, as the public rises up against unprecedented attacks on womenâ&#x20AC;&#x2122;s health at the state level, from North Dakota to North Carolina.

ON OFFENSE IN THE STATES California passes a state law allowing non-physicians to provide abortion, while Illinois and Colorado pass laws ensuring sex education in public schools will be comprehensive if it is taught, as Planned Parenthood and allies press forward with a proactive legislative agenda around the country.

POP CULTURE INFLUENCE NBC’s popular series Parenthood depicts the first abortion on a major network entertainment program in years, reaching millions of people with a storyline that connects broader segments of the public about abortion. Planned Parenthood has also worked with major television programs and media outlets such as Girls and Cosmopolitan to promote our brand and cover our issues.

Women whose cancer was detected early or whose abnormalities were identified and addressed because of these screenings. 8 Annual Report 2012-2013

I was just 27 when Planned Parenthood detected my breast cancer. When my mom couldn’t be there, Planned Parenthood’s doctors and nurses held my hand, let me cry, and walked me through every step of my treatment. They helped me find the right breast specialist and also helped me secure financial assistance to cover my diagnostic testing. After a year of chemotherapy, radiation and reconstruction, I am happy, healthy, and strong – my family and I are forever grateful to Planned Parenthood.

COURTNEY My son, Dru, is three, and his little sister, Kinlee, just had her first birthday. They are the biggest blessings of my life â&#x20AC;&#x201C; and theyâ&#x20AC;&#x2122;re here because of Planned Parenthood. All through graduate school, Planned Parenthood provided me with birth control to help control my endometriosis, a condition that otherwise could have left me infertile.

Number of STIs that were diagnosed, enabling people to get treatment and to learn how to prevent the further spread of STIs.

People who participated in in-person education programs, including those who learned how to prevent STIs and how to get testing if they needed it.

REBEKAH I went to Planned Parenthood for contraception and STD testing â&#x20AC;&#x201C; and left with the information and tools to stay healthy and plan my family. As a result, I was able to graduate college, earn my masterâ&#x20AC;&#x2122;s degree from Harvard, and work for the U.S. Congress. Planned Parenthood gave me more than health care services and resources. It gave me a path to accomplish my goals.

****** A service is a discrete clinical interaction, such as the administration of a physical exam or STI test or the provision of a birth control method. In 2012, Planned Parenthood health centers saw approximately three million patients, who collectively received nearly 11 million services during nearly five million clinical visits.

Combined Statement of Revenue, Expenses and Changes in Net Assets: National and Affiliates

SUMMARY OF FINANCIAL ACTIVITIES FOR THE YEAR ENDED JUNE 30, 2013 Our broad base of committed donors provides approximately 82 percent of the national organization’s revenue and 19 percent of affiliate revenue — evidence of our powerful grassroots support.

[b] Payments and receipts between affiliates and the national organization have been eliminated. These include dues and rebates. Related adjustments have been made to the balance sheet.

Planned Parenthood Federation of America, Inc., is a tax-exempt corporation under Internal Revenue Code section 501(c)(3) and is not a private foundation (Tax ID #13-1644147). Contributions are tax deductible to the fullest extent available under the law. Planned Parenthood affiliates have similar tax status.

[c] The report groups revenue by source (either government or nongovernment) rather than the manner of disbursement (income versus grants and contracts). Payments from Medicaid managed care plans are listed as “Government Health Services Grants and Reimbursements” to reflect the ultimate source of the funds.

[d] Includes foundation grants, corporate contributions, and support from more than 669,000 active individual contributors, including individual contributions received through workplace giving campaigns (on-the-job solicitation and contributions through payroll deduction plans for employees of federal and state governments and participating corporations). This also includes $29.4 million of bequests. [e] E xpenses do not include capitalized expenditures for property, plant, and equipment and repayment of related loans, but do include depreciation and amortization of such property, plant, and equipment and interest expense on such loans.

For The Year Ended June 30, 2013 Operating & Other Funds [All Amounts In Millions] EXPENSES

A. Management and General B. Fundraising Total Supporting Services

Other Changes In Net Assets