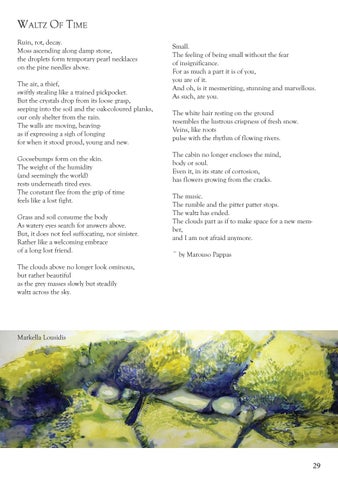 WALTZ OF TIME Ruin, rot, decay. Moss ascending along damp stone, the droplets form temporary pearl necklaces on the pine needles above. The air, a thief, swiftly stealing like a trained pickpocket. But the crystals drop from its loose grasp, seeping into the soil and the oak-coloured planks, our only shelter from the rain. The walls are moving, heavingas if expressing a sigh of longing for when it stood proud, young and new. Goosebumps form on the skin. The weight of the humidity (and seemingly the world) rests underneath tired eyes. The constant flee from the grip of time feels like a lost fight. Grass and soil consume the body As watery eyes search for answers above. But, it does not feel suffocating, nor sinister. Rather like a welcoming embrace of a long lost friend.

Small. The feeling of being small without the fear of insignificance. For as much a part it is of you, you are of it. And oh, is it mesmerizing, stunning and marvellous. As such, are you. The white hair resting on the ground resembles the lustrous crispness of fresh snow. Veins, like roots pulse with the rhythm of flowing rivers. The cabin no longer encloses the mind, body or soul. Even it, in its state of corrosion, has flowers growing from the cracks. The music. The rumble and the pitter patter stops. The waltz has ended. The clouds part as if to make space for a new member, and I am not afraid anymore. ~ by Marouso Pappas

The clouds above no longer look ominous, but rather beautiful as the grey masses slowly but steadily waltz across the sky. 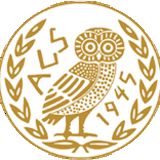