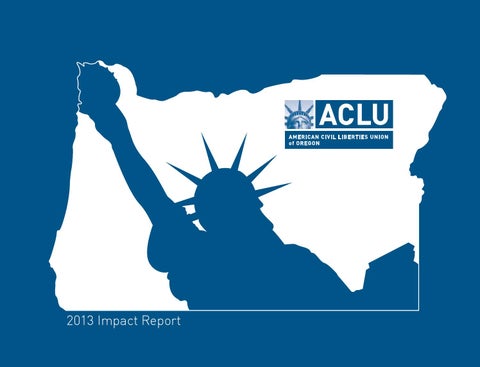 “One of the things I admire and value most about the ACLU is that its commitment to defending individual rights from majoritarian oppression and from abuses of the state is steadfast and unyielding regardless of which political faction is perpetrating those abuses, and regardless of which group is being victimized by them. And it’s that principled commitment that I think makes the ACLU the most important and far and away the most effective civil liberties organization in America.”

Now it’s Oregon’s Turn for Marriage Equality It’s our turn to make history by becoming the first state in the nation to write the freedom to marry into our constitution. Oregon’s constitution currently discriminates against same-sex couples who want to marry. It’s wrong and we will be a key player in the freedom to marry campaign that will ask Oregon voters to amend our state constitution in November 2014 to ensure that all loving and committed couples can marry. We will be building on the amazing successes of ACLU’s nationwide strategy where last year voters in Maine, Maryland, Minnesota and Washington said yes to marriage equality and no to discrimination. Bringing freedom to marry to Oregon is a top priority for the coming year.

THANKS, EDIE! ACLU of Oregon supporters celebrated the Supreme Court’s decision in United States v. Windsor. The ACLU represented 84-year-old widow Edie Windsor who was required to pay $363,000 in estate tax that she would not have paid had she been married to a man. Now married same-sex couples will be treated the same under federal laws and programs as other married couples. ACLU OF OREGON

ACLU’s legal team at the federal courthouse in Portland following a hearing on a case where our clients are seeking the right to find out why they were put on the secret “no-fly list” and for an opportunity to address those reasons. From left: Steven Wilker (ACLU of Oregon Lawyers Committee chair) with ACLU legal staff Hina Shamsi, Kevin Díaz (ACLU of Oregon Legal Director), Nusrat Choudhury and Ahilan Arulanantham.

Under the leadership and guidance of Legal Director Kevin Díaz, 2,325 requests for legal assistance were reviewed and responded to. Last year we had 45 cases in litigation or pre-litigation, representing people across Oregon where key civil liberty issues are at stake. BELOW ARE SOME OF THE ISSUES INVOLVED IN OUR CURRENT DOCKET Challenging government attempts to access private medical prescription records

Seeking full disclosure by police when a peaceful protestor is tasered

Safeguarding the separation of church and state

Defending prisoners’ rights to receive letters from attorneys, family and friends Preserving the right to an attorney when criminal charges are downgraded to violations

ADVOCATING IN THE LEGISLATURE Legislative Director Becky Straus was in Salem full-time during the 2013 legislative session. Her work included carefully scrutinizing 2,679 bills and tracking 777 of them throughout the session because of their civil liberty implications.

Our priority bills passed with the help of 2,262 emails from ACLU supporters who contacted their legislators in response to our email ACTION ALERTS. SAFEGUARDS FROM SPYING

Colleges and employers can no longer require students and employees to hand over passwords to their private social media accounts.

Tuition equity for all Oregon students, regardless of citizenship status, as long as they meet certain eligibility criteria.

Goverment spying on Oregonians with drones will require a search warrant based on probable cause.

Driver license access restored to Oregonians who cannot prove lawful presence in the country, a privilege that was taken away in 2007. Licensing drivers is a matter of public safety â&amp;#x20AC;&amp;#x201C; not citizenship.

EDUCATING THE PUBLIC Our advocacy of civil liberties relies on an educated and well-informed public and is necessary for change. SCHOOL-TO-PRISON PIPELINE PROJECT

Overly harsh disciplinary policies push students down the pipeline and into the juvenile justice system. Our updated report informs educators, policymakers, and other stakeholders about the disproportionate discipline of students of color and how to access the data that documents this disparity. An outgrowth of our work in this area is the formation of the Oregon Alliance for Education Equity, whose vision is the elimination of racial and ethnic disparities in K-12 education. The report is available on our website.

Did you know that the Electronic Communications Privacy Act was passed in 1986 (before the Web was invented!) and has not been adequately updated? In Oregon, and across the nation, the ACLU has exposed ways the government and third parties are collecting, sharing and using data Past topics have included about each of us. Nothing - our phone discrimination against immigrants, digital privacy, First Amendment and calls, emails, medical records, internet searches, travels, online purchases - is our right to protest, death penalty safe from tracking. We are advocating reform, and LGBT rights. for updated laws and search warrant requirements to better protect our information from abuse. Partnering with Lewis &amp; Clark Law School and Oregon Justice Resource Center, we bring ACLU and other experts to Oregon to educate and engage lawyers, students and civil liberties supporters on key issues.

“When I felt powerless in my case against a public institution, when door after door was closing on me, the ACLU became my advocate. By standing up and fighting for my rights, policies were changed - not just here in Oregon, but across the country.” NANCY ROSS

Former client and current Board member

We vigorously stand up for people’s rights whenever &amp; wherever they are violated. That means we are involved in many issues – and some people think that is a weakness. It’s really our strength. Every issue we work on, we get to know very, very well. We apply our skills and experience to each struggle - our knowledge of the courts, our keen understanding of the legislative process, what it takes to influence elected officials (whether in city hall or the legislature), and what it takes to influence public opinion so there is more political support for civil liberties.

Our opponents have invested billions of dollars to undermine civil liberties and prevent advances for civil rights. If we want to achieve the vision of freedom that all of us have for America, the ACLU has to have more resources – there is just no way around it.

Our approach is one of integrated advocacy. Each and every day we are educating the public, lobbying elected officials, engaging volunteers and advocating in the courts. We do this here in Oregon and our sister affiliates do it in every other state. We are a nationwide force with a track record of success.

Together, we create a formidable force that will continue to zealously guard and advance our civil liberties and civil rights.

We are deeply grateful to our cardcarrying Union members and our Foundation donors. Thank you for joining with us in our stand for freedom, equality, and justice.

The ACLU of Oregonâ&amp;#x20AC;&amp;#x2122;s financial engine is driven by the energetic and dedicated work of committed board members, staff and volunteers. We receive no government funding. We depend entirely upon private donations, court-awarded attorney fees and membership dues. This is how your generous support for Fiscal Year 2012-13 was allocated. THANKS AGAIN FOR YOUR SUPPORT!

(based on unaudited financial statements) ACLU OF OREGON

“When I feel despair about the state of our country, the lack of civic education in the schools, the dysfunction of Congress, the evisceration of so much social progress by the Supreme Court, the immense but destructive power of Fox News, when I feel I can&#39;t depend anymore on either political party to stand up for the public good, when I see all the bad things being done and nothing being done about it, I remind myself that at least there is the ACLU. It does not give up trying to stand for all of what is good about this country, and so neither can I -- and I try to support them as best I can.” CAROL (prefers last name to remain anonymous) ACLU Foundation of Oregon Donor DON’T DESPAIR … TAKE TWO ACTIONS AND CALL US IN THE MORNING!

Make a tax-deductible gift to the ACLU Foundation of Oregon.

Become a card-carrying member of the ACLU. There is

power in numbers and in Oregon we are more than 10,000 strong. Membership dues support our lobbying efforts and therefore are not tax-deductible.

Make a tribute gift in someone’s honor or memory

Define your legacy and remember the ACLU in your will or estate plan.

Invite your friends to join the ACLU.

a tax-free gift to the ACLU with a direct rollover from your IRA in 2013.

SAVE THE DATE – SAVE THE NATION!

The ACLU of Oregon is an affiliate of the American Civil Liberties Union, a nationwide, nonpartisan organization defending threats to our constitutionally guaranteed freedoms. Your gift to the ACLU Foundation of Oregon not only ensures funding to protect Oregonians, but a portion of every gift made here is invested in other parts of the country where violations of fundamental rights are rampant, resources are scarce, and the potential for national OF OREGON impact is ACLU significant. Published September 2013