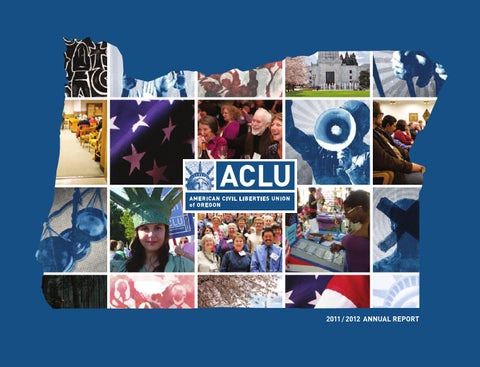 In order to protect civil liberties, it is essential for people to become informed advocates. Our public education program includes:

In the past two years, we have distributed nearly

across Oregon and conducted several Know Your Rights presentations to various groups – from recent immigrants to high school students. “ … [ACLU volunteers] did an amazing job! They were punctual, professional, and energetic. They gave the [Know Your Rights] presentation with ease and fully engaged the students. Most importantly, they answered the students’ questions to the best of their abilities, but did not pretend to provide legal advice… The students seemed empowered from the information they learned from the presenters.” - Myra Cause, Helensview High School

• Engages the next generation of civil libertarians by fostering a strong partnership with Lewis &amp; Clark Law School students. • Brings ACLU and other experts to Oregon to discuss current civil liberties issues. • Educates attorneys, law students and ACLU activists from around the region.

We successfully persuaded the Oregon Department of Education to post discipline data online. We are now working with more than two dozen education advocacy groups to lay the groundwork for creating education equity throughout Oregon.

â&amp;#x20AC;&amp;#x153;Liberty lies in the hearts of men and women; when it dies there, no constitution, no law, no court can save it.â&amp;#x20AC;? - U.S. Supreme Court Justice Learned Hand

The ACLU of Oregon is a full-time advocate for civil liberties at the state capitol. Our legislative program also provides an effective response to city and county legislation statewide. With our “action alerts” and social media networks, we can mobilize nearly 16,000 social media followers and e-activists in grassroots lobbying efforts.

MORATORIUM ON DEATH PENALTY IN OREGON!

Within six days of our action-alert, Governor Kitzhaber heard from nearly

CAPITOL WATCHDOG In Salem, more than

were reviewed (in the short 35-day session!) for civil liberties implications – we examined every one of them and took action where needed.

ACLU aggressively and successfully challenged the ballot titles on two initiative proposals that would have severely limited reproductive freedom in Oregon.

The two anti-choice constitutional amendments failed to qualify for the November 2012 ballot. ACLU of Oregon is a key member of the Pro-Choice Coalition of Oregon which has defeated every anti-choice ballot measure put to Oregon voters in the past 35 years.

Experiences of other cities – such as Portland – show that people of color are arrested and excluded in greater numbers, proportionately, than others.

“So long as we have enough people in this country willing to fight for their rights, we’ll be called a democracy.” - ACLU Founder Roger Baldwin

AND YES, WE LITIGATE! REQUESTS FOR LEGAL ASSISTANCE

We review and respond to every letter, call and email.

“No man is above the law and no man below it.” - Theodore Roosevelt

We helped individuals across the state seek redress for civil liberties violations from a county sheriff, city police departments and governments, transit authorities, state and federal agencies and school boards.

The right to peacefully assemble and protest has been unconstitutionally thwarted in several instances and the ACLU of Oregon is challenging those government actions. We represent several people who, while peacefully protesting President Bush’s visit to Jacksonville, Oregon in 2004, were forcibly moved from the vicinity of the President’s location, yet Bush supporters were allowed to remain. We also represent individuals who were arrested for holding an around-the-clock vigil on the steps of the state capitol building to protest Oregon National Guard’s role in the Iraq war.

RIGHT TO DUE PROCESS The federal government’s No Fly List consists of thousands of people who have been barred altogether from commercial air travel with no meaningful chance to clear their names, resulting in a vast and growing group of individuals whom the government deems too dangerous to fly but too harmless to arrest. It is unconstitutional for the government to put people on secret lists and deny them the right to travel without even basic due process. The ACLU of Oregon, along with the national ACLU, has filed a challenge to this flawed security program in federal court in Oregon.

FREEDOM OF RELIGION AND FREE SPEECH

Government secrecy undermines civil liberties. Transparency in government is necessary for our democracy to flourish. The freedoms of religion and free speech require that no one be forced to take a loyalty oath or to pledge allegiance to the flag. But many schools don’t fully understand the law and force students to stand for the pledge or be punished. As soon as we learn of these situations we put a stop to it – like we did this past year in Reedsport.

This past year, the ACLU of Oregon has tangled with several public agencies while seeking specific records. In two instances, we’ve had to go to court to seek the release of documents. In Jackson County, a court ordered the Sheriff to release to us reports tracking instances of jail deputies using force against inmates. In a second case, still in court, we are seeking records from the City of Eugene related to a notorious incident of a police officer using a Taser on a peaceful protester.

Message from David Fidanque, Executive Director We are deeply grateful to all our donors and members. Your financial support has made Oregon a far better place to live for all people. The threats to civil liberties are real and ongoing, in Oregon and across the country. We have highlighted several in this report, but the breadth and depth of our work cannot adequately be summarized here. I encourage you to visit our website for additional coverage of the issues. Distinguished service award recipients Charles Hinkle and Doris Ennis with David Fidanque Liberty Dinner photos (cover, pg 8, 10) by Andrea Lorimor Lobby Day photos (cover, pg 5) by Kate Horton

Your support ensures that the people of Oregon have an effective, principled defender of civil liberties. There are other organizations who work on some of the civil rights issues we do, but we are the only organization that works on ALL civil rights and civil liberties issues. We are grateful to our hardworking board and many other talented, passionate and

generous volunteers, including scores of attorneys, summer law clerks, and legal intake volunteers. We never charge our clients for legal representation and we never seek government funding - except for the court-awarded attorney fees we occasionally receive. The vast majority of the funding for the Foundation comes from contributions by individuals, including bequests and planned gifts, and, for the ACLU of Oregon, from membership dues. Again, thank you for your support.

Percentage of expenses (based on unaudited financial statements)

“I believe sincerely that the ACLU does more to change the lives of LGBT kids than just about any other organization in this country. I am proud to be here tonight. I am proud to support the ACLU!” – Dan Savage creator of the it gets better project, at THE 2012 liberty dinner

BECAUSE FREEDOM CANâ&amp;#x20AC;&amp;#x2122;T PROTECT ITSELF! The ACLU of Oregon is an affiliate of the American Civil Liberties Union, a nationwide, nonpartisan organization ready to defend threats to our constitutionally guaranteed freedoms. Your gift to the ACLU Foundation of Oregon not only ensures funding to protect Oregonians, but a portion of every gift made here is invested in other parts of the country where violations of fundamental rights are rampant, resources are scarce, and the potential for national impact is significant. What you can do:

Make a tax-deductible gift to the ACLU Foundation of Oregon and support our legal and educational programs.

Become a card-carrying member of the ACLU. There is power in numbers and we are over 10,000 strong and growing! Membership dues support our lobbying efforts.

Remember the ACLU in your will or estate plan. ACT NOW and the ACLU will receive an additional gift THIS YEAR equal to 10% of your future gift. This gift is made possible by a $2 million Legacy Challenge from the LuEsther T. Mertz Charitable Trust. Contact Gail Anderson, Development Director, at ganderson@aclu-or.org or (503) 552-2101.

Join our Action Alert email list to keep informed and know when to act. Visit aclu-or.org to sign up.

Defending the Constitution because…

THE CONSTITUTION IS FOR EVERYONE It’s for liberals and conservatives. It’s for women as well as for men; the right to govern our bodies and our health belongs to us and us alone. It’s for LGBT people as well as straight people.

It’s for immigrants and citizens. Everyone deserves to be treated humanely, whether we were born here or not.

It’s for those of faith and for those who are agnostic or atheist. It’s for one person, one vote, without restrictions and regardless of race or background. It’s for our liberty as well as our privacy and safety.