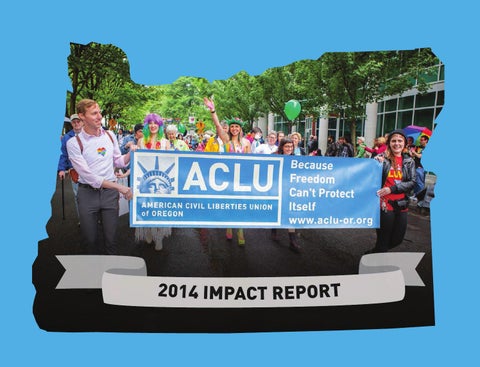 Our clients, Ben &amp; Paul and Lisa &amp; Chris (pictured above) made history on May 19th when Judge McShane struck down Oregon’s constitutional ban on marriage for same-sex couples. Building on the amazing successes of ACLU’s nationwide strategy and OUT FOR FREEDOM campaign, our court victory in Oregon brought us one step closer to the day when the freedom to marry is a reality for all loving couples. From coast to coast, and several places in between, the ACLU is propelling the marriage movement forward.

“I was raised in a culture where marriage was a very important milestone. When you were lucky enough to fall in love with someone, you got married. I have loved Chris for half of my life and I want to marry her. It’s as simple as that.” Lisa Chickadonz, ACLU plaintiff ACLU OF OREGON

How do you know if you’re on the No-Fly list? At Scappoose High School, trying out for the dance team required students and parents to give up their First Amendment free speech right—until the ACLU took action. The school’s policy was so restrictive that it would prevent a parent posting on Facebook, “My daughter’s dance team is awesome!”

After four years of litigation, the federal court for the District of Oregon nally concluded that the lack of any meaningful opportunity to address the reasons why they were placed on the government’s secret No-Fly list violated our clients’ constitutional due process rights. The government must now create a new process that satises the Constitution, including ofcially telling our clients whether they are still on the No-Fly list, providing reasons for their inclusion, and giving them the opportunity to a fair hearing to challenge the government’s decision.

After being repeatedly ignored by the school administration, a parent contacted us for help. The daughter loves to dance and wanted more than anything to be on the dance team but the family rejected a policy that prohibited any communications on or off campus about the school’s dance team by team members or their families. After we led a lawsuit, the school district eventually agreed that the policy was too restrictive.

Buy an airline ticket, y somewhere and then try to return home. This is what happened to many of our clients. They haven’t been told why they are on the list. Getting off the No-Fly list is difcult if not impossible because the government refuses to conrm or deny who is on the list and why.

Ending the Unlawful Detention of Immigrants In a pending state lawsuit, we represent Miguel, a longtime Portland resident who works as a day laborer. In 2011, he spotted a man who had hired him for a job but had never paid him. He approached the man and when he refused to pay again Miguel jumped into the bed of the truck to stop him from taking off. The police arrested Miguel.

The end to this harmful practice of prolonged detention represents a key victory in our ongoing work to disentangle local policing from federal immigration enforcement, a partnership that erodes public safety and community trust in law enforcement.

In Oregon, 31 counties recently announced they will no longer comply with ICE detainer requests. ACLU OF OREGON

Miguelâ&amp;#x20AC;&amp;#x2122;s charges were reduced to violations and promptly resolved, and at that time he should have been released. Instead, the Sheriff detained Miguel for another two days, simply for the convenience of US Immigration and Customs Enforcement (ICE).

Ongoing pressure from the ACLU in the courts and to policymakers, as well as a key ruling in a separate federal lawsuit that counties violated the constitution when they honored ICE holds without probable cause, prompted Sheriffs across Oregon to stop detaining people only because of ICE requests.

Crowd Control or Message Control? We won a lawsuit that allowed this anti-clearcutting advertisement to be placed at the Portland Airport. The Port of Portland initially rejected the ad because it was “political” and the court agreed with us that such censorship violated the free speech rights of the sponsoring conservation organizations.

This was the issue at the heart of the case we led after an anti-Bush protest in Jacksonville in 2004. We believe that the decision by Secret Service agents to order Bush protestors to be moved while allowing Bush supporters to remain in close proximity to the President was taken to censor speech, not for his safety. The government argued that the Secret Service need broad authority when protecting the President and must be immune from liability. Unfortunately, the U.S. Supreme Court ruled unanimously in favor of the Secret Service having qualied immunity even before we could engage in discovery and question the agents about their motivation.

The remainder of the case is now back in U.S. District Court in Medford where we also sued local law enforcement ofcers for using excessive force against the antiBush demonstrators. NPR’s Nina Totenberg interviewing ACLU client Michael Moss outside the US Supreme Court

WHAT’S NEXT… We think it is time for the Oregon Legislature to stand up for Oregonians’ privacy and bring our statutes up to date with our modern digital age.

Has your doctor ever prescribed a controlled substance medication, such as codeine or Ambien, for you? The federal Drug Enforcement Administration (DEA) claims it has the right to access a state database containing your condential prescription records without a warrant. We are representing four patients and a physician who want to keep their medical records private. In court, we argued that access without a warrant violates Oregon law and privacy rights guaranteed by the Fourth Amendment. U.S. District Judge Ancer Haggerty agreed that the DEA needs to get a warrant to access your personal records. The government has appealed.

If you suspect me of wrongdoing – get a warrant. It’s that simple! As technology and surveillance capability advance at whirlwind speeds, laws protecting our privacy have not. The ways we communicate may be new, but constitutional guarantees should still apply. Time and again federal and state ofcials have undermined our right to be free from warrantless searches and seizures because courts are slow to apply the Constitution to new technologies.

Building on our successes from the last legislative session we have been working extensively on an ambitious Privacy Agenda for the 2015 Legislative Session that will move our privacy laws into the 21st century. Sign up for our email action alerts on our website to stay informed.

“Edward Snowden has emboldened the press, he has energized the public and he has started a oncein-a-generation debate that could lead to very signicant changes.” Ben Wizner Director of ACLU Speech, Privacy &amp; Technology Project 7

In March, 300 guests attended our Liberty Dinner and honored the valuable contributions of our volunteer attorneys. These talented and civic-minded attorneys provide our clients with top-notch legal representation free of charge. We are deeply grateful for their service that allows us to represent clients that we would not otherwise have the resources to represent. Because a courageous whistleblower and an emboldened free press have initiated a public debate about surveillance and secrecy, privacy and free expression, and transparency and accountability, we invited Ben Wizner, ACLU attorney and key advisor to Edward Snowden, to be our Keynote Speaker. The ACLU is uniquely positioned to participate in that debate—indeed, to lead it—on all of those fronts, both nationally and in Oregon.

A year ago we said we would bring the freedom to marry to Oregon – and we did! No one predicted all the twists and turns the marriage equality effort would take over the past year and a half. The initial single strategy of a ballot measure morphed into three simultaneous efforts that included a major federal lawsuit and turning back a possible backlash initiative. Throughout it all, we proved, once again, that the ACLU is an essential and effective force for advancing and protecting civil liberties and civil rights in Oregon.

building relationships and coalitions to amplify the ACLU’s reach and effectiveness.

Thank you for your support. Your gifts made a huge impact in Oregon this year! You are a valued partner in these accomplishments and are we are honored by your trust and commitment to this work.

No one else advocates on the breadth of civil liberties issues that we cover every single day. We are a constant presence in Salem during legislative sessions and we work tirelessly throughout the year

*Combined unaudited ď&amp;#x192;&amp;#x17E;nancials are for both the ACLU Foundation of Oregon and the ACLU of Oregon.