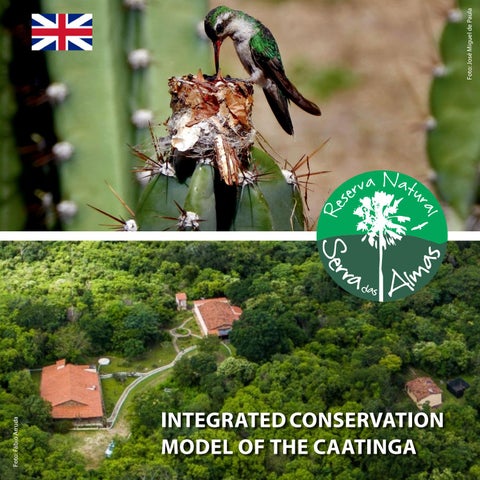 INTEGRATED CONSERVATION MODEL OF THE CAATINGA

Our history began with the creation of the Caatinga Conservation Fund, established by Samuel Johnson (in memoriam) for the protection of the Carnauba palm tree, a symbol of the states of Ceará and Piauí. With this purpose, the Associação Caatinga was founded in 1998 as a non-governmental and non-profit entity. Our first project was to constitute a preserved area that would protect the Carnauba habitat, and this is how the Serra das Almas Natural Reserve (RNSA, as per its acronym in Portuguese) was founded; a Private Natural Heritage Reserve (RPPN, as per its acronym in Portuguese) located between the municipalities of Crateús (CE) and Buriti dos Montes (PI). The RNSA is recognized by UNESCO as Advanced Post of the Caatinga Biosphere Reserve, as it shelters a representative area of preserved Caatinga and has a direct interaction with the rural communities around it. There are 5.845 hectares of protected area with three springs and endangered species; it also contributes to the maintenance of environmental and ecosystem services. Currently, the actions carried out around the RNSA have benefited 40 rural communities.

The institution has been involved in the implementation of socioenvironmental projects that promote the protection of the Caatinga through sustainable local development and water security actions, fostering the creation of new conservation units, stimulation of scientific research, forest restoration of degraded areas, environmental education and communication actions aimed at enhancing the Caatinga biome.

LOCALIZATION The Serra das Almas Natural Reserve is located between the municipalities of Crateús (State of Ceará) and Buriti dos Montes (State of Piauí). The Reserve headquarters is 50km from the city of Crateús and it takes 1h20 by car.

HOW TO GET THERE

STRUCTURE HEADQUARTERS The Headquarters is located in the upper part of the Reserve (Ibiapaba Plateau), where you will find the Center for Environmental Interpretation (CIA, as per its acronym in Portuguese) Prof. Maria Angélica Figueiredo, which has accommodation for up to 40 people and a structure entirely powered by solar energy. This place has a cafeteria, a dormitory, a laboratory, a physical store, a space for hammocks, real-size animal replicas, the “Espaço Caatinga” and four main ecological trails: Arapucas, Macacos, Lajeiro, and Gameleira.

Production of native seedlings at the Samuel Johnson Ecological Center

SAMUEL JOHNSON ECOLOGICAL CENTER This structure is situated in the lower part of the Reserve (Crateús backwoods). It has accommodation for 12 people, a cafeteria, a laboratory, an auditorium with capacity for 30 people, an observation tower, native seedlings nurseries, Melipona bee apiaries, and two ecological trails: Açude and Encosta. It also functions as an Environmental Diffusion Center, a space for the exhibition of sustainable technologies and for courses and lectures on the sustainable use of the Caatinga’s natural resources.

ECOLOGICAL TRAILS ARAPUCAS TRAIL It has 6.5km of extension and although there are no steep climbs or bumpy parts, is considered a moderate trail as it requires a good physical preparation. It crosses the dry forest phytophysiognomy in an advanced stage of regeneration at the highest altitude points of the Reserve (at 740 meters above sea level). At the end of the trail, there are two belvederes with a panoramic view of the Crateús backwoods, one of the conservation unit’s most beautiful views, where you can see the area it covers located in a backwoods depression and some of the surrounding communities. Foto: Fábio Arruda

LAJEIRO TRAIL With 1.5km extension and no steep climbs, this one is considered an easy trail. At the beginning, it crosses the Melancias stream and proceeds towards the Carrasco vegetation. The trail provides a transition between the different Phytophysiognomies of the Caatinga and also allows you to see endemic plant species (Caatinga flora) with their survival adaptations. At the end of the trail, you will find the “Lajeiro”, a rocky outcrop consisting of sandstone rocks and small islands of vegetation where cacti such as Xique-Xique (Pilosocereus polygonus) and Mandacaru (Cereus jamacaru) are found, there are also bromeliads such as Macambira (Bromelia laciniosa).

AÇUDE TRAIL With only 500 meters of extension is located in a backwoods depression. It starts at the Samuel Johnson Ecological Center and continues to the reserve’s only reservoir, where it is possible to observe a great diversity of birds, especially during the rainy season. It presents a different vegetation of dry forest and Carrasco as it contains one of the most beautiful trees of our flora: the Carnauba, which is a symbol of our conservation unit.

MACACOS TRAIL With 2km of extension, it has irregular floor and places where it is necessary to use your hands for balance. The trail runs through a part of the valley of the Melancias stream with a warm climate, providing shade and the possibility of walking at any time of day. It has this name because of the ease of finding capuchin monkeys during the visit. The typical vegetation found is characterized as dry forest. The trees are large and at the end of the trail, there is an old flour house, a historic space. To get to the belvedere, you will need to climb up to the top of a rock; it is considered to have a high level of difficulty.

ENCOSTA TRAIL It is 8km long until it meets the Arapucas trail, totaling 11km. It crosses a lush forest of arboreal Caatinga with typical backwoods species; it also passes through our melipona bee apiary and follows a light walk until climbing the slope of the Ibiapaba Plateau. It is a high difficulty hike, with steep and extensive climbs. During the ascent, you will have an incredible panoramic view and will get to observe different vegetation, soil and climate transitions as you compare the two areas in which the conservation unit is inserted (sierra and backwoods).

GAMELEIRA TRAIL It has an extension of 7.9km and is adapted for cycling. Considered as moderate, you can also enjoy a hike on the trail. It presents dry forest phytophysiognomy in all its extension. It also has an old flour house at the end and a beautiful panoramic view. This trail holds a sensational surprise, down the slopeâ&#x20AC;&#x2122;s rocky trail there is an immense and a leafy gameleira, the largest hundred-year-old tree in the region.

FLORA The Caatinga is a biome that only exists in our country. It has a rich biodiversity with the most varied forms of life, some of which are endemic, this means they are just from this region. In the Serra das Almas Natural Reserve, 323 plant species have been registered so far, distributed in three types of vegetation according to the natural characteristics of the place: Arboreal Caatinga (trees that reach 20 meters in height), Carrasco (thin stemmed bushes and vines) and Dry Forest (tall forest present at the top and slopes of the hills). 1

FAUNA The Reserve also houses a very diverse fauna, including some endemic and endangered species. In the last survey, 45 species of mammals were found, 237 of birds, 45 of reptiles and 33 of amphibians. During the trails you can find some of these species, such as the Caatinga Parakeet (Aratinga cactorum), the Bacurauzinho (Hydropsalis hirundinacea) and the rock cavy (Kerodon rupestris) which are endemic, besides marmosets (Callithrix jacchus), black-striped capuchins (Sapajus libidinosus), and white-naped jays (Cyanocorax cyanopogon), among several other species that can be observed and contemplated. 2

SURROUNDING COMMUNITIES Currently, the actions carried out around RNSA in the implementation of the Integrated Conservation Model cover 40 rural communities and approximately 3,600 families, including 02 indigenous communities and 03 agrarian reform settlements in the municipalities

The Associação Caatinga believes that, in order to be effective in the conservation efforts of the biome, it is necessary to promote the involvement of the backwoods communities, providing conditions that permit their adaptation to the semiarid and fostering sustainable local development, linking nature conservation with income generation. It is for this reason that the Integrated Conservation Model of the Caatinga was created.

ASSOCIAÇÃO CAATINGA The Associação Caatinga is a non-profit civil society organization founded in 1998, qualified as a Civil Society Organization of Public Interest (OSCIP), with the mission of promoting the conservation of Caatinga lands, forests and waters to guarantee permanence of all their forms of life. We develop projects for the conservation of natural areas, forest restoration and recovery of springs, dissemination of sustainable technologies to coexist with the semi-arid region, environmental education, support for conservation research and articulation for the formulation of environmental public policies.

ADOPT THE SERRA DAS ALMAS NATURAL RESERVE CAMPAIGN To improve the work carried out in the Reserve, the Associação Caatinga created the Adopt the Reserve Campaign, where you can make a symbolic adoption of hectares of the Reserve for a period of one year. The funds collected will go directly to the improvement and continuity of the actions developed by the organization. To join the campaign, just access our website and choose one of the modalities. For more information: acaatinga.org.br.

EU PROTEJO O TATU-BOLA CAMPAING The Caatinga’s three-banded armadillo (Tolypeutes tricinctus) is the smallest and least known species of armadillo in Brazil. It lives in the Caatinga and in some Cerrado areas. Being a target of poachers, it is also considered an endangered species. Therefore, all help is very much appreciated as you will contribute to support the conservation of our little armadillo and the forest where it lives. On the other hand, you will be helping to improve water security, as it depends on this preservation. The adoption can be made through the website: www.acaatinga.org.br

MAIN AWARDS AND RECOGNITIONS ODM Brasil Awarded by the Secretariat of the Presidency of the Republic and linked to the United Nations Development Program (UNDP), the Prize is a world pioneering initiative and was created in 2004 with the purpose of encouraging actions, programs and projects that contribute effectively to the fulfillment of the Millennium Development Goals (MDGs), improving the quality of life of the population and fostering social transformations in the country. The No Clima Caatinga project was awarded in the 2014 edition.

Banco do Brasil Foundation Award for Social Technology The Bank of Social Technologies (BTS, as per its acronym in Portuguese) of the Banco do Brasil Foundation is a register of innovative solutions to social problems in several areas. The certification of technologies and experiences are disseminated nationally through this platform. Three social technologies were certified: participatory management of solid waste, integrated model of Caatinga conservation and the eco-efficient stove.

Dryland Champions Granted by the United Nations Convention to Combat Desertification, the award provides recognition for actions that contribute to preventing soil degradation, restoring degraded lands in arid and semi-arid regions around the world. The Associação Caatinga was awarded in 2014.

Joaquim Feitosa Environmental Award The Joaquim Feitosa award is the largest environmental commendation in the state of Ceará and the Associação Caatinga was the winner of the award’s first edition for the outstanding work carried out in support of the Caatinga conservation and sustainable development.

DO YOU WANT TO CONTRIBUTE TO THE ASSOCIAÇÃO CAATINGA? BENEFITS AND OPPORTUNITIES

Investment possibility with a tax incentive for companies taxed based on actual profit.

03 Investment with the social and environmental return As it is a non-profit institution, all investment made in the Associação Caatinga, including those coming from consulting are directed towards the achievement of its institutional and statutory goals, that is, to achieve its mission. The actions carried out have concrete results and national and international recognition.

HOW TO VISIT THE SERRA DAS ALMAS NATURAL RESERVE

The reserve has guides (young local guides) and is open for visits every day of the week, but it is necessary to schedule at least four days in advance. You can schedule your visit directly at the office of the Associação Caatinga in Crateús or by telephone: (88) 3691.8671 or e-mail: caatinga@ acaatinga.org.br or darbilene@acaatinga.org.br 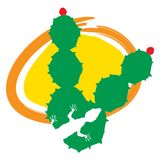 The Serra das Almas Natural Reserve (RNSA, as per its acronym in Portuguese) was founded; a Private Natural Heritage Reserve (RPPN, as per i...

The Serra das Almas Natural Reserve (RNSA, as per its acronym in Portuguese) was founded; a Private Natural Heritage Reserve (RPPN, as per i...