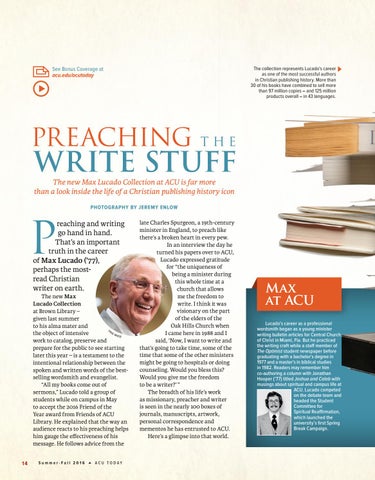 The collection represents Lucado’s career as one of the most successful authors in Christian publishing history. More than 30 of his books have combined to sell more than 97 million copies – and 125 million products overall – in 43 languages.

reaching and writing go hand in hand. That’s an important truth in the career of Max Lucado (’77), perhaps the mostread Christian writer on earth. The new Max Lucado Collection at Brown Library – given last summer to his alma mater and PA UL the object of intensive WH ITE work to catalog, preserve and prepare for the public to see starting later this year – is a testament to the intentional relationship between the spoken and written words of the bestselling wordsmith and evangelist. “All my books come out of sermons,” Lucado told a group of students while on campus in May to accept the 2016 Friend of the Year award from Friends of ACU Library. He explained that the way an audience reacts to his preaching helps him gauge the effectiveness of his message. He follows advice from the

late Charles Spurgeon, a 19th-century minister in England, to preach like there’s a broken heart in every pew. In an interview the day he turned his papers over to ACU, Lucado expressed gratitude for “the uniqueness of being a minister during this whole time at a church that allows me the freedom to write. I think it was visionary on the part of the elders of the Oak Hills Church when I came here in 1988 and I said, ‘Now, I want to write and that’s going to take time, some of the time that some of the other ministers might be going to hospitals or doing counseling. Would you bless this? Would you give me the freedom to be a writer?’ ” The breadth of his life’s work as missionary, preacher and writer is seen in the nearly 100 boxes of journals, manuscripts, artwork, personal correspondence and mementos he has entrusted to ACU. Here’s a glimpse into that world.

Max at ACU Lucado’s career as a professional wordsmith began as a young minister writing bulletin articles for Central Church of Christ in Miami, Fla. But he practiced the writing craft while a staff member of The Optimist student newspaper before graduating with a bachelor’s degree in 1977 and a master’s in biblical studies in 1982. Readers may remember him co-authoring a column with Jonathan Hooper (’77) titled Joshua and Caleb with musings about spiritual and campus life at ACU. Lucado competed on the debate team and headed the Student Committee for Spiritual Reaffirmation, which launched the university’s first Spring Break Campaign. 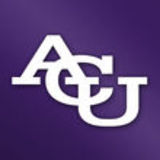