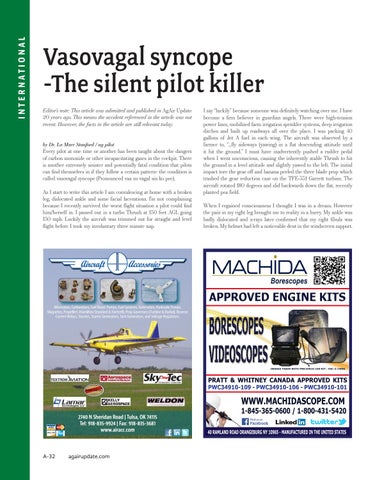 Vasovagal syncope -The silent pilot killer Editor’s note: This article was submitted and published in AgAir Update 20 years ago. This means the accident referenced in the article was not recent. However, the facts in the article are still relevant today.

Every pilot at one time or another has been taught about the dangers of carbon monoxide or other incapacitating gases in the cockpit. There is another extremely sinister and potentially fatal condition that pilots can find themselves in if they follow a certain pattern- the condition is called vasovagal syncope (Pronounced vaa zo vagal sin ko pee). As I start to write this article I am convalescing at home with a broken leg, dislocated ankle and some facial lacerations. I’m not complaining because I recently survived the worst flight situation a pilot could find him/herself in. I passed out in a turbo Thrush at 150 feet AGL going 130 mph. Luckily the aircraft was trimmed out for straight and level flight before I took my involuntary three minute nap.

I say “luckily” because someone was definitely watching over me. I have become a firm believer in guardian angels. There were high-tension power lines, mobilized farm irrigation sprinkler systems, deep irrigation ditches and built up roadways all over the place. I was packing 40 gallons of Jet A fuel in each wing. The aircraft was observed by a farmer to, “...fly sideways (yawing) in a flat descending attitude until it hit the ground.” I must have inadvertently pushed a rudder pedal when I went unconscious, causing the inherently stable Thrush to hit the ground in a level attitude and slightly yawed to the left. The initial impact tore the gear off and banana peeled the three blade prop which trashed the gear reduction case on the TFE-331 Garrett turbine. The aircraft rotated 180 degrees and slid backwards down the flat, recently planted pea field. When I regained consciousness I thought I was in a dream. However the pain in my right leg brought me to reality in a hurry. My ankle was badly dislocated and x-rays later confirmed that my right fibula was broken. My helmet had left a noticeable dent in the windscreen support. 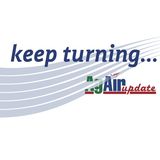