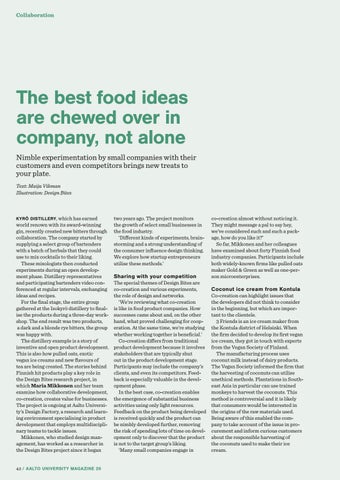 The best food ideas are chewed over in company, not alone Nimble experimentation by small companies with their customers and even competitors brings new treats to your plate. Text: Maija Vikman Illustration: Design Bites

KYRÖ DISTILLERY, which has earned

world renown with its award-winning gin, recently created new bitters through collaboration. The company started by supplying a select group of bartenders with a batch of herbals that they could use to mix cocktails to their liking. These mixologists then conducted experiments during an open development phase. Distillery representatives and participating bartenders video conferenced at regular intervals, exchanging ideas and recipes. For the final stage, the entire group gathered at the Isokyrö distillery to finalise the products during a three-day workshop. The end result was two products, a dark and a blonde rye bitters, the group was happy with. The distillery example is a story of inventive and open product development. This is also how pulled oats, exotic vegan ice creams and new flavours of tea are being created. The stories behind Finnish hit products play a key role in the Design Bites research project, in which Maria Mikkonen and her team examine how collaborative development, co-creation, creates value for businesses. The project is ongoing at Aalto University’s Design Factory, a research and learning environment specialising in product development that employs multidisciplinary teams to tackle issues. Mikkonen, who studied design management, has worked as a researcher in the Design Bites project since it began 42 / AALTO UNIVERSITY MAGAZINE 26

two years ago. The project monitors the growth of select small businesses in the food industry. ‘Different kinds of experiments, brainstorming and a strong understanding of the consumer influence design thinking. We explore how startup entrepreneurs utilise these methods.’

Sharing with your competition

The special themes of Design Bites are co-creation and various experiments, the role of design and networks. ‘We’re reviewing what co-creation is like in food product companies. How successes came about and, on the other hand, what proved challenging for cooperation. At the same time, we’re studying whether working together is beneficial.’ Co-creation differs from traditional product development because it involves stakeholders that are typically shut out in the product development stage. Participants may include the company’s clients, and even its competitors. Feedback is especially valuable in the development phase. In the best case, co-creation enables the emergence of substantial business activities using only light resources. Feedback on the product being developed is received quickly and the product can be nimbly developed further, removing the risk of spending lots of time on development only to discover that the product is not to the target group’s liking. ‘Many small companies engage in

co-creation almost without noticing it. They might message a pal to say hey, we’ve considered such and such a package, how do you like it?’ So far, Mikkonen and her colleagues have examined about forty Finnish food industry companies. Participants include both widely-known firms like pulled oats maker Gold & Green as well as one-person microenterprises.

Co-creation can highlight issues that the developers did not think to consider in the beginning, but which are important to the clientele. 3 Friends is an ice cream maker from the Kontula district of Helsinki. When the firm decided to develop its first vegan ice cream, they got in touch with experts from the Vegan Society of Finland. The manufacturing process uses coconut milk instead of dairy products. The Vegan Society informed the firm that the harvesting of coconuts can utilise unethical methods. Plantations in Southeast Asia in particular can use trained monkeys to harvest the coconuts. This method is controversial and it is likely that consumers would be interested in the origins of the raw materials used. Being aware of this enabled the company to take account of the issue in procurement and inform curious customers about the responsible harvesting of the coconuts used to make their ice cream.

This issue’s theme is trial and error: how you can learn from failure. This is a revised version released on 30 April 2020. Changes have bee...

This issue’s theme is trial and error: how you can learn from failure. This is a revised version released on 30 April 2020. Changes have bee...