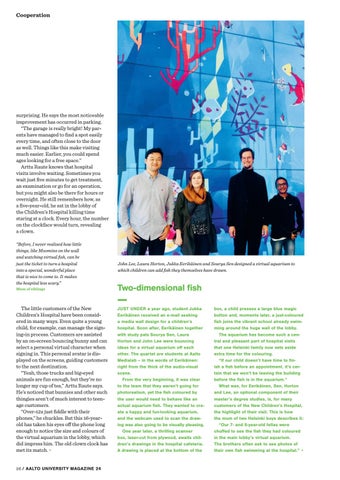 surprising. He says the most noticeable improvement has occurred in parking. “The garage is really bright! My parents have managed to find a spot easily every time, and often close to the door as well. Things like this make visiting much easier. Earlier, you could spend ages looking for a free space.” Arttu Raute knows that hospital visits involve waiting. Sometimes you wait just five minutes to get treatment, an exami­nation or go for an operation, but you might also be there for hours or overnight. He still remembers how, as a five-year-old, he sat in the lobby of the Children’s Hospital killing time staring at a clock. Every hour, the number on the clockface would turn, revealing a clown. “Before, I never realised how little things, like Moomins on the wall and watching virtual fish, can be just the ticket to turn a hospital into a special, wonderful place that is nice to come to. It makes the hospital less scary.”

John Lee, Laura Horton, Jukka Eerikäinen and Sourya Sen designed a virtual aquarium to which children can add fish they themselves have drawn.

The little customers of the New Children’s Hospital have been considered in many ways. Even quite a young child, for example, can manage the signing-in process. Customers are assisted by an on-screen bouncing bunny and can select a personal virtual character when signing in. This personal avatar is displayed on the screens, guiding customers to the next destination. “Yeah, those trucks and big-eyed animals are fun enough, but they’re no longer my cup of tea,” Arttu Raute says. He’s noticed that bunnies and other such thingies aren’t of much interest to teenage customers. “Over-12s just fiddle with their phones,” he chuckles. But this 16-yearold has taken his eyes off the phone long enough to notice the size and colours of the virtual aquarium in the lobby, which did impress him. The old clown clock has met its match. •

JUST UNDER a year ago, student Jukka Eerikäinen received an e-mail seeking a media wall design for a children’s hospital. Soon after, Eerikäinen together with study pals Sourya Sen, Laura Horton and John Lee were bouncing ideas for a virtual aquarium off each other. The quartet are students at Aalto Medialab – in the words of Eerikäinen: right from the thick of the audio-visual scene. From the very beginning, it was clear to the team that they weren’t going for photorealism, yet the fish coloured by the user would need to behave like an actual aquarium fish. They wanted to create a happy and fun-looking aquarium, and the webcam used to scan the drawing was also going to be visually pleasing. One year later, a thrilling scanner box, laser-cut from plywood, awaits children’s drawings in the hospital cafeteria. A drawing is placed at the bottom of the

box, a child presses a large blue magic button and, moments later, a just-coloured fish joins the vibrant school already swimming around the huge wall of the lobby. The aquarium has become such a central and pleasant part of hospital visits that one Helsinki family now sets aside extra time for the colouring. “If our child doesn’t have time to finish a fish before an appointment, it’s certain that we won’t be leaving the building before the fish is in the aquarium.” What was, for Eerikäinen, Sen, Horton and Lee, an optional component of their master’s degree studies, is, for many customers of the New Children’s Hospital, the highlight of their visit. This is how the mum of two Helsinki boys describes it: “Our 7- and 8-year-old fellas were chuffed to see the fish they had coloured in the main lobby’s virtual aquarium. The brothers often ask to see photos of their own fish swimming at the hospital.” •