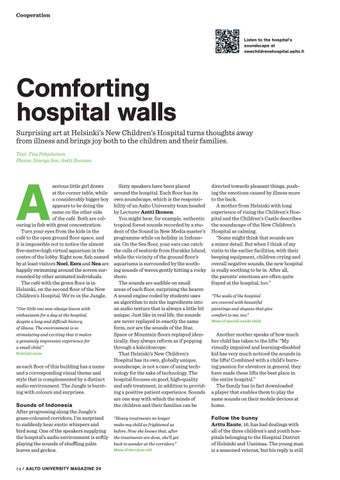 Listen to the hospital’s soundscape at newchildrenshospital.aalto.fi

Surprising art at Helsinki’s New Children’s Hospital turns thoughts away from illness and brings joy both to the children and their families. Text: Tiiu Pohjolainen Photos: Sourya Sen, Antti Ilvessuo

serious little girl draws at the corner table, while a considerably bigger boy appears to be doing the same on the other side of the café. Both are colouring in fish with great concentration. Turn your eyes from the kids in the café to the open ground floor space, and it is impossible not to notice the almost five-metre-high virtual aquarium in the centre of the lobby. Right now, fish named by at least visitors Noel, Esra and Nea are happily swimming around the screen surrounded by other animated individuals. The café with the green floor is in Helsinki, on the second floor of the New Children’s Hospital. We’re in the Jungle, “Our little one now always leaves with enthusiasm for a day at the hospital, despite a long and difficult history of illness. The environment is so stimulating and exciting that it makes a genuinely impressive experience for a small child.” Helsinki mum

as each floor of this building has a name and a corresponding visual theme and style that is complemented by a distinct audio environment. The Jungle is bursting with colours and surprises.

After progressing along the Jungle’s grass-coloured corridors, I’m surprised to suddenly hear exotic whispers and bird song. One of the speakers supplying the hospital’s audio environment is softly playing the sounds of shuffling palm leaves and geckos. 24 / AALTO UNIVERSITY MAGAZINE 24

Sixty speakers have been placed around the hospital. Each floor has its own soundscape, which is the responsibility of an Aalto University team headed by Lecturer Antti Ikonen. You might hear, for example, authentic tropical forest sounds recorded by a student of the Sound in New Media master’s programme while on holiday in Indonesia. On the Sea floor, your ears can catch the calls of seabirds from Harakka Island, while the vicinity of the ground floor’s aquariums is surrounded by the soothing sounds of waves gently hitting a rocky shore. The sounds are audible on small areas of each floor, surprising the hearer. A sound engine coded by students uses an algorithm to mix the ingredients into an audio texture that is always a little bit unique. Just like in real life, the sounds are never replayed in exactly the same form, nor are the sounds of the Star, Space or Mountain floors replayed identically, they always reform as if popping through a kaleidoscope. That Helsinki’s New Children’s Hospital has its own, globally unique, soundscape, is not a case of using technology for the sake of technology. The hospital focuses on good, high-quality and safe treatment, in addition to providing a positive patient experience. Sounds are one way with which the minds of the children and their families can be

directed towards pleasant things, pushing the emotions caused by illness more to the back. A mother from Helsinki with long experience of vising the Children’s Hospital and the Children’s Castle describes the soundscape of the New Children’s Hospital as calming. “Some might think that sounds are a minor detail. But when I think of my visits to the earlier facilities, with their beeping equipment, children crying and overall negative sounds, the new hospital is really soothing to be in. After all, the parents’ emotions are often quite frayed at the hospital, too.”

“Heavy treatments no longer make my child as frightened as before. Now she knows that, after the treatments are done, she’ll get back to wonder at the corridors.”

“The walls of the hospital are covered with beautiful paintings and slogans that give comfort to me, too.” Mum of special-needs child

Another mother speaks of how much her child has taken to the lifts: “My visually impaired and learning-disabled kid has very much noticed the sounds in the lifts! Combined with a child’s burning passion for elevators in general, they have made these lifts the best place in the entire hospital.” The family has in fact downloaded a player that enables them to play the same sounds on their mobile devices at home. Arttu Raute, 16, has had dealings with all of the three children’s and youth hospitals belonging to the Hospital District of Helsinki and Uusimaa. The young man is a seasoned veteran, but his reply is still