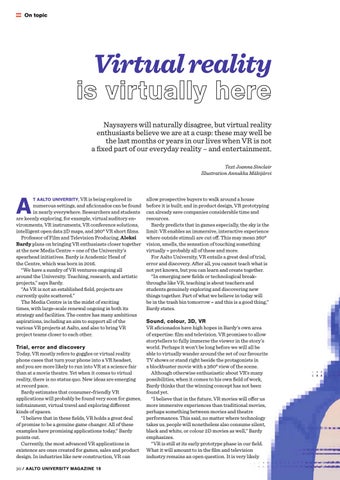 Virtual reality Naysayers will naturally disagree, but virtual reality enthusiasts believe we are at a cusp: these may well be the last months or years in our lives when VR is not a ﬁxed part of our everyday reality – and entertainment. Text Joanna Sinclair Illustration Annukka Mäkijärvi

T AALTO UNIVERSITY, VR is being explored in

numerous settings, and aﬁcionados can be found in nearly everywhere. Researchers and students are keenly exploring, for example, virtual auditory environments, VR instruments, VR conference solutions, intelligent open data 3D maps, and 360° VR short ﬁlms. Professor of Film and Television Producing, Aleksi Bardy plans on bringing VR enthusiasts closer together at the new Media Centre – one of the University’s spearhead initiatives. Bardy is Academic Head of the Centre, which was born in 2016. “We have a sundry of VR ventures ongoing all around the University. Teaching, research, and artistic projects,” says Bardy. “As VR is not an established ﬁeld, projects are currently quite scattered.” The Media Centre is in the midst of exciting times, with large-scale renewal ongoing in both its strategy and facilities. The centre has many ambitious aspirations, including an aim to support all of the various VR projects at Aalto, and also to bring VR project teams closer to each other.

allow prospective buyers to walk around a house before it is built; and in product design, VR prototyping can already save companies considerable time and resources. Bardy predicts that in games especially, the sky is the limit: VR enables an immersive, interactive experience where outside stimuli are cut off. This may mean 360° vision, smells, the sensation of touching something virtually – probably all of these and more. For Aalto University, VR entails a great deal of trial, error and discovery. After all, you cannot teach what is not yet known, but you can learn and create together. “In emerging new ﬁelds or technological breakthroughs like VR, teaching is about teachers and students genuinely exploring and discovering new things together. Part of what we believe in today will be in the trash bin tomorrow – and this is a good thing,” Bardy states.

VR aﬁcionados have high hopes in Bardy’s own area of expertise: ﬁlm and television. VR promises to allow storytellers to fully immerse the viewer in the story’s Trial, error and discovery world. Perhaps it won’t be long before we will all be Today, VR mostly refers to goggles or virtual reality able to virtually wander around the set of our favourite phone cases that turn your phone into a VR headset, TV shows or stand right beside the protagonists in and you are more likely to run into VR at a science fair a blockbuster movie with a 360° view of the scene. than at a movie theatre. Yet when it comes to virtual Although otherwise enthusiastic about VR’s many reality, there is no status quo. New ideas are emerging possibilities, when it comes to his own ﬁeld of work, at record pace. Bardy thinks that the winning concept has not been Bardy estimates that consumer-friendly VR found yet. applications will probably be found very soon for games, “I believe that in the future, VR movies will offer us infotainment, virtual travel and exploring different more immersive experiences than traditional movies, kinds of spaces. perhaps something between movies and theatre “I believe that in these ﬁelds, VR holds a great deal performances. This said, no matter where technology of promise to be a genuine game changer. All of these takes us, people will nonetheless also consume silent, examples have promising applications today,” Bardy black and white, or colour 2D movies as well,” Bardy points out. emphasizes. Currently, the most advanced VR applications in “VR is still at its early prototype phase in our ﬁeld. existence are ones created for games, sales and product What it will amount to in the ﬁlm and television design. In industries like new construction, VR can industry remains an open question. It is very likely 30 / AALTO UNIVERSITY MAGAZINE 18