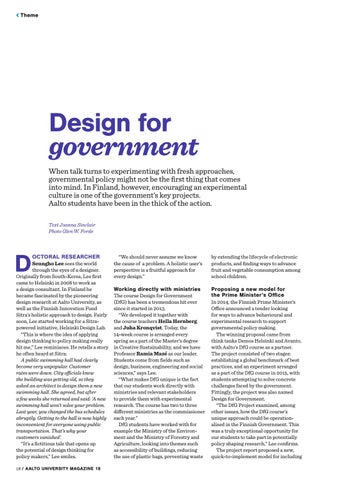 Design for government When talk turns to experimenting with fresh approaches, governmental policy might not be the ﬁrst thing that comes into mind. In Finland, however, encouraging an experimental culture is one of the government’s key projects. Aalto students have been in the thick of the action. Text Joanna Sinclair Photo Glen W. Forde

OCTORAL RESEARCHER Seungho Lee sees the world through the eyes of a designer. Originally from South-Korea, Lee ﬁrst came to Helsinki in 2008 to work as a design consultant. In Finland he became fascinated by the pioneering design research at Aalto University, as well as the Finnish Innovation Fund Sitra’s holistic approach to design. Fairly soon, Lee started working for a Sitrapowered initiative, Helsinki Design Lab. “This is where the idea of applying design thinking to policy making really hit me,” Lee reminisces. He retells a story he often heard at Sitra: A public swimming hall had clearly become very unpopular. Customer rates were down. City officials knew the building was getting old, so they asked an architect to design them a new swimming hall. She agreed, but after a few weeks she returned and said: ‘A new swimming hall won’t solve your problem. Last year, you changed the bus schedules abruptly. Getting to the hall is now highly inconvenient for everyone using public transportation. That’s why your customers vanished’. “It’s a ﬁctitious tale that opens up the potential of design thinking for policy makers,” Lee smiles. 18 / AALTO UNIVERSITY MAGAZINE 18

“We should never assume we know the cause of a problem. A holistic user’s perspective is a fruitful approach for every design.”

by extending the lifecycle of electronic products, and ﬁnding ways to advance fruit and vegetable consumption among school children.

Proposing a new model for the Prime Minister’s Oﬃce

The course Design for Government (DfG) has been a tremendous hit ever since it started in 2013. “We developed it together with the course teachers Hella Hernberg and Juha Kronqvist. Today, the 14-week course is arranged every spring as a part of the Master’s degree in Creative Sustainability, and we have Professor Ramia Mazé as our leader. Students come from ﬁelds such as design, business, engineering and social sciences,” says Lee. “What makes DfG unique is the fact that our students work directly with ministries and relevant stakeholders to provide them with experimental research. The course has two to three different ministries as the commissioner each year.” DfG students have worked with for example the Ministry of the Environment and the Ministry of Forestry and Agriculture, looking into themes such as accessibility of buildings, reducing the use of plastic bags, preventing waste

In 2014, the Finnish Prime Minister’s Office announced a tender looking for ways to advance behavioural and experimental research to support governmental policy making. The winning proposal came from think tanks Demos Helsinki and Avanto, with Aalto’s DfG course as a partner. The project consisted of two stages: establishing a global benchmark of best practices, and an experiment arranged as a part of the DfG course in 2015, with students attempting to solve concrete challenges faced by the government. Fittingly, the project was also named Design for Government. “The DfG Project examined, among other issues, how the DfG course’s unique approach could be operationalised in the Finnish Government. This was a truly exceptional opportunity for our students to take part in potentially policy shaping research,” Lee conﬁrms. The project report proposed a new, quick-to-implement model for including