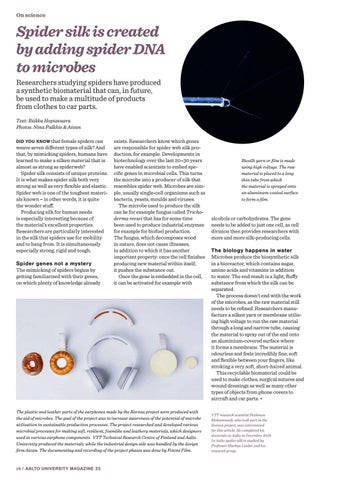 Spider silk is created by adding spider DNA to microbes Researchers studying spiders have produced a synthetic biomaterial that can, in future, be used to make a multitude of products from clothes to car parts. Text: Riikka Hopiavaara Photos: Nina Pulkkis & Aivan DID YOU KNOW that female spiders can

weave seven different types of silk? And that, by mimicking spiders, humans have learned to make a silken material that is almost as strong as spiderweb? Spider silk consists of unique proteins. It is what makes spider silk both very strong as well as very flexible and elastic. Spider web is one of the toughest materials known – in other words, it is quite the wonder stuff. Producing silk for human needs is especially interesting because of the material’s excellent properties. Researchers are particularly interested in the silk that spiders use for mobility and to hang from. It is simultaneously especially strong, rigid and tough.

Spider genes not a mystery

The mimicking of spiders begins by getting familiarised with their genes, on which plenty of knowledge already

exists. Researchers know which genes are responsible for spider web silk production, for example. Developments in biotechnology over the last 20–30 years have enabled scientists to embed specific genes in microbial cells. This turns the microbe into a producer of silk that resembles spider web. Microbes are simple, usually single-cell organisms such as bacteria, yeasts, moulds and viruses. The microbe used to produce the silk can be for example fungus called Trichoderma reesei that has for some time been used to produce industrial enzymes for example for biofuel production. The fungus, which decomposes wood in nature, does not cause illnesses, in addition to which it has another important property: once the cell finishes producing new material within itself, it pushes the substance out. Once the gene is embedded in the cell, it can be activated for example with

The plastic and leather parts of the earphones made by the Korvaa project were produced with the aid of microbes. The goal of the project was to increase awareness of the potential of microbe utilisation in sustainable production processes. The project researched and developed various microbial processes for making soft, resilient, foamlike and leathery materials, which designers used in various earphone components. VTT Technical Research Centre of Finland and Aalto University produced the materials, while the industrial design side was handled by the design firm Aivan. The documenting and recording of the project phases was done by Fotoni Film. 18 / AALTO UNIVERSITY MAGAZINE 25

Biosilk yarn or film is made using high voltage. The raw material is placed to a long thin tube from which the material is sprayed onto an aluminum-coated surface to form a film.

alcohols or carbohydrates. The gene needs to be added to just one cell, as cell division then provides researchers with more and more silk-producing cells.

The biology happens in water

Microbes produce the biosynthetic silk in a bioreactor, which contains sugar, amino acids and vitamins in addition to water. The end result is a light, fluffy substance from which the silk can be separated. The process doesn’t end with the work of the microbes, as the raw material still needs to be refined. Researchers manufacture a silken yarn or membrane utilising high voltage to run the raw material through a long and narrow tube, causing the material to spray out of the end onto an aluminium-covered surface where it forms a membrane. The material is odourless and feels incredibly fine, soft and flexible between your fingers, like stroking a very soft, short-haired animal. This recyclable biomaterial could be used to make clothes, surgical sutures and wound dressings as well as many other types of objects from phone covers to aircraft and car parts. • VTT research scientist Pezhman Mohammadi, who took part in the Korvaa project, was interviewed for this article. He completed his doctorate at Aalto in December 2018. In Aalto spider silk is studied by Professor Markus Linder and his research group.