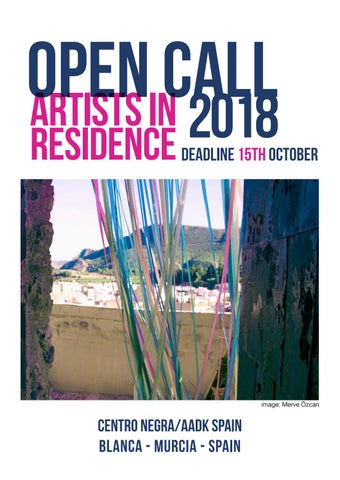 AADK Spain invites artists and researchers from all disciplines who wish to produce works related to AADK’s primary lines of research - Body, Territory and Spatiality - with this call in particular emphasising the idea of ​​“Spatiality”. The abandonment of the historical centre (an area adjacent to the Centre), the aging of the population due to a lack of activities and opportunities for the young, the difficulties in integration of different communities, and the reduced access to contemporary culture within rural areas, are some of the major problems that Blanca faces. We invite applicants to explore these concerns of AADK Spain within the context of Centro Negra and its unique location.

Goals Since AADK Spain’s establishment in Centro Negra, many other cultural initiatives have gradually appeared in Blanca - evidence of a shared desire to recover an abandoned heritage; to create a space that integrates different, and sometimes disparate, communities; to provide increased access to contemporary culture in rural areas; and to create new local economies with a global impact.

Methodology and intention AADK proposes to face these problems as a challenge and to create a working environment within which workshops, seminars, residences, and pilot studies take place; with the intention of injecting ​​ life into the area via cultural actions. It is about facilitating an exchange of knowledge between artists and theorists, incorporating the experience of the local community. We believe that creating an open and inclusive workspace will serve not only to help bring regeneration to the area, but also to form a case study for other initiatives tackling similar themes. It is a challenge that will demonstrate how, through art and thought, it is possible to transform the environment on a physical, social, and above all, a symbolic level.

AADK Spain is an international arts platform that provides spaces for research and contemporary creation. Focused on process and experimentation, its main interest is in exploration of notions of body, spatiality and territory. In 2006, AADK (Aktuelle Architektur Der Kultur), a network of artists residing in Berlin, was founded to develop artistic and curatorial projects. They appropriate and transform disused spaces into institutions dedicated to art. They establish new relationships between curation, creation and reception and generate experiences that shift the margins of artistic practices. As a continuation of this project, in 2012 Abraham Hurtado founded AADK Spain and, together with Juan Conesa -Production Director, he settled in Centro Negra (Blanca, Murcia) to work from the rural - from local to global. In 2015, Elena Azzedin joined the team to directing the current residency program, develop and implement new projects and strengthen existing ones. Through the years they have created and established different programs such as the Residency Program, Interventions, Contemporary Practices, Cartographies, and AADK Radio. AADK Spain works in collaboration with other artistic and cultural spaces, which allows the promotion of mobility, and the exchange of invited artists and their works at a national and international level.

The Residency Program is a space for dialogue and experimentation where ideas are challenged and artists are encouraged to investigate the deeper meanings of their work. It challenges artists to experiment and take risks, to share their doubts and their trials. AADK works at the intersection between art and social sciences, deepening especially in the work with the local community. Connecting its overarching themes to its local context, AADK Spain supports cultural decentralization and increased access to contemporary art in rural areas, considering the town of Blanca and its surroundings as an ideal area in which to intervene. Using an empirical and committed approach, the main interest is to facilitate research and the development of knowledge in a rural area, and to think about its evolution from a social, economic and environmental perspective. We believe in the importance of process and experimentation, away from oppressive time restraints, and in connecting the rural with the urban, the local with the global. By facilitating encounters between visiting artists, the landscape and the local communities, AADK Spain offers a unique opportunity to think together in a time of globalization and crisis. The purpose of the residency program is to improve the artist’s work, as well as to provide experience of coexistence within a temporary community - a creative nucleus built on exchanged knowledge and mutual care. We support artists-in-residence by offering them: curatorial and organizational support; critical discussion, guest visits, seminars and workshops; basic tools, technical equipment and assistance; communication and dissemination; and forging connections with other art institutions at a national and international level. “We believe in art as an experience of life that transforms, at least, those who practice it. Temporary communities created in the residency program with a wide range of nationalities, ages and stages of their professional career enriching not only the artwork but the sense of -being in the world-, opening our understanding and engaging with what we do.“

Centro Negra, the site of AADK Spain, is located in the town of Blanca (Murcia region, south of Spain). Blanca is an unique historical town of 6,000 inhabitants, settled in the Ricote valley, crossed by the Segura river. A picturesque site surrounded by mountains and citrus orchards, Centro Negra is nestled in the cradle of a mountain on the former site of a 12th century Moorish Castle, accessible only by foot. A set of poultry yards built in the beginning of the 20th Century was transformed into the current building, a minimalist space that preserves within its structure the natural walls of the mountain. Impressive views of the Ricote valley available through large windows allow users to have direct contact with the landscape. The studios/exhibition areas are 6 distinct spaces, which are interconnected and could serve multiple purposes.

Artists, architects, landscapers, scientists of all disciplines who want to think and affect these spaces, as well as artists whose interest is to work with themes of the body and territory. We are currently seeking artists and researchers for the period between January and June.

Requirements: To apply for the Residency Program, we require two years of professional experience. Applicants are encouraged to send an email to info@aadk.es, requesting the registration form. Then you can send your proposal including: the registration form, proposal, motivation, and expectations of the residence(maximum 1000 words), a brief biography (Maximum 250 words), and a resume or portfolio in PDF format. The deadline for submission is the 15th of October 2017. The selection process will take place between the 15th and 20th of November 2017. The successful projects will be selected by a committee composed of members of the AADK platform. 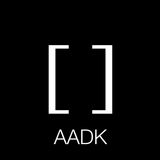