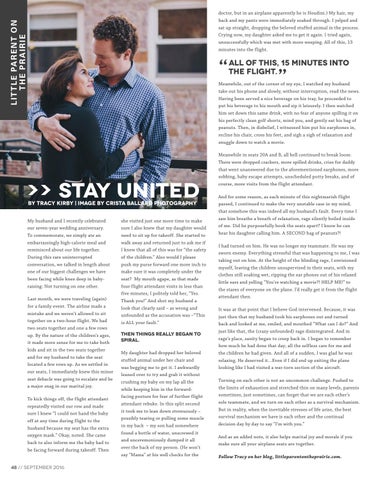 doctor, but in an airplane apparently he is Houdini.) My hair, my back and my pants were immediately soaked through. I yelped and sat up straight, dropping the beloved stuffed animal in the process. Crying now, my daughter asked me to get it again. I tried again, unsuccessfully which was met with more weeping. All of this, 15 minutes into the flight.

ALL OF THIS, 15 MINUTES INTO “THE FLIGHT. Meanwhile, out of the corner of my eye, I watched my husband take out his phone and slowly, without interruption, read the news. Having been served a nice beverage on his tray, he proceeded to put his beverage to his mouth and sip it leisurely. I then watched him set down this same drink, with no fear of anyone spilling it on his perfectly clean golf shorts, mind you, and gently eat his bag of peanuts. Then, in disbelief, I witnessed him put his earphones in, recline his chair, cross his feet, and sigh a sigh of relaxation and snuggle down to watch a movie. Meanwhile in seats 20A and B, all hell continued to break loose. There were dropped crackers, more spilled drinks, cries for daddy

My husband and I recently celebrated our seven-year wedding anniversary. To commemorate, we simply ate an embarrassingly high-calorie meal and reminisced about our life together. During this rare uninterrupted conversation, we talked in length about one of our biggest challenges we have been facing while knee deep in babyraising: Not turning on one other. Last month, we were traveling (again) for a family event. The airline made a mistake and we weren’t allowed to sit together on a two-hour flight. We had two seats together and one a few rows up. By the nature of the children’s ages, it made more sense for me to take both kids and sit in the two seats together and for my husband to take the seat located a few rows up. As we settled in our seats, I immediately knew this minor seat debacle was going to escalate and be a major snag in our marital joy. To kick things off, the flight attendant repeatedly visited our row and made sure I knew “I could not hand the baby off at any time during flight to the husband because my seat has the extra oxygen mask.” Okay, noted. She came back to also inform me the baby had to be facing forward during takeoff. Then 48 // SEPTEMBER 2016

she visited just one more time to make sure I also knew that my daughter would need to sit up for takeoff. She started to walk away and returned just to ask me if I knew that all of this was for “the safety of the children.” Also would I please push my purse forward one more inch to make sure it was completely under the seat? My mouth agape, as that made four flight attendant visits in less than five minutes, I politely told her, “Yes. Thank you!” And shot my husband a look that clearly said – as wrong and unfounded as the accusation was –“This is ALL your fault.” THEN THINGS REALLY BEGAN TO SPIRAL. My daughter had dropped her beloved stuffed animal under her chair and was begging me to get it. I awkwardly leaned over to try and grab it without crushing my baby on my lap all the while keeping him in the forwardfacing posture for fear of further flight attendant rebuke. In this split second it took me to lean down strenuously – possibly tearing or pulling some muscle in my back – my son had somewhere found a bottle of water, unscrewed it and unceremoniously dumped it all over the back of my person. (He won’t say “Mama” at his well checks for the

that went unanswered due to the aforementioned earphones, more sobbing, baby escape attempts, unscheduled potty breaks, and of course, more visits from the flight attendant. And for some reason, as each minute of this nightmarish flight passed, I continued to make the very unstable case in my mind, that somehow this was indeed all my husband’s fault. Every time I saw him breathe a breath of relaxation, rage silently boiled inside of me. Did he purposefully book the seats apart? I know he can hear his daughter calling him. A SECOND bag of peanuts?! I had turned on him. He was no longer my teammate. He was my sworn enemy. Everything stressful that was happening to me, I was taking out on him. At the height of the blinding rage, I envisioned myself, leaving the children unsupervised in their seats, with my clothes still soaking wet, ripping the ear phones out of his relaxed little ears and yelling “You’re watching a movie?! HELP ME!” to the stares of everyone on the plane. I’d really get it from the flight attendant then. It was at that point that I believe God intervened. Because, it was just then that my husband took his earphones out and turned back and looked at me, smiled, and mouthed “What can I do?” And just like that, the (crazy unfounded) rage disintegrated. And in rage’s place, sanity began to creep back in. I began to remember how much he had done that day; all the selfless care for me and the children he had given. And all of a sudden, I was glad he was relaxing. He deserved it…Even if I did end up exiting the plane looking like I had visited a war-torn section of the aircraft. Turning on each other is not an uncommon challenge. Pushed to the limits of exhaustion and stretched thin on many levels, parents sometimes, just sometimes, can forget that we are each other’s sole teammate, and we turn on each other as a survival mechanism. But in reality, when the inevitable stresses of life arise, the best survival mechanism we have is each other and the continual decision day by day to say “I’m with you.” And as an added note, it also helps marital joy and morale if you make sure all your airplane seats are together. Follow Tracy on her blog, littleparentontheprairie.com.