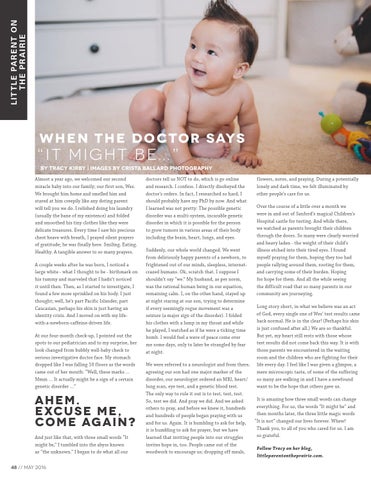 BY TRACY KIRBY | IMAGES BY CRISTA BALLARD PHOTOGRAPHY Almost a year ago, we welcomed our second miracle baby into our family; our first son, Wes. We brought him home and smelled him and stared at him creepily like any doting parent will tell you we do. I relished doing his laundry (usually the bane of my existence) and folded and smoothed his tiny clothes like they were delicate treasures. Every time I saw his precious chest heave with breath, I prayed silent prayers of gratitude; he was finally here. Smiling. Eating. Healthy. A tangible answer to so many prayers. A couple weeks after he was born, I noticed a large white - what I thought to be - birthmark on his tummy and marveled that I hadn’t noticed it until then. Then, as I started to investigate, I found a few more sprinkled on his body. I just thought; well, he’s part Pacific Islander, part Caucasian, perhaps his skin is just having an identity crisis. And I moved on with my lifewith-a-newborn-caffeine-driven life. At our four-month check-up, I pointed out the spots to our pediatrician and to my surprise, her look changed from bubbly well-baby check to serious investigative doctor face. My stomach dropped like I was falling 10 floors as the words came out of her mouth: “Well, these marks … Mmm … It actually might be a sign of a certain genetic disorder …”

doctors tell us NOT to do, which is go online and research. I confess. I directly disobeyed the doctor’s orders. In fact, I researched so hard, I should probably have my PhD by now. And what I learned was not pretty: The possible genetic disorder was a multi-system, incurable genetic disorder in which it is possible for the person to grow tumors in various areas of their body including the brain, heart, lungs, and eyes. Suddenly, our whole world changed. We went from deliriously happy parents of a newborn, to frightened out of our minds, sleepless, internetcrazed humans. Ok, scratch that. I suppose I shouldn’t say “we.” My husband, as per norm, was the rational human being in our equation, remaining calm. I, on the other hand, stayed up at night staring at our son, trying to determine if every seemingly rogue movement was a seizure (a major sign of the disorder). I folded his clothes with a lump in my throat and while he played, I watched as if he were a ticking time bomb. I would feel a wave of peace come over me some days, only to later be strangled by fear at night. We were referred to a neurologist and from there, agreeing our son had one major marker of the disorder, our neurologist ordered an MRI, heart/ lung scan, eye test, and a genetic blood test. The only way to rule it out is to test, test, test. So, test we did. And pray we did. And we asked others to pray, and before we knew it, hundreds and hundreds of people began praying with us and for us. Again. It is humbling to ask for help, it is humbling to ask for prayer, but we have learned that inviting people into our struggles invites hope in, too. People came out of the woodwork to encourage us; dropping off meals,

flowers, notes, and praying. During a potentially lonely and dark time, we felt illuminated by other people’s care for us. Over the course of a little over a month we were in and out of Sanford’s magical Children’s Hospital castle for testing. And while there, we watched as parents brought their children through the doors. So many were clearly worried and heavy laden - the weight of their child’s illness etched into their tired eyes. I found myself praying for them, hoping they too had people rallying around them, rooting for them, and carrying some of their burden. Hoping for hope for them. And all the while seeing the difficult road that so many parents in our community are journeying. Long story short, in what we believe was an act of God, every single one of Wes’ test results came back normal. He is in the clear! (Perhaps his skin is just confused after all.) We are so thankful. But yet, my heart still rests with those whose test results did not come back this way. It is with those parents we encountered in the waiting room and the children who are fighting for their life every day. I feel like I was given a glimpse, a mere microscopic taste, of some of the suffering so many are walking in and I have a newfound want to be the hope that others gave us. It is amazing how three small words can change everything. For us, the words “It might be” and then months later, the three little magic words “It is not” changed our lives forever. Whew! Thank you, to all of you who cared for us. I am so grateful. Follow Tracy on her blog, littleparentontheprairie.com. 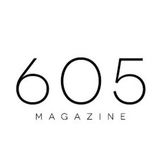