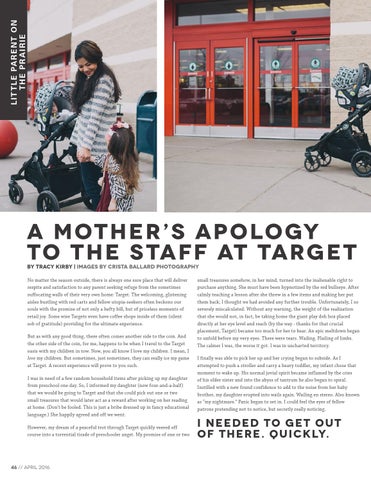 A MOTHER’S APOLOGY TO THE S TAFF AT TARG ET BY TRACY KIRBY | IMAGES BY CRISTA BALLARD PHOTOGRAPHY No matter the season outside, there is always one sure place that will deliver respite and satisfaction to any parent seeking refuge from the sometimes suffocating walls of their very own home: Target. The welcoming, glistening aisles bustling with red carts and fellow utopia-seekers often beckons our souls with the promise of not only a hefty bill, but of priceless moments of retail joy. Some wise Targets even have coffee shops inside of them (silent sob of gratitude) providing for the ultimate experience. But as with any good thing, there often comes another side to the coin. And the other side of the coin, for me, happens to be when I travel to the Target oasis with my children in tow. Now, you all know I love my children. I mean, I love my children. But sometimes, just sometimes, they can really ice my game at Target. A recent experience will prove to you such. I was in need of a few random household items after picking up my daughter from preschool one day. So, I informed my daughter (now four-and-a-half) that we would be going to Target and that she could pick out one or two small treasures that would later act as a reward after working on her reading at home. (Don’t be fooled. This is just a bribe dressed up in fancy educational language.) She happily agreed and off we went. However, my dream of a peaceful trot through Target quickly veered off course into a torrential tirade of preschooler angst. My promise of one or two

small treasures somehow, in her mind, turned into the inalienable right to purchase anything. She must have been hypnotized by the red bullseye. After calmly teaching a lesson after she threw in a few items and making her put them back; I thought we had avoided any further trouble. Unfortunately, I so severely miscalculated. Without any warning, the weight of the realization that she would not, in fact, be taking home the giant play doh box placed directly at her eye level and reach (by the way - thanks for that crucial placement, Target) became too much for her to bear. An epic meltdown began to unfold before my very eyes. There were tears. Wailing. Flailing of limbs. The calmer I was, the worse it got. I was in uncharted territory. I finally was able to pick her up and her crying began to subside. As I attempted to push a stroller and carry a heavy toddler, my infant chose that moment to wake up. His normal jovial spirit became inflamed by the cries of his older sister and into the abyss of tantrum he also began to spiral. Instilled with a new found confidence to add to the noise from her baby brother, my daughter erupted into wails again. Wailing en stereo. Also known as “my nightmare.” Panic began to set in. I could feel the eyes of fellow patrons pretending not to notice, but secretly really noticing.