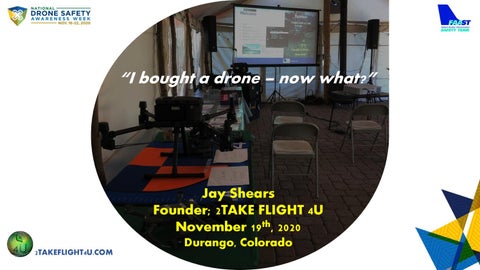 • Introductions • I bought a drone, now what? • Type of Flying, Pilot and Drones • Airspace and Regulations • Other Considerations • Q&A • Drawing for two door prizes 2TAKEFLIGHT4U.COM

Every flight is subject to some set of airspace rules Know what the rules are and which rules you are flying under!

rec flyers) and 350 (sUA used for educational purposes) of the FAA Reauthorization Act of 2018 (good for 5 years).

need to throw out what you knew about • You drone laws in the USA and start over again!

1981 AC91-57 was published regarding “model aircraft” 2007 – Published policy statement that 91-57 applies only to modelers. Commercial Ops are prohibited

2014 – FAA published the interpretation of Section 336 i.e. “the aircraft would need to be operated purely for recreational or hobby purposes”

Are there exceptions? All sUA must fly under Part 107 except: • Recreation – Fly for FUN • (Limited exception to Part 107 Rules called “Section 44809” which provides conditions that must be satisfied to use this exception for sUA that are flown for recreation and under 55 lbs.)* *”Operators of small unmanned aircraft (also referred to as sUA) for recreational purposes must follow the rules in 14 CFR part 107 for FAA certification and operating authority unless they follow the conditions of the Exception for Limited Recreational Operations of Unmanned Aircraft” (Docket No. FAA-2019-0364)

What Rules? TYPE OF FLIGHT

“Fly for Fun” Changes are coming – Drone Operators may be required to pass an aeronautical knowledge and safety test and carry proof of test passage (Section 44809 of the FAA Reauthorization Act of 2018) – The FAA may issue guidance for how it will recognize community based organizations (i.e. AMA, etc.)

*Recreational flyers should know that if they intentionally violate any of the safety requirements, and/or operate in a careless or reckless manner, they could be liable for criminal and/or civil penalties

The Recreational Pilot must pass a test and keep proof of passing the test to show to FAA or law enforcement. The test will cover the Limited Recreational drone laws. FAA is currently working on creating a test ATC will no longer accept requests to operate recreational drones in controlled airspace* the FAA is granting temporary airspace authorizations to fly in certain approved “fixed sites” in controlled airspace. Recreational aircraft have to be registered and marked to receive this authorization You have to show registration to FAA or Law Enforcement if asked Limited Recreational Pilots can now fly in Class G airspace without an airspace authorization You must complies with all airspace restrictions and prohibitions

*UPDATE - The Low Altitude Authorization and Notification Capability (LAANC) is now available to limited recreational flyers in most LAANC capable airports. The LAANC must be used to obtain daylight airspace authorization when available, unless you are flying in a fixed FAA approved flying site Recreational flyers can now fly

Flying for any type of Compensation or Hire Must be at least 16 years old Able to read, speak, and understand English Be in a physical and mental condition to safely fly a sUAS Obtain a FAA Tracking Number (FTN) through the Integrated Airman Certification and Rating Application (IACRA) Register and pass a knowledge test; complete form 8710-13 (RPIC) Operation in Class G airspace permitted without consent Operation in Class B, C, D, and E airspace (controlled) are allowed with ATC controlling authority permission Eligible for Part 107 Waivers; Examples: – – – – – –

• Control Station – Interface used by the remote pilot to control the path of the aircraft • Corrective Lenses – Spectacles or contact lenses • Small Unmanned Aircraft (sUA) – Unmanned aircraft that weigh less than 55 lbs on takeoff, including everything that is on-board or otherwise attached to the aircraft and is operated without the possibility of direct Human intervention from within or on the aircraft • Small Unmanned Aircraft System (sUAS) – Small Aircraft and its associated elements that are required for the safe and efficient operation of the small unmanned aircraft in the National Airspace System (NAS) Photography by Jay Shears

• Visual Observer (VO) – A person who is designated by the RPIC and the person manipulating the flight controls of the sUAS to see and avoid other air traffic or objects aloft or on the ground.

• Person Manipulating the Controls (PMC) – A person other than the Remote Pilot in Command who is controlling the flight of an sUAS under the supervision of the RPIC. • Remote Pilot in Command (RPIC) – A person who holds a remote pilot certificate with an sUAS rating and has the final authority and responsibility for the operation and safety of the sUAS operation conducted under Part 107. 2TAKEFLIGHT4U.COM Photography by Jay Shears

Before you fly • Prior to the flight; the RPIC must: • Assess the operating environment, considering the risks to person and property in the immediate vicinity both on the surface and in the air. Includes: • Weather • Airspace and flight restrictions • Location of persons and property on the surface • Other ground hazards • Ensure that all persons directly participating in the sUA flight are informed about conditions, emergency procedures, contingency procedures, roles and responsibilities and potential hazards • Ensure that all control links between ground control station and the sUA are working correctly. • Ensure that there is enough power available for the sUA to operate for the intended operational time • Ensure that any object attached or carried by the sUA is secure and will not adversely affect the flight characteristics or controllability of the aircraft 2TAKEFLIGHT4U.COM

• All sUA’s under Part 107 must be registered regardless of weight.

• Under the exception for recreational flyers; your sUA (weighing more than .55 lbs. and no more than 55 lbs.) that is flying under the rules for Limited Recreational Operation must also be registered. • Otherwise you must be registered, as provided for in 14 CFR Part 47 or Part 48 prior to operating under Part 107. Part 48 is the regulation that establishes the streamlined online registration. • www.FAAdronezone.faa.gov • You must be at least 13 years old to register and this is only within the territorial limits of the United States

• 400 Feet permissible radius around a structure

Report accident to the FAA within 10 days IF: • There is a serious injury to any person or loss of consciousness • A serious injury is when a person requires hospitalization

• Damage to property other than the sUA, if the cost is greater than $500 to repair or replace the property, including cost of labor • Can be done by phone, written or online at: • http//www.faa.gov/uas/

FAA “Ramp Check” • Remote Pilot Certificate • Any other document, record or report required to be kept under the regulations that you are operating under • Must upon request, allow the administrator to make any test or inspection of the sUAS, the RPIC, the person manipulating the controls of the sUA and the VO to determine compliance. Photography by Jay Shears

â&#x20AC;˘ Before each flight the RPIC must inspect the sUAS to ensure that it is in the condition for safe operation; such as inspecting the equipment for equipment damage or malfunction. â&#x20AC;˘ Even if the sUA manufacturer has a written preflight inspection procedure, it is recommended that the RPIC ensure that the following inspections items are incorporated into the preflight inspection procedure required by Part 107 to help the RPIC determine that the sUAS is in a condition for safe operation.

• Medical Condition can interfere with the safe operation of the sUAS • Being able to safely operate sUAS relies on, among other things, the physical and mental capacities of the RPIC, person manipulating the controls, VO and any other person participating in the mission and/or the flight.

• Though any of the participants in the mission and/or flight are not required to obtain a medical certificate; they may not participate in the operation if they know of any condition where they are physically unfit

â&#x20AC;˘ Just like manned aircraft the RPIC of a sUAS is directly responsible for, and is the final authority as to the operation of the sUAS

Inflight Emergency • An in-flight emergency is an unexpected and unforeseen serious occurrence or situation that requires urgent, prompt attention

• An RPIC who exercises this emergency power to deviate from the rules of Part 107 is required, upon FAA request, to send a written report to the FAA explaining the deviation. Emergency action should be taken in such a way as to minimize injury or damage to the property

• No person may operate a sUAS in a careless or reckless manner as to endanger the life or property of another or allow an object to be dropped from an sUA in a manner that creates an undue hazard to persons or property. • Note: you may never carry objects on the aircraft for compensation or hire. Part 107 does not allow the carriage of hazardous materials because the carriage of hazardous materials poses a higher level of risk • No person may operate a sUAS from a moving aircraft or from a moving land or water borne vehicle unless the sUA is flown over a sparsely populated area and is not transporting another persons property for compensation or hire.

• Part 107 prohibits operation of an sUAS at night • Operation during Civil twilight is allowed; but the sUA must be equipped with anti-collison lights that are capable of being visible for 3 statue miles (SM). • You can also get a waiver of Part 107.29

• For operational necessity, the remote PIC or person manipulating the controls may intentionally maneuver the UA so that he or she loses sight of it for brief periods of time. • VLOS must be accomplished and maintained by unaided vision that can be corrected by eyeglasses (spectacles) or contact lenses. • Vision aids such as binoculars, may be used only momentarily to enhance situational awareness. Photography by Jay Shears

Right of Way Rules • Each sUA must yield the right of way to all aircraft (even those n the ground) airborne vehicles and launch and reentry vehicles • An RPIC has a responsibility to operate the sUA so it remains clear of and yields to all other aircraft. “See & Avoid”

â&#x20AC;˘ No person may operate a sUAS over human being unless that human being is: â&#x20AC;˘ Directly participating in the operation of the unmanned aircraft or located under a covered structure or inside a stationary vehicle that can provide reasonable protection from a falling sUA Note: This activity is Waiver eligible

Operation around Airports • No person may operate a sUA in B, C, D, E unless that person has permission from the managing or controlling agency. – B = Big or Boeing and is colored Blue – C = Congested and is colored Red – D = Doghouse (I’ll explain) or Dash

Always has = a control tower

â&#x20AC;˘ No Person may operate a sUA in Prohibited or Restricted areas unless that person has permission from the managing or controlling agency

Part 107 Drone pilots who want to fly in controlled airspace, have to obtain airspace authorization/waiver.

• FAA Drone Zone Online Portal • Review the form instructions on the website your online application as soon as possible • Submit prior to the planned flight (at least 90 days prior) (Low Altitude Authorization & Notification • LAANC Capability) 2TAKEFLIGHT4U.COM

Think “Everybody” • Around some airports, Class E airspace begins at the surface, rather than the normal 700 or 1200 feet AGL • Outlined in a dashed magenta line on the sectional chart when beginning at the surface and magenta shading when starting at 700 feet

• Smaller towered airports/airspace • Typically 4 nm radius • Generally from the surface to 2,500 feet AGL • Usually reverts to Class E, when tower is closed • Outlined in a dashed blue on the sectional chart

Not a major issue

How is performance impacted?

Controllability and stalls? Sources of information

Same should go for drones

Practice in safe, forgiving location Not when results matter

Anti-authority: “Don’t tell me what to do!” Impulsivity: “Do it right now...quickly.” Invulnerability: “It won’t happen to me.” Machoism: “I can do it. I will show them.” Resignation: “What’s the use?”

At least 3 miles at control station

Obstructions near your location How tall are they? Towers ? Transmission lines?

Use manufacturer checklist, then add your localized anomalies: 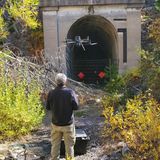 I bought a drone - now what?

I bought a drone - now what?