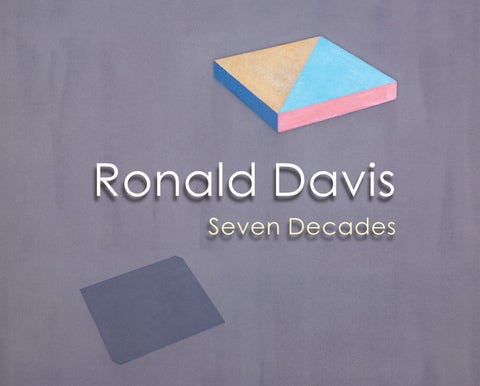 INTRODUCTION 203 Fine Art is pleased to present Seven Decades, a comprehensive survey of work by Ronald Davis, featuring significant pieces from the 1960s to the present. The exhibition celebrates Davis’s illustrious and ongoing career by featuring a wide range of work from the artist’s oeuvre. Selected from the artist’s studio, the exhibition includes artwork which has never been viewed publicly, as well as legacy works such as the keystone Dodecagon Series, many of which are in the permanent collections of major museums, emphasizing Davis’s important contribution to the American art scene. Through his explorations of space, color, time, form and ongoing adoption of new technologies, Ronald Davis continues to enrich the art world with his innovative techniques and concepts.

In the 1960s, Davis’s shaped canvases and polyester resin pieces explored optics, illusion and theories of perspective through hard-edge and painterly abstraction. These early techniques and style catapulted Davis from art student to internationally collected celebrity artist. Davis’s refinement of his own style and art practice over the following decades kept his work evolving, relevant and current.

Never exhibited, Two and One-Half Blocks and its mate, Open Cube, have been tucked away since the 1970s, until the staff of 203 Fine Art selected them for this exhibition.

In previous paintings, Davis would manually arrive at his geometric calculations. In 1988, he discovered using three-dimensional rendering software programs to design his paintings. Davis became an early pioneer using this digital medium. Employing new technologies of the time, it informed his paintings’ spatial perspective, precision and illusionary qualities. This aided Davis in further becoming a master of geometric perspective, paint handling, color and space.

Davis bought a plot of land on the Arroyo Hondo Mesa in 1991 as a New Mexico getaway. Eventually, he would sell his Malibu studio, which was his first collaboration in architecture and moved permanently to New Mexico in 1993. As a geometrician, Davis was inspired by

architecture and discovered the relationship between the Hogan dome and recurring shapes in his work. Davis collaborated with architect Dennis Holloway and anthropologist Charles Cambridge to build a Navajo inspired Hogan residence and studio, in which he lives and creates work to this day. After his departure from the LA art scene, Davis took a brief hiatus from painting. Between 1991 and 1994, he began creating wood sculptures. He would later return to painting in 1995, making a series of watercolors and an encaustic on wood, Wax Series.

Davis began a new series in the 2000s, creating more than sixtyfive new paintings over the course of a year. This work showcased painted shapes on expanded PVC plastic and Golden Acrylics which departed from Davis’s traditional “perspective grid” style. Many of these paintings still experiment with minimalism, flatness, and spatial illusions, but in unique, sculptural formations of the expanded PVC plastic.

Davis’s ongoing fascination with digital media, along with advancements in digital technology, resulted in the production of his digital paintings in the 2000s. This led to his Pixeldust series, which consist of many themed, digital renderings. These digital renderings are an extension of his geometric studies and are a testament to the influences that prevailed throughout the last seven decades of his work.

Davis has continued his creative process using the digital medium, but had not picked up a paint brush in several years. In late 2020, Davis returned to painting and the image on the following page show some of the artist’s newest works which will be included in this exhibition.

Ronald Davis attended the San Francisco Art Institute and the Yale-Norfolk Summer School of Music and Art. Davis was awarded a National Endowment for the Arts grant in 1968.

“If I’ve made any contribution at all, it is that counter to the glacial movement of serious twentieth century painting since Cézanne, towards flatness, I reintroduced the theorems of three-dimensional Renaissance mathematical perspective into my made objects - my constructions. This is my legacy, my contribution to the art history books. With this, I stumbled into a style of painting that can excavate walls.“ - Ronald Davis, 2002

203 Fine Art is pleased to present Seven Decades, a comprehensive survey of work by Ronald Davis, featuring significant pieces from the 1960...

203 Fine Art is pleased to present Seven Decades, a comprehensive survey of work by Ronald Davis, featuring significant pieces from the 1960...