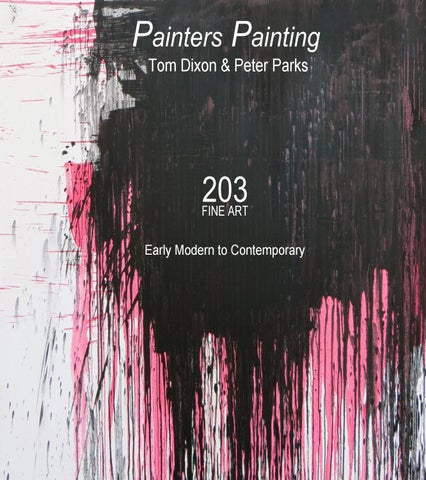 Painters Painting Tom Dixon & Peter Parks Best friends and two of the finest abstract artists in Taos, both Dixon and Parks share the same passion for creating their work. Living for the creation of art without intention or forethought, art that means something, that which evokes an emotion, a thought or reference to the human condition. Art with a quality that is recognizable. Both with similar stories of tirelessly struggling with the resolution of their paintings and finding the strength to continue, knowing they may never realize the true meaning or the intrinsic value of what they create. They are both true painters painting. Artists Reception: August 11th, 5 â&#x20AC;&#x201C; 8 pm, Exhibition: August 11th - September 3rd Gallery Open Daily by Appointment

Tom Dixon was born in 1947 on the east coast, and raised outside of Denver. As a teenager, he recalls being deeply impressed with a Franz Kline painting at the Denver Art Museum.  After the Army and Germany, Dixon returned to the Denver area where he attended commercial art school for a year and did paste-up and illustration for magazines in the late ‘60s.  In 1969 he moved to Chicago, and on the strength of letters of recommendation from several artists, he was accepted into the School of the Art Institute of Chicago for the next two years. In 1978 Tom Dixon moved to Taos, immediately turned his full focus to drawing and painting, and began showing hard-edged, non-objective work on paper at Dana Lesnett’s daring DEL Fine Arts on Kit Carson Road.  For the past 20 years, adjacent to a large parking lot, Dixon has lived and worked in a small studio with copious north light and an unobstructed view of Taos Mountain.  Dixon’s works on panel of multi-hued, obsessively layered oils appear physically attacked on a human scale.  Scraped, splashed, and scratched, each work is a scarred canvas of which has been effaced with infinite activity and pigmentation to make room for later painting, with original traces remaining.  Assaulted with a steel chisel, 10 inch brush, wide palette knives, or whatever is handy, the panels reveal buried graffiti and strata upon strata of history beneath, countered by lyric color combinations, calligraphic markings and, at times, geometric designs drawn in oil stick.

Peter Jackson Parks was born in New York in 1947. Living a colorful life, with his early childhood and youth spent living and traveling in Europe. Parks later served in Vietnam as a young adult in the Army, 173rd Airborne, from 1966 to 1967. With some formal art education after his service, Parks studied briefly at both the San Francisco Art Institute in the early 70â&#x20AC;&#x2122;s and the Art Students League of New York, in the early 80â&#x20AC;&#x2122;s, Peter mostly considers himself a self taught artist. His influences come from the early European expressionists and impressionists, as well as the abstract expressionists. Parks approaches his paintings with three elements in mind, the physical, psychological and spiritual, never intending to create a specific composition. The work is about the interplay of those elements to describe the human condition and the possibility of transcendence. His paintings are meant to be introspective, not always understood on the surface, but appreciated best through a process of discovery.

Located just 2 miles south of downtown Taos NM. We are a destination location, open by appointment, for a personalized art experience. Please call or email.

Best friends and two of the finest abstract artists in Taos, both Dixon and Parks share the same passion for creating their work. Living for...

Best friends and two of the finest abstract artists in Taos, both Dixon and Parks share the same passion for creating their work. Living for...