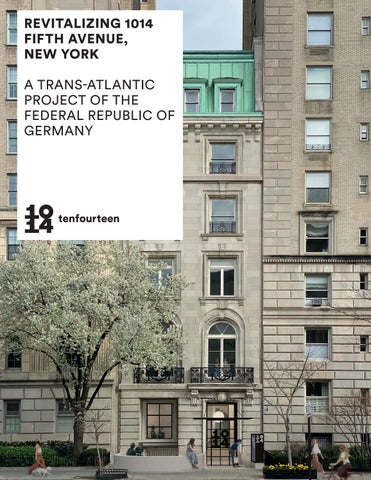 In 2021, the German government commissioned British architect Sir David Chipperfield, together with New York-based KARO Architects and Paratus Group, to convert the former Goethe House at 1014 Fifth Avenue in New York into a new platform for trans-Atlantic dialogue and exchange. An independent jury selected the Chipperfield design “An Open House / A Sharing House / A House as Home” over nine other anonymous proposals in the final round.

The six-story Beaux-Art style “We are grateful for Germany’s building in Manhattan’s continuous investment into Upper East Side, across from the trans-Atlantic partnership,” the Metropolitan Museum says Andreas Fibig, Chairman of Art, has belonged to the and President of 1014. Federal Republic of Germany since 1960. Once home to The jury chose the former U.S. Ambassador to Chipperfield design Berlin, James W. Gerard, because it creates a modern, it then served as the appealing, open, and headquarters of the Goethe- inviting public space while Institut New York. Since preserving the domestic 2017, 1014 Fifth Avenue has character of the townhouse. provided a space for ideas It is mindful of its history organized with the help of while opening the space for 1014 Inc., an independent contemporary, modern use. not-for-profit organization The beautiful building with founded upon the initiative a rich cultural tradition and of the German government trans-Atlantic legacy stands and the Goethe-Institut. once again on the cusp of change.

Having lived in the adjoining home at No. 1015 Fifth Avenue since 1919, former U.S. Ambassador James W. Gerard and his wife Mary “Molly” D. Gerard bought 1014 Fifth Avenue from their neighbors in 1926. Before moving in, the Gerards renovated and expanded the townhouse. After returning from Berlin in 1917, James W. Gerard devoted his efforts to Democratic Party politics as a speaker, fundraiser, and advisor. He decried antiSemitism in the U.S. and abroad and – as a confidant of Presidents Roosevelt and Truman – served as an envoy for the 1937 coronation of King Georg VI.

At 1014 Fifth Avenue, Mary and James Gerard hosted countless dinners and cocktail parties, often for international guests. Tapping into their network of political and judicial leaders, journalists, business moguls, and academics, they made their home a social hub that reverberated far beyond New York City. The Gerards pursuit for more equitable and just societies – nationally and internationally – started right in their home.

After James and Mary Gerard passed away in 1951 and 1956, their household employees received a large inheritance and continued living and working in the house, with full pay, for at least a few months. “I find a deep and bitter irony in the marvelous advances in science and technology which contrast so strangely with our backwardness in the art of living with one another.” James W. Gerard, 1951

Goethe House New York brought literature, film, music, art, science, and philosophy to 1014 Fifth Avenue. The organization was founded in 1955 as a New York-based nonprofit educational institute to strengthen U.S.-German cultural relations in the aftermath of the Second World War. It moved into the former Gerard mansion in 1961 after the German government purchased the building from the Gerard estate for $325,000.

In 1969, Goethe House became part of the global network of the GoetheInstitut. For nearly 50 years, it hosted lectures, exhibitions, screenings, concerts, and other cultural programs in the townhouse.

For many intellectuals driven out of Germany by the Nazi regime, the trauma of displacement did not kill their passion for literature, science, and the arts. The Goethe-Institut New York, through its programs and library, offered emigrants and refugees a link to new currents in German arts and letters – and the cultural heritage they had been forced to leave behind. Many renowned politicians, intellectuals, filmmakers, and artists from Germany as well as the United States met in Goethe House and turned it into a vibrant place for transAtlantic exchange.

In 2009, the Goethe-Institut New York re-established itself downtown. In 2016, the German parliament decided to allocate funds for a complete refurbishment of 1014 Fifth Avenue based on a modern and contemporary concept for its future use while building upon the rich cultural tradition and trans-Atlantic legacy of the renowned building.

A SPACE FOR IDEAS

To revitalize 1014 Fifth Avenue as part of Germany’s foreign cultural relations and education policy, the German Academy New York, Inc. was established in 2017 as a new intermediary organization with approval and funding from the German parliament. This New York-based nonprofit institution was renamed and branded “1014 – space for ideas” in 2019.

Cultural programming has accelerated during the past five years as 1014 has developed an online as well as a physical presence in the consular annex 1014 Fifth Avenue. To date, 1014 has hosted an array of exhibitions, performances, installations, lectures, and panel discussions, bringing together creatives from both sides of the Atlantic to address global topics. In each 1014 event, contemporary works and ideas are juxtaposed with the building’s historic interiors.

1014 offers a platform for trans-Atlantic exchange and dialogue across the worlds of culture, society, and ideas. Cooperating closely with partner organizations, 1014 brings together people from different backgrounds, fostering individual and institutional friendships that span continents.

Upon completion of the refurbishment, 1014 will also offer a residency program and invite pioneering thinkers and creatives to stay in its premises, creating an atmosphere of innovation, dialogue, and exchange throughout the building.

The proposal “An Open “The domestic quality of House / A Sharing House / the building is retained A House as Home” by and reinforced not just as a Chipperfield Architects, combination of new and old KARO Architects, and but as a seamless whole – a Paratus Group won the continuity of connected spaces design competition of allowing limitless possibilities.” the international tender David Chipperfield, Design procedure in 2021 organized Proposal, 2020 by Bundesbau BadenWürttemberg. The jury was composed of representatives of the German government, parliament, as well as independent architects and renowned experts in the cultural field. They awarded first place to the Chipperfield design, with its focus on bridging past and future. Working with the existing structure, Chipperfield only added what is necessary for modern use.

The Chipperfield design envisions a more welcoming Fifth Avenue entrance, a transparent rear façade, and multiple outdoor spaces. A new light-filled, two-storyhigh common room on the third level connects the public program areas in the lower half of the building with residential spaces above. The design also improves the building’s energy performance, accessibility, and life safety features.

“This approach embeds physical purpose in the existing and new spaces, giving 1014 new life, new vigour.” David Chipperfield, Design Proposal, 2020 Bundesbau BadenWürttemberg (BBBW) supervises the refurbishment of 1014 Fifth Avenue, one of the last townhouses along the Museum Mile in New York. Having experience with construction in the United States, BBBW was commissioned in 2018 by the Federal Ministry of Interior, Building, and Community (today: Federal Ministry of Housing, Construction and Urban Development) on behalf of the Federal Foreign Office to take on this task.

Thus, the 2016 decision of the German parliament to allocate funds for the revitalization of 1014 Fifth Avenue and to create a new “Leuchtturm” for trans-Atlantic dialogue and exchange is coming to fruition.

Some text passages are taken from the exhibition 1014 Past and Future www.1014pastandfuture.org by curator Gideon Shapiro. Design by büro uebele, Stuttgart

Design brochure of the refurbishment plans for 1014 Fifth Avenue by David Chipperfield Architects, KARO Architects, and Parts Group for the Federal Republic of Germany. Published by 1014 - space for ideas. 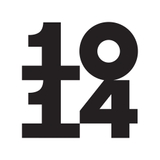