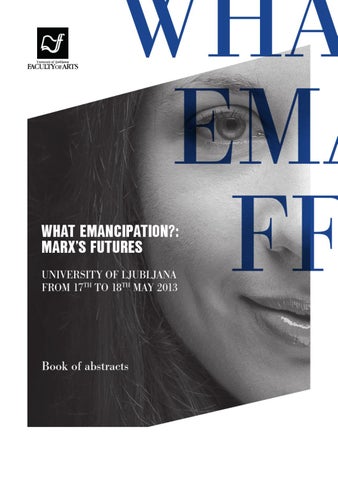 WHAT EMANCIPATION?: MARX’S FUTURES UNIVERSITY OF LJUBLJANA From 17th to 18th May 2013

Round Table and Closing Remarks Eduardo Cadava and Slavoj Žižek

“Marx Before Literature” This essay deals with Marx’s relation to literature. It seeks to give an account of 1) the Marx who is obsessed with literature as we generally understand it; 2) the Marx who so often used literature to analyze historical-political life; 3) the Marx who, despite his recourse to literature, nevertheless tells us that literature as such does not exist, since it is inscribed within an unevenly determined system of socio-historical and political practices and relations of production; and 4) the Marx who mourns literature, even as he writes it —who perhaps returns to literature most when he tells us it can never exist by itself, when he demonstrates that it is an essential element of every mode of representation, every technical media, and every technique of language. Indeed, Marx’s interest in literature is perhaps most legible when he no longer speaks of what we call novels, poetry, fiction, and fables, but rather when he instead refers to the illusions, hallucinations, phantoms, virtualities, and simulacra that increasingly compose our everyday existence. Eduardo Cadava teaches in the Department of English at Princeton University. He is the author of Words of Light: Theses on the Photography of History, Emerson and the Climates of History, and Fazal Sheikh: Portraits, and co-editor of Who Comes After the Subject?, Cities Without Citizens, and a special issue of the South Atlantic Quarterly entitled And Justice for All?: The Claims of Human Rights. He is currently completing a translation of Nadar’s memoirs, Quand j’étais photographe for MIT Press and a collection of essays on the ethics and politics of mourning entitled Of Mourning and Politics. His book Paper Graveyards: Essays on Art and Photography is forthcoming from Princeton University Press in 2014.

“A Case for Eurocentrism” Marx’s two short 1853 articles on India (“The British rule in India,” “The Future Results of British Rule in India”) are usually dismissed by postcolonial studies as embarrassing cases of Marx’s “Eurocentrism”; however, their lesson is today more actual than ever: »The question is, can mankind fulfill its destiny without a fundamental revolution in the social state of Asia? If not, whatever may have been the crimes of England she was the unconscious tool of history in bringing about that revolution.« One should not dismiss the talk of the »unconscious tool of history« as the expression of the trust into the Cunning of Reason which makes even the vilest crimes instruments of progress – the point is simply that the British colonization of India created conditions for the double liberation of India: from the constraints of its own tradition as well as from colonization itself. And, symmetrically, rejecting selfculpabilization, fully and – why not – proudly assuming one’s emancipatory heritage, is a sine qua non for the renewal of the Western Left. Slavoj Žižek is a Senior Research Fellow at the Department of philosophy, Faculty of Arts, University of Ljubljana, and Co-director of the Center for Humanities, Birkbeck College, University of London. He is the author of some thirty books, most recently notably Less than nothing (Verso 2012). His work has been translated into some twenty languages.

“The Proletarian as the Subject of the Unconscious” The paper discusses the specificity of Lacan’s reading of Marx within the broader history of attempts to link psychoanalysis with Marxism. It thereby focuses notably on the encounter of Marx and Freud’s theories of the subject, which can be discerned in their analysis of (socially productive and unconscious) labour. I will depart from Lacan’s claim that it was not Freud but Marx who invented the notion of the symptom. Through this invention the symptom became a critical notion and a logical counterpart of the fetish, on which Marx grounds his critique of the “capitalist worldview” (freedom, equality, property and Bentham, i.e. private interest). Marx accomplishes the move from the fetish to the symptom (from the apparent self-breeding power of capital to the decentralized subject) in his analysis of the capitalist transformation of labour. This analysis is of great importance for psychoanalysis, since Freud’s Interpretation of Dreams proposes nothing other than a “labour theory of the unconscious”. Finally the paper will address the ongoing political importance of Marx and Freud, whose politics of negativity remains a “bone in the throat” of the essentially capitalist vitalistic project of the “liberation of creative potentials (of labour, desire, etc.)”. Samo Tomšič is an Alexander von Humboldt fellow at the Institute of German Literature (Humboldt University in Berlin) and a research assistant at the Institute of Philosophy (SRC SASA in Ljubljana). He has written extensively on the philosophical implications of Freudian and Lacanian psychoanalysis, and on the legacy of French structuralism, as well as translated several authors from these fields. He is currently finishing a book on Lacan’s reading of Marx.

“Marx’s Brain” Why should we place Marx’s brain in a jar? The answer is obvious: to extract Marx’s thinking from the body of literature and interpretation that goes by the name of “Marxism.” That way, we can tap the energy of Marx’s grand thought experiments in Capital. This presentation uses the conceit of “Marx’s brain” to rethink what Marx is telling us about Hegel, fetishism, materialism, dialectics, the Middle Ages, and, of course, lava. Andrew Cole teaches in the English Department at Princeton University. He is a medievalist with research interests in heresy, humanism, medieval manuscripts, Chaucer, and Langland. He is the author of Literature and Heresy in the Age of Chaucer (Cambridge University Press, 2008). He also researches ancient, medieval, and continental philosophy, a combination of fields represented in his forthcoming book on the dialectic called The Birth of Theory. He often offers courses in theory that examine its roots in pre-modern thought. He has edited (with D. Vance Smith) The Legitimacy of the Middle Ages, with an afterword by Fredric Jameson (Duke University Press, 2010), and The Cambridge Companion to Piers Plowman (with Andrew Galloway, 2013). He has published articles on theory and philosophy, especially on the topic of German idealism and Marxism, including the muchdiscussed essay, “What Hegel’s Master/Slave Dialectic Really Means.”

“State or Revolution: Between Hegel’s Rabble and Marx’s Proletariat” According to the common opinion there is at least one place in Hegel’s system where he is forced to admit a contradiction that he is, however, unable to ‘sublate’, – the rabble (the other being, perhaps, the sexual difference). Since Marx evidently relied on Hegel’s rabble to develop his concept of proletariat, it has often been claimed that, what was the place of Hegel’s ultimate defeat, Marx turned into the subject of final emancipation. Against this widespread narrative we would like to, first, clarify what makes poverty and rabble a conceptual problem for Hegel; second, explain why Hegel wouldn’t have accepted the revolutionary solution proposed by Marx; and third, show that Hegel was, at least in principle, able to resolve the problem by resorting to the state as the place of universal. Consequently, we would suggest that what Marx’s emancipation project needs is a theory of the state. Zdravko Kobe is Associate Professor at the Department of Philosophy, Faculty of Arts, University of Ljubljana, specializing in German Idealism. His book publications in Slovene include three monographic studies of Kant’s philosophy published so far only in Slovene (Automaton transcendentale I: Kant’s Way to Kant, 1995; Automaton transcendetale II: Critique of Pure Reason, 2001; Three Studies in Kant’s Practical Philosophy, 2008). English translation is forthcoming. He is also the Slovene translator of Hegel’s Logic and Kant’s Critique of Pure Reason, as well as the author of a number of interventions in contemporary philosophy.

“From Emancipation to the Science of Work: The Labor Power Dilemma” In the age of thermodynamics nature was perceived as a potentially inexhaustible and infinitely accessible source for the conversion of productive power or energy to social use. Drawing on Hermann von Helmholtz, the first German thinker to consistently employ the terms “Arbeitskraft,” Marx and Engels saw the broader social implications of thermodynamics for political economy. This paper argues that until the late 1850s Marx saw labor in largely Hegelian terms, as man’s self-creation through history, and above all as the uniquely creative impulse that would ultimately be restored from its alienated condition. After 1859 however, Marx increasingly regarded the distinction between concrete and abstract labor in the language of labor power, as an act of conversion rather than generation. Put another way, Marx superimposed a thermodynamic model of labor over the ontological model of labor he inherited from Hegel. As a result, labor power became quantifiable and equivalent to all other forms of labor power (in nature or in machines). Marx readily adopted this language of “labor power” which became the engine of historical development. Marx thus shifted his focus from the emancipation of mankind through labor, to emancipation from productive labor by an even greater productivity, since the productivity of the machine is measured by the extent to which it replaces human labor power. In the 1880s, this line of thought was developed by the Ukrainian physician and socialist Sergei Podolinsky (1850-1891), who, persistently tried to persuade Marx and Engels of the importance of entropy, e.g., that there are natural, e.g., overriding physical limits, to the conversion of energy that supersedes even the social relations of production.

Anson Rabinbach is Professor of History at Princeton University. He is the author of The Crisis of Austrian Socialism: From Red Vienna to Civil War 1927-1934 (The University of Chicago Press, 1983); The Human Motor: Energy, Fatigue and the Origins of Modernity (Basic Books, 1990); In the Shadow of Catastrophe (The University of California Press); Begriffe aus dem Kalten Krieg: Totalitarismus, Antifaschismus, Genozid (Wallstein Verlag. 2009), and he is co-editor (With Sander Gilman) of The Third Reich Sourcebook (The University of California Press, 2013). He is also co-founder and editor of New German Critique.

“Marx’s Clinamen – What materialism?” The paper will take a closer look at Marx’s Dissertation, the very early work which presents Marx before Marx. It will follow Marx’s construction of the opposition between Democritus and Epicurus, which largely hinges on the question of how to conceive clinamen, and hence the very possibility of human freedom and the critique of mechanical materialism. Marx’s intervention into the history of materialism also has a subplot of an intervention into the post-Hegelian theoretical conjuncture, his reading of the opposition between the Kantian and the Hegelian legacy. The problem of clinamen will be pursued through some contemporary philosophies which have taken it up (Althusser, Deleuze, Lacan, Badiou). From there the larger question will be posed about the nature of materialism, of Marx’s subsequent takes on it and of a possible future of materialism. Mladen Dolar is Professor at the Department of Philosophy, Faculty of Arts, University of Ljubljana. He is the author of some ten books, mostly published in Slovene, and over 100 papers, mostly bearing on Hegel, psychoanalysis and the contemporary French philosophy. In English most notably A Voice and Nothing More (MIT 2006, translated into six languages). He is the editor of the journal Problemi and the book series Analecta. 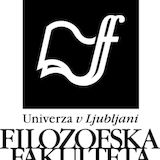