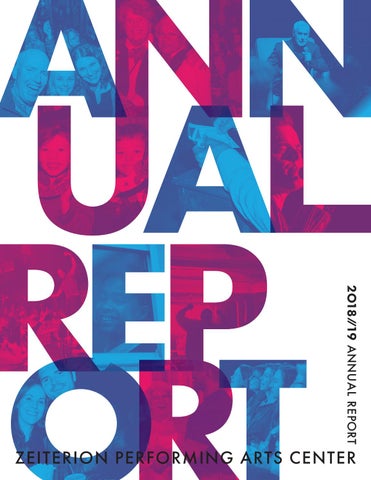 IN THIS HISTORIC THEATER,

we come together to be in the company of artists who connect us to a feeling, a time, an expression, and to each other. Ideas, inspiration, education, and pure enjoyment. You made it possible to experience it all together at The Z. On the following pages, we invite you to witness the impact of your investment on the Zeiterion and our community.

MISSION The Zeiterion Performing Arts Center entertains, educates, and inspires our community by presenting a diverse array of high quality performing artists and providing engaging learning opportunities that contribute to the cultural, social, and economic vitality of the Southcoast.

…BROUGHT JOY TO ALL AGES

MAKING IT POSSIBLE FOR 91,000 PEOPLE TO CONNECT

You made it possible for The Z to connect 91,000 audience members to some of the best performing artists from around the world during the 2018/2019 season. We connected in our shared human experience, made lasting memories, and felt pride for where we live.

You constantly surprise and amaze variety and quality of entertaine

connected at exciting shows like iLuminate, ° Generations Drumline Live and The New Chinese Acrobats. music acts including Bernadette Peters, Postmodern ° Incredible Jukebox, and Experience Hendrix thrilled audiences. diverse Stage Door Live! line-up featured a variety of ° Aartists from mentalist Jon Stetson, to the rocking Ward Hayden and the Outliers, to the funky sounds of Banda Magda. classics like The Rainbow Fish, The Very Hungry ° Children’s Caterpillar, and Angelina Ballerina helped create new memories and transported parents back to their youth. 2 I ZEITER I ON P E R FOR M I NG A R TS C E NT E R

Bernadette Peters at The Z

me with the ers you entice to little New Bedford.

The Z’s Education programs would not be what they are today without your support. In 2018/2019, you made it possible for 19,864 students of all ages to connect with the arts through the SchoolTime performance series, Lights Up! Musical Theater Summer Camp, Page to Stage, and Creative Classroom.

backbone of our education programs, the ° The 2018/2019 SchoolTime performance series served 18,730 students. Lights Up! Musical Theater Camp connected 63 ° The children ages seven to fifteen for a week-long intensive in the performing arts. fourth and fifth graders participated in Dartmouth ° 365 and New Bedford through the in-school Page to Stage Literacy Project.

Teen Ambassadors spent the season taking a deep ° The dive into the performing arts and community service, reviewing seven performances at The Z and volunteering a total of 180 hours to local organizations. students of all ages learned to play guitar, dance ° 176 salsa, and more from expert teaching artists in the Zeiterion Creative Classroom.

who are often disengaged in elves in the Page to Stage program.

It is thanks to your support that The Z can commit to the continued presentation of dance performances. A stand-out of the 2018/2019 season was Ballet Hispanico, America’s leading Latino dance organization. With Ballet Hispanico as a partner, we took a deep dive into Latino dance culture that went beyond the stage and into the community.

I attended [Ballet Hispanico] with my ...Thank you for bringing this

engaging SchoolTime performance allowed students in grades ° An three to twelve to learn about the creation of each dance piece and got them out of their seats and dancing in the aisles. 129 students attended this performance on scholarship. captivating Mainstage show wowed audiences, ° Aincluding 531 attendees who received free tickets through our Arts Access programs.

11-year-old daughter and we loved it world-class group to New Bedford!

Like you, we believe the performing arts should be accessible to everyone in our community. You support programs like EBT Card to Culture, education scholarships, free community events and more that ensure everyone feels welcome at The Z.

I’m very thankful for this opportunity, as it allowed our family

tickets were sold at just $5.00 each through ° 671 the EBT Card to Culture program. free community tickets were distributed to ° 443 community members through organizations like Child and Family Services and Vet Tix. $10,000 in scholarships connected ° Over children to the performing arts through both the SchoolTime Performance Series and the Lights Up! Musical Theater Camp.

free community events took ° 27 place at The Z, ranging in size from pre-show talks with artists to entire festivals. 8 I ZEITER I ON P E R FOR M I NG A R TS C E NT E R

Drumline Live brought the audience to their feet

to create some awesome memories

Listing reflects contributions made between October 1, 2018 and September 30, 2019

THE MUSE SOCIETY WAS CREATED IN RECOGNITION OF THIS EXTRAORDINARY GROUP OF SUPPORTERS WHO DEMONSTRATE THEIR BELIEF IN THE POWER OF THE PERFORMING ARTS WITH THEIR LEADERSHIP GIFTS. Frank and Denise Almeida Deborah and Benjamin Baker Hope Lincoln Baker Talbot Baker, Jr. Margherita and Michael Baldwin Peg and Ed Barry Christina and Charles Bascom Leslie and Bob Bernert John and Linda Bodenmann Bettina Borders and Victor Mailey Jack and Nancy Braitmayer Andrew and Amy Burnes

Listing reflects contributions made between October 1, 2018 and September 30, 2019

LISTING REFLECTS CONTRIBUTIONS MADE BETWEEN OCTOBER 1, 2018 AND SEPTEMBER 30, 2019

Honoring those with 20+ years of service

Special thanks to the graphic design team at Mediumstudio.