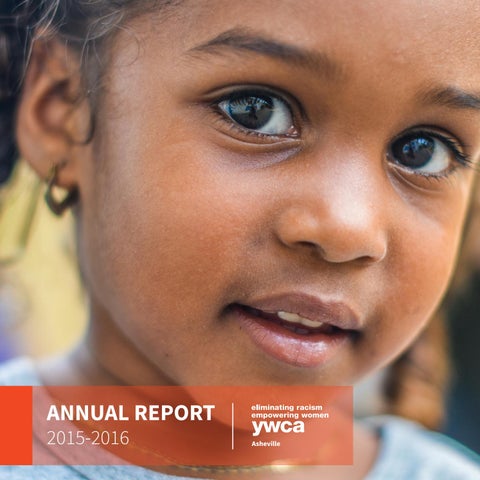 YWCA IS ON A MISSION TO ELIMINATE RACISM, EMPOWER WOMEN, AND PROMOTE PEACE, JUSTICE, FREEDOM AND DIGNITY FOR ALL.

Dear YWCA Family and Friends, As I reflect on the accomplishments of our 2015-2016 fiscal year, I solemnly acknowledge the losses we are poised to face in our current climate. The strides that we have made for women and people of color in our community and our country are in jeopardy. But, I am reminded that throughout our history the YWCA has stood strong in the face of injustice and we will continue to bridge gaps in earning power, education, health, and racial justice. The YWCA is as committed as ever to eliminating racism, empowering women and creating a stronger community through our advocacy and programming. In the last year we have led efforts to create real change for the people we serve in several areas: • After hearing how our MotherLove participants were struggling to go back to school after just four weeks maternity leave, the YWCA stood with them. Together we advocated with local doctors who ultimately increased the approved maternity leave from four weeks to six weeks in Buncombe County Schools. Young mothers deserve sufficient time to heal and bond with their new babies and together we changed a policy that was not serving women and infants in our community. • Prompted by the tragic events in Ferguson, MO and Staten Island, NY, YWCA joined with allied community partners to form the Racial Justice Coalition. The goal of this coalition was to have a more unified voice in responding to these tragedies, and to build better relations between communities of color and law enforcement. Most recently we helped to inform the Asheville Police Department’s new use of force policies with an emphasis on de-escalation to reduce incidents of violence. • In response to the unbelievable news that there were only 6 child care vacancies in our entire county, the YWCA led the charge to bring more awareness to the child care crisis in our community. Through strategic partnerships with the Verner Center for Early Learning and AB Tech we increased our capacity to serve more children. Women’s economic security hinges on access to affordable, quality child care and we will continue our work to ensure it is available to all. As I look towards the YWCA of Asheville’s 110th Anniversary in May 2017, I am honored that you are part of our rich legacy. I invite you to join us as we forge ahead in our work towards our mission to eliminate racism, empower women and promote peace, justice, freedom and dignity for all in the years to come. In solidarity,

IMPACT BY THE NUMBERS ELIMINATING RACISM

Stand Against Racism Campaign 64 different organizations, businesses, and groups in Asheville-Buncombe participated in last yearâ&#x20AC;&#x2122;s Stand, consisting of 37 public Stand events and thousands of community members in attendance! It was one of the largest Stand events nationwide. Stand Against Racism builds community among those who work for racial justice and raises awareness about the negative impact of institutional and structural racism in our communities.

Racial Justice The Racial Justice Coalition (RJC), co-led by the YWCA of Asheville, worked together upon the shared value of racial justice to build a cohesive vision for a safer, more just community. The RJC participated in a community-wide revision of the Asheville Police Departmentâ&#x20AC;&#x2122;s use of force policy with an emphasis on de-escalation strategies and trainings.

Women enrolled in the Getting Ahead Program

Getting Ahead Last year, 43 women enrolled in Getting Ahead case management, including 24 new graduates. 6 participants accessed financial counseling; 2 paid off a combined total of 4 credit cards and 1 dramatically increased her credit score; 2 acquired safe, affordable housing and 2 more are on the road to home ownership; 1 participant secured a conventional loan to purchase a car; 3 completed or are enrolled in educational programs and 3 enrolled in career training with Goodwill; and 8 increased their incomes with 1 participant advocating with her employer to be paid a living wage, which led to increased income for all entry level workers at that company!

Children were cared for by our ECC professionals

Empowerment Child Care (ECC) 201 children were cared for in a safe, nurturing environment by child care professionals and trained volunteers. During this time, the YWCAâ&#x20AC;&#x2122;s ECC prepared for significant expansion and partnerships with the Family Justice Center and AB Tech to serve more children.

WERE REPORTED IN THE U.S ON AVERAGE ACCORDING TO THE CDC

Children At-Risk Drowning is the leading cause of unintentional death for children ages 5 18 and African American children are six times more likely to drown than white children.

Addressing the Problem The YWCA aims to address this disparity in our community through our Aquatics Program. We offer free swim lessons to children in our Early Learning Program, as well as scholarships for older children who otherwise would not have access to swim lessons.

STAND AGAINST RACISM The YWCAâ&#x20AC;&#x2122;s Stand Against Racism is a partnership of YW USA to build community among those who work for racial justice and to raise awareness about the negative impact of institutional and structural racism. This campaign is one part of our larger strategy to fulfill our mission of eliminating racism.

I love spending time with my counselors and they have helped me a lot with my homework.

The YWCA Primary Enrichment Program focuses on keeping young minds and bodies active during the school year - and all summer long! Through academic support and daily reading, our After School and Summer Camp programs aim to help young students succeed in school and combat summer learning loss.

ACHIEVING DREAMS As a young mom Sue Ellen didnâ&#x20AC;&#x2122;t have the opportunity to go to college. Years later, after watching her husband go back to school and start his own business, Sue Ellen knew that she was ready for something more for herself. But with the high cost of child care and two young daughters at home, going back to school was out of reach for Sue Ellen. Fortunately, she found the Empowerment Child Care program at the YWCA, which provided free child care so she could pursue her education. In May 2016, Sue Ellen graduated - with high honors - from A-B Techâ&#x20AC;&#x2122;s Office Administration program. She is excited to help provide a better life for her family and achieve her dreams.

E. Thelma Caldwell was named Executive Director of the YWCA of Asheville in 1965, becoming the second African American to lead a newly integrated YWCA association in the nation and the first in the South. Under Thelma’s executive leadership from 1965—1975 the physical integration of the Black and White branches of Asheville’s YWCA was realized. In 1976, in response to new challenges the YWCA faced regarding race and fundraising, a group of retired Black board members formed the YWCA Booster Club. Later joined by White members committed to integration, the Boosters worked tirelessly to carry on Thelma’s work. Named for Thelma Caldwell and dedicated to the women of the Booster Club, our Legacy Society members’ generosity and foresight through planned giving ensures our organization’s resiliency and lasting impact for years to come.

In 1956, Eleanor Roosevelt visited Asheville on tour for the United Nations and would only agree to speak to an integrated audience. The YWCA of Asheville was the only organization that would host the event, and Eleanor Roosevelt spoke to a sold out crowd of over 800 people. Eleanor Roosevelt was a bold, confident woman. She was a fearless visionary and a champion for civil rights. It is in her honor that the YWCA of Asheville named our giving society, whose members do so much to support the YWCA mission. The members of the Eleanor Roosevelt Giving Society recognize the importance of sustainable support for YWCA’s mission-based work. Our members make commitments of $1,000 or more per year for five years, which helps the YWCA plan and address our most urgent needs.

EMPOWER HOUR TOURS The YWCA invites you to join us for Empower Hour, a one-hour program and tour where you will experience firsthand the YWCA’s work to bridge gaps in education, earning power, health and wellness and access to child care. Empower Hours take place several times a month at our location at 185 S. French Broad Avenue. As lunch is served as part of Empower Hour, reservations are required. To make a reservation, contact : Stephanie Tullos (828)254-7206 ext. 2017 stullos@ywcaofasheville.org

Are you interested in our giving or legacy societies? Please contact Stephanie Tullos at 828.254.7206 x207 or stullos@ywcaofasheville.org for more information.

SAVE THE DATE YWCA 110th Anniversary Celebration May 11, 2017, 6-8:00 PM at UNCA Lipinsky Auditorium Since 1917, YWCA of Asheville has been eliminating racism and empowering women in our community. Join us as we celebrate our rich history with a reception and presentation in honor of our 110th year of service. 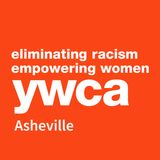