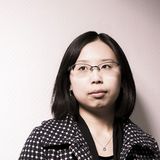 Yukiko Watanabe is a composer, born in 1983 in Nagano (Japan). Yukiko Watanabe has studied both composition and piano at Toho Gakuen School of Music Japan with Keiko Harada and Michio Mamiya. 2008 she moved to Austria and studied with Beat Furrer at Kunstuniversität Graz: awarded Master of Musik-Komposition with highest distinction in 2012. Her studies have been supported by Nomura Cultural Foundation (2008), Rohm Music Foundation (2009-2012), Japanese Agency for Cultural Affairs (2013-2014), and DAAD (2014, 2015). In 2011, her score has been published by Universal Edition as part of her award Ö1 Talentebörse-Kompositionspreise. In 2016 she won the Akutagawa Award for Music Composition with her orchestral work “gefaltet…”. After graduating from her Konzertexamen degree at the Hochschule für Musik Köln under Johannes Schöllhorn. She was the recipient of the “International Ensemble Modern Academy Scholarship” (2016/17) in Frankfurt and Kunststiftung NRW im Künstlerdorf Schöppingen 2018.