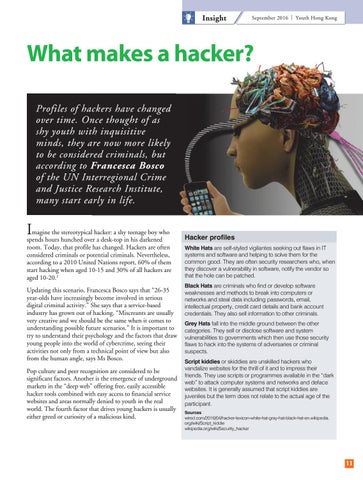 What makes a hacker? Profiles of hackers have changed over time. Once thought of as shy youth with inquisitive minds, they are now more likely to be considered criminals, but according to Francesca Bosco of the UN Interregional Crime and Justice Research Institute, many start early in life.

magine the stereotypical hacker: a shy teenage boy who spends hours hunched over a desk-top in his darkened room. Today, that profile has changed. Hackers are often considered criminals or potential criminals. Nevertheless, according to a 2010 United Nations report, 60% of them start hacking when aged 10-15 and 30% of all hackers are aged 10-20.1 Updating this scenario, Francesca Bosco says that “26-35 year-olds have increasingly become involved in serious digital criminal activity.” She says that a service-based industry has grown out of hacking. “Miscreants are usually very creative and we should be the same when it comes to understanding possible future scenarios.” It is important to try to understand their psychology and the factors that draw young people into the world of cybercrime, seeing their activities not only from a technical point of view but also from the human angle, says Ms Bosco. Pop culture and peer recognition are considered to be significant factors. Another is the emergence of underground markets in the “deep web” offering free, easily accessible hacker tools combined with easy access to financial service websites and areas normally denied to youth in the real world. The fourth factor that drives young hackers is usually either greed or curiosity of a malicious kind.

Hacker profiles White Hats are self-styled vigilantes seeking out flaws in IT systems and software and helping to solve them for the common good. They are often security researchers who, when they discover a vulnerability in software, notify the vendor so that the hole can be patched. Black Hats are criminals who find or develop software weaknesses and methods to break into computers or networks and steal data including passwords, email, intellectual property, credit card details and bank account credentials. They also sell information to other criminals. Grey Hats fall into the middle ground between the other categories. They sell or disclose software and system vulnerabilities to governments which then use those security flaws to hack into the systems of adversaries or criminal suspects. Script kiddies or skiddies are unskilled hackers who vandalize websites for the thrill of it and to impress their friends. They use scripts or programmes available in the “dark web” to attack computer systems and networks and deface websites. It is generally assumed that script kiddies are juveniles but the term does not relate to the actual age of the participant. Sources wired.com/2016/04/hacker-lexicon-white-hat-gray-hat-black-hat-en.wikipedia. org/wiki/Script_kiddie wikipedia.org/wiki/Security_hacker