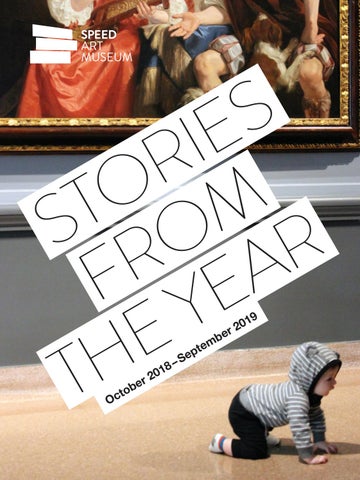 on itself. These shows spanned time, from the abstract paintings by 42-year old (and Louisville-born) Keltie Ferris to the beauty and cultural history of “tall-case clocks” from the early 1900s.

And they spanned cultures, from the great artists who worked with Hunter S. Thompson in “Gonzo” to a beautiful and

For the Speed, the year that ended on September 30, 2019 really showed what we mean when we say “we invite everyone to celebrate art, forever.”

complicated view of violence and race in the work of former UK professor Ebony G. Patterson. More than ever, the Speed IS Kentucky’s art museum. Forever

We hosted the first Naturalization

Sometimes “forever” is more of a spirit

Ceremony in the “new” Speed on

than a fact. In the Speed’s 93rd year

we lost David Vereen, a member of

place where they became a citizen,

our security team who went through

and I am delighted that 95 new citizens

two transplant surgeries and gave the

from 36 countries became citizens at

the Speed. We also signed up half of

was among the best of us because he

them for “Speed for All,” the free family

brought out the best in us, and while I

membership that has now reached

know his spirit lives on in the museum

Speed Café for David, someone I think Hattie Bishop Speed would have loved as much as the rest of us did.

From the Chair, Board of Trustees In my first year as

This year our family grew in other

Circle formed to gather supporters from

across Kentucky. A Corporate Council

to see the Speed community grow

gathered local CEOs and executives who

in so many ways.

believe (and invest) in our mission and encourage others to join them. And to

Our Board of Trustees is full of people

the collector groups that have supported

who represent the special strengths that

art acquisitions for over 50 years (Charter

make Louisville great, all grounded in

generosity and thoughtful attention to

our mission. Our Board of Governors

our curators and their work: Cinephiles,

represents all aspects of a community

Speed Design, and the Art on Paper

and region we love. This year we

reconfirmed the importance of our Alliance of Volunteers, built on decades

The best families grow while also

of volunteer service and now modeled

maintaining strong ties around the

in our Docents, volunteers, and all of us

who give time and attention (and dollars)

am delighted that the Speed family is

growing while also growing stronger, more connected by an institution with a mission they also share and love.

The day was made even more special

from 36 different countries, took their

because of our partnership with the

Oath of Allegiance to become United

League of Women Voters, there to make

States citizens at the naturalization

sure the new citizens were registered to

ceremony we hosted. The path to

vote, and our Speed for All team, offering

citizenship is often difficult, and never

all the new citizens memberships to

done lightly. We’re grateful that the

Speed got to be a part of that journey for these 95 new citizens.

We invited families to grow up at the Speed. The Speed Education team welcomed

This year, the Museum also began

Speedâ&amp;#x20AC;? by offering programs for guests

ages 0 and up! Museum Play Dates:

created a new way for families with

young children to experience the Speed,

workshops, storytime in the galleries,

better formatted for their needs, with

family tours of exhibitions, and more!

Our Community Outreach team was able

hands-on activities such as block-

to partner with several organizations in

creating special family programming for our Speed for All members, helping to welcome them to the Museum.

We restored artworks. The Adopt an Artwork program,

“What’s New at the Speed,” the Gallery

designed to create opportunities for

patrons to support the conservation of

yielding incredible results within our

partnered with the Archdiocese of

collection after its implementation just a

Louisville, to whom the painting belongs,

few years ago. Several of these works,

to facilitate a massive conservation effort

including intimate sketches and delicate

to restore this masterpiece to its former

and Seurat, are now on view in Gallery 1

Maries) and the story of its restoration are

Liabilities and Net Assets Accounts payable and other liabilities

Total Assets listed do not include the value of the Museum’s Collection.

Learn more about our year. speedmuseum.org/annual-report