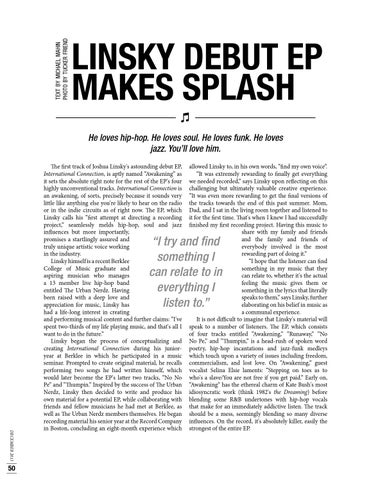 The first track of Joshua Linsky&#39;s astounding debut EP, International Connection, is aptly named “Awakening” as it sets the absolute right note for the rest of the EP&#39;s four highly unconventional tracks. International Connection is an awakening, of sorts, precisely because it sounds very little like anything else you&#39;re likely to hear on the radio or in the indie circuits as of right now. The EP, which Linsky calls his “first attempt at directing a recording project,” seamlessly melds hip-hop, soul and jazz influences but more importantly, promises a startlingly assured and truly unique artistic voice working in the industry. Linsky himself is a recent Berklee College of Music graduate and aspiring musician who manages a 13 member live hip-hop band entitled The Urban Nerdz. Having been raised with a deep love and appreciation for music, Linsky has had a life-long interest in creating and performing musical content and further claims: “I&#39;ve spent two-thirds of my life playing music, and that&#39;s all I want to do in the future.” Linsky began the process of conceptualizing and creating International Connection during his junioryear at Berklee in which he participated in a music seminar. Prompted to create original material, he recalls performing two songs he had written himself, which would later become the EP&#39;s latter two tracks, “No No Pe” and “Thumpin.” Inspired by the success of The Urban Nerdz, Linsky then decided to write and produce his own material for a potential EP, while collaborating with friends and fellow musicians he had met at Berklee, as well as The Urban Nerdz members themselves. He began recording material his senior year at the Record Company in Boston, concluding an eight-month experience which

allowed Linsky to, in his own words, “find my own voice”. “It was extremely rewarding to finally get everything we needed recorded,” says Linsky upon reflecting on this challenging but ultimately valuable creative experience. “It was even more rewarding to get the final versions of the tracks towards the end of this past summer. Mom, Dad, and I sat in the living room together and listened to it for the first time. That&#39;s when I knew I had successfully finished my first recording project. Having this music to share with my family and friends and the family and friends of everybody involved is the most rewarding part of doing it.” “I hope that the listener can find something in my music that they can relate to, whether it&#39;s the actual feeling the music gives them or something in the lyrics that literally speaks to them,” says Linsky, further elaborating on his belief in music as a communal experience. It is not difficult to imagine that Linsky&#39;s material will speak to a number of listeners. The EP, which consists of four tracks entitled “Awakening,” “Runaway,” “No No Pe,” and “Thumpin,” is a head-rush of spoken word poetry, hip-hop incantations and jazz-funk medleys which touch upon a variety of issues including freedom, commercialism, and lost love. On “Awakening,” guest vocalist Selina Elsie laments: “Stepping on toes as to who&#39;s a slave/You are not free if you get paid.” Early on, “Awakening” has the ethereal charm of Kate Bush&#39;s most idiosyncratic work (think 1982&#39;s the Dreaming) before blending some R&amp;B undertones with hip-hop vocals that make for an immediately addictive listen. The track should be a mess, seemingly blending so many diverse influences. On the record, it&#39;s absolutely killer, easily the strongest of the entire EP.

“I try and find something I can relate to in everything I listen to.”

Your Magazine is a publication by Emerson College students, bringing you the newest trends, the best student work, and helpful tips for navigating the urban college lifestyle. 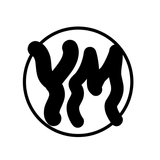