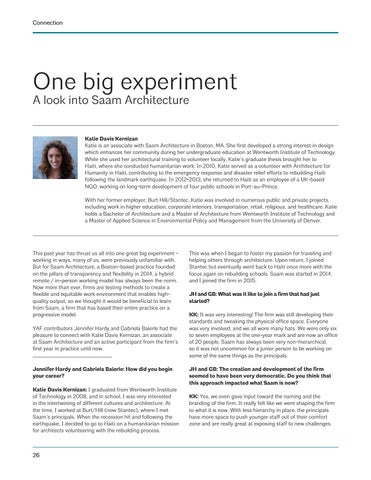 One big experiment A look into Saam Architecture

Katie Davis Kernizan Katie is an associate with Saam Architecture in Boston, MA. She first developed a strong interest in design which enhances her community during her undergraduate education at Wentworth Institute of Technology. While she used her architectural training to volunteer locally, Katieâ&amp;#x20AC;&amp;#x2122;s graduate thesis brought her to Haiti, where she conducted humanitarian work. In 2010, Katie served as a volunteer with Architecture for Humanity in Haiti, contributing to the emergency response and disaster relief efforts to rebuilding Haiti following the landmark earthquake. In 2012-2013, she returned to Haiti as an employee of a UK-based NGO, working on long-term development of four public schools in Port-au-Prince. With her former employer, Burt Hill/Stantec, Katie was involved in numerous public and private projects, including work in higher education, corporate interiors, transportation, retail, religious, and healthcare. Katie holds a Bachelor of Architecture and a Master of Architecture from Wentworth Institute of Technology and a Master of Applied Science in Environmental Policy and Management from the University of Denver.

This past year has thrust us all into one great big experiment working in ways, many of us, were previously unfamiliar with. But for Saam Architecture, a Boston-based practice founded on the pillars of transparency and flexibility in 2014, a hybrid remote / in-person working model has always been the norm. Now more than ever, firms are testing methods to create a flexible and equitable work environment that enables highquality output, so we thought it would be beneficial to learn from Saam, a firm that has based their entire practice on a progressive model. YAF contributors Jennifer Hardy and Gabriela Baierle had the pleasure to connect with Katie Davis Kernizan, an associate at Saam Architecture and an active participant from the firmâ&amp;#x20AC;&amp;#x2122;s first year in practice until now.

Jennifer Hardy and Gabriela Baierle: How did you begin your career? Katie Davis Kernizan: I graduated from Wentworth Institute of Technology in 2008, and in school, I was very interested in the intertwining of different cultures and architecture. At the time, I worked at Burt/Hill (now Stantec), where I met Saamâ&amp;#x20AC;&amp;#x2122;s principals. When the recession hit and following the earthquake, I decided to go to Haiti on a humanitarian mission for architects volunteering with the rebuilding process.

This was when I began to foster my passion for traveling and helping others through architecture. Upon return, I joined Stantec but eventually went back to Haiti once more with the focus again on rebuilding schools. Saam was started in 2014, and I joined the firm in 2015. JH and GB: What was it like to join a firm that had just started? KK: It was very interesting! The firm was still developing their standards and tweaking the physical office space. Everyone was very involved, and we all wore many hats. We were only six to seven employees at the one-year mark and are now an office of 20 people. Saam has always been very non-hierarchical, so it was not uncommon for a junior person to be working on some of the same things as the principals. JH and GB: The creation and development of the firm seemed to have been very democratic. Do you think that this approach impacted what Saam is now? KK: Yes, we even gave input toward the naming and the branding of the firm. It really felt like we were shaping the firm to what it is now. With less hierarchy in place, the principals have more space to push younger staff out of their comfort zone and are really great at exposing staff to new challenges.

What should the profession look like on the other side of a global pandemic? Young architects are exploring innovative practice models, unconventional career paths, and resilient business frameworks in response to changing local and global contexts. 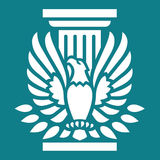 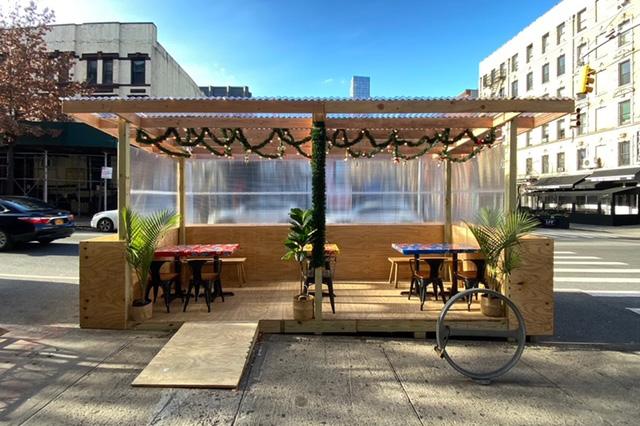