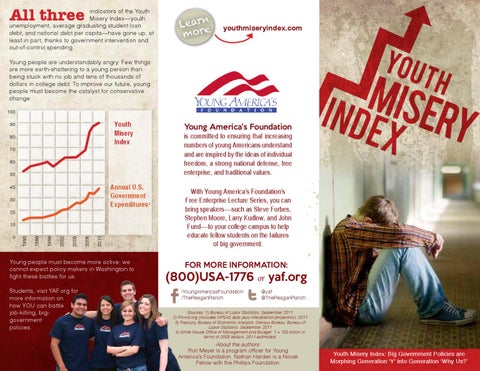 indicators of the Youth Misery Index—youth unemployment, average graduating student loan debt, and national debt per capita—have gone up, at least in part, thanks to government intervention and out-of-control spending.

Young people are understandably angry. Few things are more earth-shattering to a young person than being stuck with no job and tens of thousands of dollars in college debt. To improve our future, young people must become the catalyst for conservative change. 100

Young people must become more active; we cannot expect policy makers in Washington to fight these battles for us. Students, visit YAF.org for more information on how YOU can battle job-killing, biggovernment policies.

Young America's Foundation is committed to ensuring that increasing numbers of young Americans understand and are inspired by the ideas of individual freedom, a strong national defense, free enterprise, and traditional values.

About the authors: Ron Meyer is a program officer for Young America’s Foundation. Nathan Harden is a Novak Fellow with the Phillips Foundation.

The government is largely responsible for all three problems. We’ve found a statistically significant relationship between government expenditures and the Youth Misery Index; this is no coincidence. Each indicator can be linked to government actions.

Young people today face a three-pronged attack on their financial security—educational debt from their past, unemployment in the present, and a future plagued by the burden of massive government debt.

Each young person will inherit a massive share of government debt, and the interest alone is enough to cripple our economic future. This year, the interest payments are more than $3,000 per taxpayer, and this number will at least double by the end of the decade. As this cost increases, the government will probably either choose to raise taxes or take out more loans to pay the interest— both of which remove capital from the private sector—further compounding the problem.

The Youth Misery Index has reached a record high (90.6) and has grown more than 25 percent in four years—17 percent since the Obama administration took office.

Bottom line: Young people are battling one of the worst job markets in the last century, and hundreds of billions of federal “stimulus” dollars have failed to revive the labor market.

Young people, typically, offer cheaper labor than their counterparts. However, older, more experienced workers—who can’t find higher-paying jobs—are settling for starter jobs historically held by youth. Time reports that 85 percent of 2011 graduates moved back home after college. For those who do find work, the median graduating income has dropped by more than 10 percent.

National Debt per capita (in thousands)

The youth unemployment rate has actually improved slightly over the last two years. But that doesn’t mean things have gotten better. In the summer of 2010, the Labor Department recorded the lowest youth labor force participation rate in history. Therefore, it seems many young people have simply given up on finding jobs.

Youth unemployment is at 17.4 percent—one of the highest levels since World War II.1

Young people will be stuck paying for government debt they had no part in creating. And they’ll have to do it with less discretionary income than ever before because of record high levels of student loan debt. 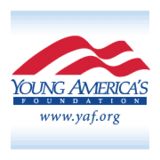 Young people today face a three-pronged attack on their financial security—educational debt from their past, unemployment in the present, an...

Young people today face a three-pronged attack on their financial security—educational debt from their past, unemployment in the present, an...