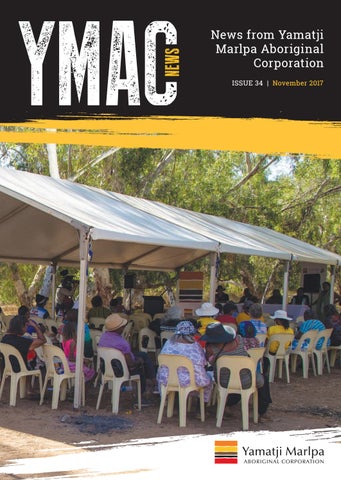 Message from the Co-Chairs

Welcome to Issue 34 of YMAC News. Launch of Pilbara Solar

It has been a very busy few months at YMAC. We have achieved determinations on the Yinhawangka, Budina and Wajarri Yamatji claims; and settled an Indigenous Land Use

Agreement between the Kariyarra People and the State of

The Annual on-Country Bush Meeting at Yule River was

an outstanding success, with a historic resolution to form an independent representative group for the purpose of consultation with government.

YMAC has also formed a partnership with Pilbara Solar, offering an exciting opportunity for Aboriginal business

development in the energy sector. We hope that you enjoy reading about the positive outcomes that YMAC is achieving for our stakeholders.

This is the last YMAC News for 2017. From all of us at YMAC, we wish you a Merry Christmas and a Happy New Year. Warning: Aboriginal People are warned that this publication may contain images of deceased people.

Nyiyaparli people On 4 and 5 July 2017, a special Nyiyaparli Working Group was held at the Fortescue Metals Group (FMG) Christmas Creek mine to mark the registration of the FMG Indigenous Land Use Agreement (ILUA) and to celebrate NAIDOC Week. The FMG ILUA was signed on 15 December 2016 and effects changes to the existing land access agreement, including increased royalties and benefits management flexibility, stronger protection for the Fortescue Marsh and provisions to increase the economic participation of the Nyiyaparli People in FMGâ&amp;#x20AC;&amp;#x2122;s operations through training, employment and contracting opportunities. The Nyiyaparli Working Group visited the Fortescue Marsh and Kamtama camp facilities, met with key FMG team members, and were given a tour of the Christmas Creek operations. They also attended a dinner as part of NAIDOC Week celebrations.

After 20 years of negotiations with the State

The Determination Area covers the townsite

Government of WA, the Yinhawangka people

of Paraburdoo, the Aboriginal communities at

celebrated the Determination of their Native Title

The Area is home to many sacred sites including

determination which included the recognition

of exclusive native title rights and interests in

unallocated Crown land. This is a great outcome

“It is a proud day for us as Yinhawangka people.

After all of our hard work we are finally recognised

and the Yinhawangka People should be very proud.”

as the owners of this land. We would like to thank

the Yinhawangka people enjoy both spiritual and

The official signing of an Indigenous Land Use

Agreement (ILUA) between the Kariyarra People

negotiation has been a long, challenging journey

and the State of Western Australia (WA) was held

that has changed the way we see ourselves and

empowered us to create a better future for our

Since 2011, the Kariyarra People have been

engaged in negotiations with the State of WA

Key benefits of the ILUA include houses in South

regarding compensation for the expansion of the

Port Hedland Port and a residential area in South

reserves for the use and benefit of Aboriginal

Hedland, acts which occurred within the Kariyarra

people, both town based and further away in the

The State of WA approved the Kariyarra-State

to take a leadership role in their communities to

achieve the outcomes they want for themselves.”

to end intergenerational poverty and help their

Day 2 was open to the Public. A presentation from

at the Yule River meeting place was held on

and Minister for Aboriginal Affairs) was warmly

received by all. Presentations were also made by

and government officials gathered over two

days to discuss a range of concerns raised by the

Disability Services, and Deputy Leader of the

Government in the Legislative Council), Senator

attended the event that ever before.

for Mining and Pastoral Region).

Day 1 was for Traditional Owners and included

Three resolutions were passed at the Yule River

The evening was celebrated with traditional dance

performances from the Kariyarra, followed by

Nyangumarta, and Njamal with a stunning Martu

give advice to the government on behalf of

performance to finish. The dancing occurred

under a clear, star filled night, in the light of camp fires, accompanied by the singing of elder men

in The dancers were organised by YMAC Pilbara

(mental, renal and men’s health), support of a

treaty with the State Government, improved

performance in the past four years of the Yule

opposition to the Cashless Welfare Card and

Many thanks also go to YMAC Director and CoChair (Yamatji), Peter Windie, for providing the delicious kangaroo that was served for lunch.

The Marlpa People made a strong delivery at the meeting calling on the WA State and Federal Government to fully commit to a process towards Voice, Treaty and Truth.

Watch a video of highlights from the 2017 Yule River event by using the link: http://ymac.org.au/type/video/

ABOVE: Community members voting on a resolution at the 2017 Annual on-Country Bush Meeting.

ABOVE: Community members enjoying the evening entertainment at the conclusion of Day 1.

ABOVE: Mr Thomas Mayor (far left) with the Yinhawankga dancers, and the canvas with signatures supporting the Statement from the Heart. RIGHT: YMAC team member cooking a barbeque lunch for the meeting attendees.

Pilbara Solar The Pilbara is widely recognized as having the best

solar resources in the world.

enact the recommendations of the prefeasibility

highlighted the Pilbara as suitable for very large-

includes equity ownership by the Traditional

Owners of the Pilbara and aims to grow Aboriginal

The prefeasibility study, “ Evaluating the potential

to export Pilbara solar resources to the proposed

communities and leadership opportunities for a new industry in Northern Australia.

For decades, YMAC has attempted to bring equity

opportunities for Aboriginal people into mining

in August this year by Hon. Alannah MacTiernan,

projects, however the mining companies were not

Minister for Regional Development. This study

receptive to the idea. However, the renewables

industry is embracing the model of true Aboriginal

resources to southeast Asia, where electricity

partnership. YMAC has a seat on the Board of

Pilbara Solar, to provide opportunities to our stakeholders in the Pilbara.

The unique selling points of the Pilbara Solar

business model have also caught the attention of

the Department of Prime Minister and Cabinet.

term is to scale up the solar industry in the Pilbara,

Pilbara Solar will be presenting at the Northern

building up the supply chain and expertise to

in Cairns in late November 2017 and the company

at scale, adapted to local Pilbara conditions. Its

has also been invited to attend the Indonesia

vision in the long term is to export Australian solar

interconnector, and/or hydrogen to Indonesia.

ABOVE: the Budina applicants celebrate their determination with family, neighbours, YMAC staff, the Federal Court team, and representatives from the State government. The Federal Court hearing was held at the Lyndon Station Homestead. The Budina community celebrated the legal

recognition of their land and culture at an on-

efforts made by everyone who travelled to Lyndon

The Budina determination area is about 4,096

Station to witness the historic event.

square kilometres in size. It is located about 300

“This is an important outcome for the Budina

people and I’m so glad to see so many people

of Carnarvon. The area occurs within the Shire of

could make it out here to celebrate with us.”

Ashburton, Shire of Carnarvon and Shire of Upper

YMAC CEO Simon Hawkins said “ This is a great

outcome for a beautiful group of people.”

at Budara on Wooleen Station On Thursday 19 October 2017, the Wajarri Yamatji

â&amp;#x20AC;&amp;#x153;It recognises our connection to our Country

community celebrated the legal recognition of

(barna) that has existed since long before European

their land and culture at an on-Country Federal

colonisation. We have always known where we

come from, but this determination means that

The consent determination covers the majority of the Wajarri Yamatji claim area, 68,743 square

our connection to our barna is recognised by Australian law.â&amp;#x20AC;? the Committee said.

kilometres of the total 97,676 square kilometres

It was a day of excitement and emotion, as many

elders recalled stories of their childhood spent on

Country and how proud they were to have finally

Gascoyne, Cue and Yalgoo, as well as 56 pastoral

Many families have been involved in the journey

to this native title recognition which started more

Government looked forward to building an

enduring relationship with the Wajarri Yamatji

people and welcomed their engagement to discuss opportunities for economic development.

a crowd of over 300 people gathered at Budara on Wooleen Station to ABOVE:ABOVE: image caption witness the federal court consent determination of the Wajarri Yamatji Part A.

The Department of Mines, Industry Regulation

The workshops allowed for a shift in conversation

and Safety Awards for Excellence were held on

Billiton Iron Ore, were selected as finalists in the

to a focus on identifying environmental issues

The collaboration between YMAC and BHP

The partnership between YMAC and BHP Billiton

has allowed for more meaningful and broader

engagement program over 18 months with six

Traditional Owner groups on the companyâ&amp;#x20AC;&amp;#x2122;s

working towards longer-term stewardship and

committee held a public hearing on the Social Services

Debit Card) Bill 2017 in Kalgoorlie on Thursday 12 October 2017. The committee received 58 submissions on the proposed Bill from across Australia. The

committee members in attendance were: •

The Bill proposes to amend the Social Security (Administration) Act 1999 to remove certain restrictions on the cashless debit card trial and thereby allow the extension of trial arrangements in current sites and to further sites. The implication is that the system could be implemented anywhere at anytime, without justification or evidence to support the merits of the system.

YMAC presented a witness statement at the Senate Committee hearing via teleconference. The key messages delivered on behalf of YMAC members were: •

there is a lack of robust data to support the claims

represented a cross section of the Australian

that the scheme has resulted in a transformation

of the trial communities

The full transcript of the Kalgoorlie public hearing is available for download from: https://www.aph.gov.au/Parliamentary_Business/ Committees/Senate/Community_Affairs/ CashlessDebitCard/Public_Hearings

Warriyangka Tharrkari Jiwarli (TMWTJ) community authorised the Yangibana Project Area Agreement with Hastings Technology Metals in Carnarvon. The TMWTJ Negotiation Team first met with Hastings in March 2017, negotiations progressed quickly thanks to the hard work of all the parties involved. The Yangibana Project is a rare earth minerals operation 270kms north-east of Carnarvon, and the successful completion of the Agreement marks the first such Agreement entered into by the new combined claim. The authorisation of the Agreement will bring both direct financial benefits and a variety of employment and contracting opportunities to the TMWTJ People. Executive chairman of the Hastings board, Charles Lew, thanked the TMWTJ People for their hard work in negotiating the Agreement with the presentation of a pewter plaque, made from tin mined near his childhood home in Malaysia. TOP LEFT: Mr Charles Lew (left), Executive Chairman of the Board of Hastings Technology Metals presenting Mr Herbert Eagle (right) with a Royal Selangor plate. BOTTOM LEFT: The Royal Selangor plate.

The YMAC annual report for the year 1 July 2016 to 30 June 2017 provides a summary of the key achievements and acivities completed during the reporting year. In particular, significant progress has been made on several native title claims, future act agreements and advocacy projects such as ranger programs. The report was approved by the Board of Directors on 6 October 2017 and a copy was posted to all YMAC members the following week. The report is also available for viewing and download from the YMAC website: www.ymac.org.au/annual-reports Please

Seasonâ&amp;#x20AC;&amp;#x2122;s Greetings As 2017 draws to a close, the Directors, Executive Management Team and Staff at YMAC extend their thanks to our members for your ongoing support. We wish you and your family a very Merry Christmas and a Happy New Year.

Holiday Shutdown YMAC offices will be closed for the Christmas and New Year period from Friday 22 December 2017 and reopen on Monday 8 January 2018. 15

Contact us: Send your questions, ideas, letters and photos to editor@ymac.org.au

In this issue, we celebrate three native title determinations, a land use agreement, launch a partnership in renewable energy and achieve a historic resoluton at the Annual on-Country Bush Meeting.