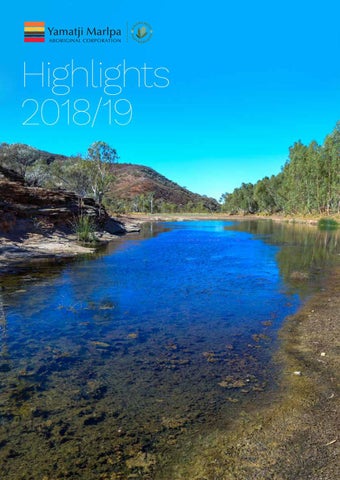 On behalf of the Board of Directors we are delighted to share with you some of Yamatji Marlpa Aboriginal Corporation’s (YMAC) highlights from the 2018/19 financial year, and selected achievements to September 2019.

YMAC is run by an Aboriginal Board of Directors to protect Yamatji and Marlpa Country. This is achieved by providing a range of professional services to our Traditional Owners clients, including:

It is good to reflect on the hard work being carried out for YMAC’s members, native title claim groups and the Aboriginal Corporations for whom we provide services. The Board is proud of all the effort and accomplishments of the YMAC team. Their dedication contributes to Yamatji and Marlpa peoples having greater access and control over their land as well as creating a legacy for future generations. We are particularly proud to have reached our 25th Year Anniversary and it has been heartening to be able to celebrate this amazing milestone in the second half of this reporting period. Thank you to our members, and to our government and community stakeholders for your support in this very successful year.

• Assisted with the certification and registration of ten (10) Indigenous Land Use Agreements.

Alternative settlement agreements Progression continued to be made on the Yamatji Nation Southern Regional Agreement (YNSRA), with the State Government and the Traditional Owner Negotiating Team (TONT) reaching in-principle agreement for a comprehensive native title settlement over 48,000 square kilometres of land in the region, including Geraldton. YMAC has been proud to support the TONT to achieve the best possible outcome for Traditional owners in the region.

YMAC Governance • Finalist in the 2018 Reconciliation Australia National Indigenous Governance Awards. • 16th consecutive clean audit. • Successful completion of a review by the Office of the Registrar of Indigenous Corporations (ORIC). • Improvement in staff conditions and strong staff retention rate. • Increased funding from the Commonwealth through positive variations and achievement of variations and achievement of milestones.

• Nyangumarta Ranger Program: increase in Aboriginal employment and secured grants for Aboriginal people. • Supported implementation of the Malgana Aboriginal Ranger program based in Denham, partnering with the Malgana Aboriginal Corporation. • Jointly secured funding with the Meenangu Wajarri Aboriginal Corporation to create an Aboriginal Ranger Program focusing on the protection of cultural assets and traditional knowledge in the Burringurrah (Mt Augustus) complex. • Promoted the Conservation Estate following the WA Premiers announcement of ‘Plans for Our Parks’ initiative, which will expand the State’s conservation estate to create five million hectares of new parks over the next five years. Seventy percent of the proposed parks and reserves occur within YMAC’s representative area.

Submissions and Advocacy Prepared submissions on policy and advocacy issues, including: • State Government proposal for a new independent office for An Office for Advocacy and Accountability in Aboriginal Affairs in Western Australia • Proposed amendments to proposed Aboriginal Heritage Act 1972 (AHA) Consultation Phase Two • Joint Standing Committee on Northern Australia Inquiry into the Opportunities and Challenges of the Engagement of Traditional Owners in the Economic Development of Northern Australia (also contributed to National Native Title Council submission) • Joint Select Committee on the Constitutional Recognition of Aboriginal and Torres Strait Islander Peoples • National Native Title Tribunal Review of Expedited Procedure in Western Australia • Response to the Inquiry into the Social Security (Administration) Amendment (Income Management and Cashless Welfare) Bill 2019 • The National Indigenous Land and Sea Strategy • Draft Position Statement on Protecting the Value of the Land to the Culture and Heritage of Aboriginal Persons to the Conservation and Parks Commission.

Community • Participated in various NAIDOC Celebrations in both Yamatji and Marlpa regions 2-9 July 2018 and in July and September 2019.

YMAC is the Native Title Representative Body for Traditional Owners in the Pilbara, Mid West, Murchison, and Gascoyne regions of Western Australia.