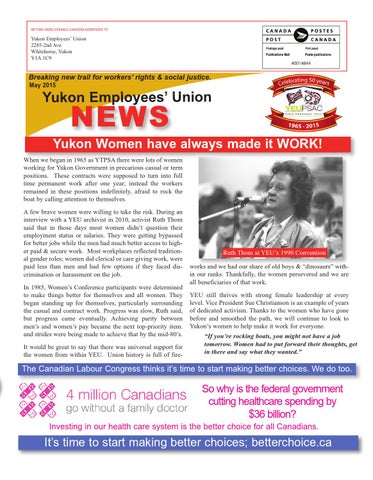 Yukon Women have always made it WORK!

When we began in 1965 as YTPSA there were lots of women working for Yukon Government in precarious casual or term positions. These contracts were supposed to turn into full time permanent work after one year; instead the workers remained in these positions indefinitely, afraid to rock the boat by calling attention to themselves.

A few brave women were willing to take the risk. During an interview with a YEU archivist in 2010, activist Ruth Thom said that in those days most women didn’t question their employment status or salaries. They were getting bypassed for better jobs while the men had much better access to higher paid &amp; secure work. Most workplaces reflected traditional gender roles; women did clerical or care giving work, were paid less than men and had few options if they faced discrimination or harassment on the job.

In 1985, Women’s Conference participants were determined to make things better for themselves and all women. They began standing up for themselves, particularly surrounding the casual and contract work. Progress was slow, Ruth said, but progress came eventually. Achieving parity between men’s and women’s pay became the next top-priority item. and strides were being made to achieve that by the mid-80’s.

It would be great to say that there was universal support for the women from within YEU. Union history is full of fire-

works and we had our share of old boys &amp; “dinosaurs” within our ranks. Thankfully, the women persevered and we are all beneficiaries of that work.

YEU still thrives with strong female leadership at every level. Vice President Sue Christianson is an example of years of dedicated activism. Thanks to the women who have gone before and smoothed the path, we will continue to look to Yukon’s women to help make it work for everyone.

“If you’re rocking boats, you might not have a job tomorrow. Women had to put forward their thoughts, get in there and say what they wanted.”

The Canadian Labour Congress thinks it’s time to start making better choices. We do too.

So why is the federal government cutting healthcare spending by $36 billion?

Investing in our health care system is the better choice for all Canadians.

Moving toward Equality in Yukon

Whereas PSAC believes in non-discrimination for all equity groups covered under the Canadian Human Rights Act; and

Whereas PSAC believes in non-discrimination on the grounds of gender identity because it is included in the PSAC constitution; and

Whereas PSAC is a leader in creating an inclusive work environment for our members; and

Whereas PSAC takes a leadership role in improving the working conditions of all workers (union and non-union) when it comes to discrimination, non-discrimination and equity:

THAT this House urges the Yukon government to advance equal rights for transsexual, transgender and gender-variant people by:

(1) introducing amendments to explicitly include “gender identity” and “gender expression” under section 7 of the Yukon Human Rights Act as a prohibited ground for discrimination the next time the act is reviewed;

The motion received the unanimous support of all MLA’s in a recorded vote.

BE IT RESOLVED THAT PSAC lobby the federal Canadian government to add gender identity and gender expression to the Canadian Human Rights Act. RATIONALE:

Trans* people are often victims of discrimination, harassment and even violence. They are often denied employment, housing, access to health care, and other basic rights.

PSAC defends trans* rights and has successfully negotiated language in collective agreements. The PSAC has also long supported the inclusion of gender identity in the Canadian Human Rights Act and has lobbied for legislative reform. In 2014, the PSAC presented a brief on this issue to the Senate Standing Committee on Human Rights. However, opposition to inclusion of gender identity and gender expression in human rights legislation continues. More focused resources are required to increase the pressure on all political parties in order to achieve success. The above is one of several resolutions passed at PSAC National Triennial Convention 2015. All resolutions presented to the delegation with respect to gender identity and gender expression were passed with unanimous support.

Trans* people aren&#39;t misleading others or unsure about their gender. They&#39;re certain about their gender identity and firmly reject the gender designated to them at birth. Have questions? Need Information? Wonder how to be an ally? Visit www.pflagcanada.ca or call PSAC &amp; learn about the Pride Committee YEU NEWS

I have been to a lot of Union Conventions in my years as an activist. I’ve NEVER attended a convention as electric as the 2015 PSAC National Triennial Convention. What a week! It has been called the most progressive convention in PSAC’s history and I would agree. Delegates were challenged to put their money where their mouth is in more ways than one.

YEU sent 12 delegates, selected at our Triennial Convention last October. These delegates worked hard every day, attending breakfast caucus meetings, evening committee meetings and equity caucus sessions on their lunch breaks. Many were first time delegates and several were young workers. They rose to the challenge and shone. This was one of the very strongest delegations I have had the pleasure of working with. Bravo.

Some groundbreaking resolutions were passed, including a few that came from the Yukon. Following a 2013 Resolution from the Yukon Racially Visible Committee to the National Equity Conference, Delegates approved holding a conference of racially visible members every three years in each PSAC region.

The conferences will be an opportunity for racially visible members to network, mobilize and strategize to address their specific needs and to foster leadership in their union and workplaces. Derek said “I&#39;m humbled by the strong support by the delegates that allowed this resolution to pass, and am so

encouraged that the PSAC stands by its members and walks the talk on equity and inclusivity in the union.” He summed it up.

PSAC’s young workers brought a resolution to the floor that reflects the realities faced by the next generation of workers. Young workers leave school with massive student debt, face staffing freezes or precarious work. We are going to be well served by these young leaders as they take us into the future.

It’s been a busy time here, with ratification votes for the Hospital, AGM’s and negotiations happening all over the place. Our Community Vice-President Tony Thomas will be visiting your community soon and I will be heading up the highway next month to Mayo, Dawson, Burwash, Beaver Creek and all points between with National Vice President Chris Aylward. We hope to see you at the Bbq in Dawson City on Thursday June 25 if you’re in town.

Happy Retirement, Maureen Stephens - thanks for years of commitment and STYLE! Maureen Stephens was raised in a strong union family. Her dad was an advocate for workers rights’ as president of his trade union.

At 19, she worked in a low paying non-unionized Whitehorse business. She moved into management but was not satisfied with working conditions for all employees. She organized her fellow workers under the Teamsters with 100% sign up.

In the end she lost her job; she would not cross the picket line, but joined the workers instead.

This commitment to standing up for others whatever the cost has characterized Maureen’s 25 years at Yukon College. In the 90’s Maureen was invited to be a Shop Steward, later becoming Chief Shop Steward. Two years later she replaced Doug Graham as YCEU President. She has been a member of negotiating teams and countless YEU NEWS May 2015

committees. Maureen works with the Yukon Federation of Labor on women’s issues, and has co-chaired the PSAC Regional Women’s Committee. She currently sits on the WCB Appeal Tribunal. Maureen was and will stay active in the NDP. She helped organize elections and was the federal counselor, Yukon designate, under Jack Layton.

I met Maureen when she served on Local Y011’s Executive Board as VP-Support Staff. She often explained articles in our collective agreement and the history behind them to members. Her expertise and historical knowledge will be missed.

We want to thank Maureen for her energy and enthusiasm. Her retirement leads to the next chapter... we are pretty sure wherever she goes it will be in a fabulous pair of Fluevogs! Birgit Martens, President Local Y011

I was elected to the Hospital Workers’ bargaining team last year, which meant I had to learn a lot in a hurry. To help me better understand the role I might play, I was chosen to attend the CLC Winter School at Harrison Hot Springs. Through sharing experiences and discussing the issues young workers face every day, I realized how proud I am to be part of a labour movement that fights for worker’s rights.

Shortly after Yukon’s Hospital workers voted to support a strike mandate, I assumed the position of president of this very diverse local. I live in Dawson but most of the membership is in Whitehorse. The distance means we have some challenges to overcome but we hope to create a good path for future Local executives and strengthen the Local inside and outside Whitehorse.

the PSAC National Convention in Quebec City in May. Wow Robyn Benson is an inspiration and I had a chance to hear both Chris Aylward and Hassan Yussuff speak again. Thanks to them I have a few new goals! I wish all members had the same opportunity - the passion of the leadership and their fierce determination to stand up for our rights is amazing. This year we have the chance to demonstrate true democracy in Canada by casting our vote and electing a new government. Young workers, protect your future; be active, VOTE! Participate in our union if you want it to stay strong through your career; we are the leaders of the FUTURE! Jamie Webber Local Y025 President, YEU Youth Director

The experience of strike votes and a strike mandate was intense. The learning curve was straight up, and I had to really practice my leadership skills and my diplomacy.

It was exciting and scary at the same time. Nobody wants to strike but there’s a powerful feeling of solidarity when everyone stands shoulder to shoulder. I was proud to be part of it. At last fall’s YEU Convention I was selected as a delegate to 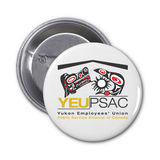