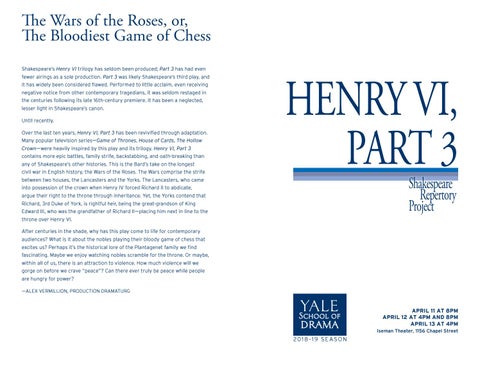 The Wars of the Roses, or, The Bloodiest Game of Chess Shakespeare’s Henry VI trilogy has seldom been produced; Part 3 has had even fewer airings as a sole production. Part 3 was likely Shakespeare’s third play, and it has widely been considered flawed. Performed to little acclaim, even receiving negative notice from other contemporary tragedians, it was seldom restaged in the centuries following its late 16th-century premiere. It has been a neglected, lesser light in Shakespeare’s canon. Until recently. Over the last ten years, Henry VI, Part 3 has been revivified through adaptation. Many popular television series—Game of Thrones, House of Cards, The Hollow Crown—were heavily inspired by this play and its trilogy. Henry VI, Part 3 contains more epic battles, family strife, backstabbing, and oath-breaking than any of Shakespeare’s other histories. This is the Bard’s take on the longest civil war in English history, the Wars of the Roses. The Wars comprise the strife between two houses, the Lancasters and the Yorks. The Lancasters, who came

into possession of the crown when Henry IV forced Richard II to abdicate, argue their right to the throne through inheritance. Yet, the Yorks contend that Richard, 3rd Duke of York, is rightful heir, being the great-grandson of King Edward III, who was the grandfather of Richard II—placing him next in line to the throne over Henry VI. After centuries in the shade, why has this play come to life for contemporary audiences? What is it about the nobles playing their bloody game of chess that excites us? Perhaps it’s the historical lore of the Plantagenet family we find fascinating. Maybe we enjoy watching nobles scramble for the throne. Or maybe, within all of us, there is an attraction to violence. How much violence will we gorge on before we crave “peace”? Can there ever truly be peace while people are hungry for power? —ALEX VERMILLION, PRODUCTION DRAMATURG