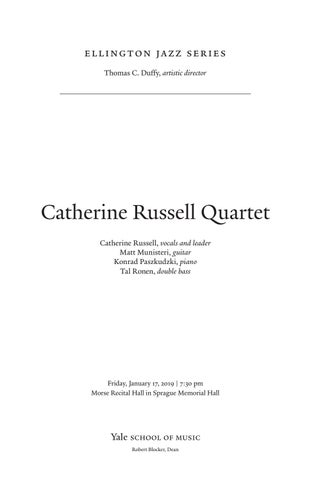 Artist Profiles Catherine Russell, vocals and leader Grammy Award-winning vocalist Catherine Russell is a native New Yorker, born into musical royalty. Her father, the late Luis Russell, was a legendary pianist/composer/ bandleader, and Louis Armstrong’s longtime musical director. Her mother, Carline Ray, was a pioneering vocalist/guitarist/ bassist who performed with International Sweethearts of Rhythm, Mary Lou Williams, and Sy Oliver. A graduate of American Academy of Dramatic Arts, Ms. Russell has toured the world, performing and recording with David Bowie, Cyndi Lauper, Paul Simon, Steely Dan, Jackson Browne, Michael Feinstein, The Holmes Brothers, Wynton Marsalis, and Rosanne Cash, among others, appearing on over 200 albums. Since the 2006 release of her debut album, Cat, on Harmonia Mundi’s World Village label, six acclaimed and chart topping albums have followed, including Strictly Romancin’, awarded Prix du Jazz Vocal 2012 (Vocal Album of The Year) by the Jazz Academy in France, and Bring It Back in 2014. Catherine Russell was a featured artist on a Grammy Award-winning soundtrack album for the HBO series Boardwalk Empire. Her 6th album, Harlem On My Mind, was released in September 2016 and received a Grammy Nomination for Best Jazz Vocal Album. Catherine has appeared on PBS and on Fresh Air with Terry Gross on NPR. Will Friedwald writing in The Wall Street Journal, calls Catherine Russell “one of the outstanding singers of our time.” Catherine’s 7th album as a leader, Alone Together, was released in March 2019 on

Dot Time Records, and held the #1 position on the JazzWeek 2019 Year End Chart for national radio play, while receiving her second Grammy Nomination for Best Jazz Vocal Album. » catherinerussell.net Matt Munisteri, guitar Matt Munisteri is a guitarist, singer, and songwriter based in New York City. As one of a relatively small number of authoritative acoustic jazz guitarists playing swing and early jazz, Matt has recorded extensively and is a first-call guitarist when a “period” sound is sought for CDs, film scores, and commercials. He has collaborated with many colleagues in his field on concerts and recordings, including Vince Giordano, Mark O’Connor, Andy Stein, Frank Vignola, Bucky Pizzarelli, the Lincoln Center Jazz Orchestra, Catherine Russell, Julian Lage, Geoff Muldaur, Loudon Wainwright, Howard Alden, Tim Kliphuis, and Matt Glaser. As an educator and clinician Matt has taught at the Berklee College of Music, the Augusta Heritage Center, the Ashokan Center, and Centrum. Matt’s own recordings include the acclaimed Still Runnin’ Round in the Wilderness, Love Story, It’s Been Swell, and Hell Among the Hedgehogs, a smoking hot twin-guitar CD with the Hot Club of Cowtown’s Whit Smith. » mattmunisteri.com Konrad Paszkudzki, piano Konrad Paszkudzki is an Australian-born, Polish-raised, and New York-residing jazz pianist with a remarkable status on American Airlines. In the last three years, he has

Ellington Jazz Series recorded seven albums with the Konrad Paszkudzki Trio — the first ever Composers Songbook Series for Venus Records in Japan. As the pianist in the John Pizzarelli Trio for the last five years, Konrad has performed over 600 concerts in venues across Europe, Canada, Brazil, Asia, and all across the U.S. Aside from touring and recording, Konrad also commenced his role as Artistic Director of Jazz at the Ballroom in 2017, a not-forprofit organization committed to delivering the highest caliber of swinging American jazz across the West Coast. » konradjazz.com

The Bernie Williams Collective The former New York Yankees center fielder is a musician “whose talent as a guitarist is evident” (The Washington Post) and whose album Moving Forward was nominated for a Latin Grammy Award. Fridays at 7:30 p.m. Morse Recital Hall Tickets start at $22, students $10

Tal Ronen, double bass The Tel Aviv-born composer, songwriter, and bassist Tal Ronen is a frequent presence on the world stage, especially in New York and Israel. In his mid-teens, the great jazz educator Arnie Lawrence took Ronen under his wing as a protegé, recognizing talent and promise in the young artist. A graduate of the prestigious art high school Thelma Yellin in Israel, and veteran of the Israeli Army as a bassist in the Army Jazz ensemble (earning an outstanding musician status), he is a two-time scholarship honoree of the American-Israeli Cultural Foundation. He has studied with a variety of worldrenowned musicians such as John Pattituci, Michael Klinghofer, and Teddy Kling. He has been described as “swinging and lyrical” (Michael Steinman, Jazz Lives) and “easily one of the best bassists of his generation” (Daniel Healy, Arts America Blog). Ronen is a main collaborator and songwriter for singer Dida Pelled.

Brentano String Quartet Oneppo Chamber Music Series A performance of Bruce Adolphe’s Coiled and the work on which it’s based, Beethoven’s “Serioso” Quartet, along with music by Bach, Mendelssohn, and Shostakovich. 7:30 pm | Morse Recital Hall Tickets start at $28, students $13

If you do not intend to save your program, please recycle it in the baskets at the exit doors. 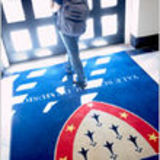