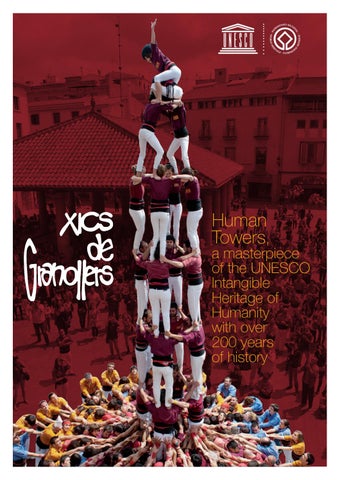 “Els castells”, human towers, are one of the most emblematic expressions of traditional Catalan culture and have become a true national symbol for Catalonia. With more than 200 years of history, human towers are on the rise, and stronger than ever. In 2010, castells were declared part of the World’s Intangible Cultural Heritage by UNESCO, which has made them into one of the greatest ambassadors of our country. They are admired and recognised by international press as one of the most spectacular cultural practices in the entire world. Castells promote the values that they are built with: strength, balance, courage and wisdom. A castell is born from the earth and rises into the sky, fed by the strength of the people. The “colles” are the groups that build castells. They have the aforementioned values at their core, and they are role models when it comes to team work, participation and integration. Because of this, they are always needed to channel these values. The tradition began in a small area of Catalonia (Alt Camp...) but in the last 50 years it has grown substantially, on both sides of our country’s borders. And it was in the eighties that the human towers arrived in Granollers.

Granollers is located on the Valles plain, in Cataloniaâ&amp;#x20AC;&amp;#x2122;s costal depression, approximately 148 meters above sea level. This privileged geographical location has made Granollers the capital of the Valles Oriental which is known for its substantial economic weight. With close to 60.000 inhabitants, Granollers has always been recognised for its commercial activity. Their traditional market was first mentioned in the year 1040. The life and movement of the city is mirrored in the many sports and cultural activities and organizations found here, of which Xics a ni de Granollers plays an o l Granollers important role. ta

Rooted in the land and open to the world Xics de Granollers was founded in 1991 and since its first day, it has been a group open to the entire county. Amongst the hundreds of castellers (human tower builders) that make up the Xics family, you can find people from all different backgrounds and faiths. We are an 8 storey group but dream of building towers of 9 levels in the near future. Like most other groups, we are currently living a revival of castells and these past few years have been the best in our history, both technically and socially. In the last three years, our group has been invited to perform in the Karneval der Kulturen of Berlin, for the Human Towers for Democracy movement; in the Aplec International of Torino, and the Markina and Amorebieta festivals (Basque Country).

The best asset of the Xics de Granollers is surely the people. Human towers allow us to work on important aspects in the development of personal and community values, such as integrity, solidarity, tolerance, and the virtue of sacrifice and striving for the common good. As a group, our activities are very varied, and they include: marathons, excursions, cycling, football, music, gastronomy, festivals, childrenâ&amp;#x20AC;&amp;#x2122;s activities, solidarity events, etc. But above all, we build human towers. With around 30 performances during the course of the year and with 3 rehearsal sessions every week, we are able to achieve our goals. Additionally, the canalla, the children in the group, being such a valued and important part of what we do, have their own specialised rehearsal sessions. And all of this unfolds in our own human tower factory, La Troca.

Our values are of utmost importance

The meeting place for the Xics de Granollers lies in La Troca, together with around a dozen different organizations that promote Granollers’ traditional culture and folklore. The Aplegador is where we rehearse; a hall designed and built specifically for the needs of a human tower group. La Troca belongs to “the Roca Umbert Factory of the Arts”, a project started by the city council. It has transformed an old textile factory of the Roca Umbert, a 20.000 m2 facility in the city centre. It has almost become a cultural landmark, being used for the production, formation and as a place to showcase all kinds of artistic creations. Currently it has 10 halls: the Library, the Technology and University Centre, the musical centre Bucs, a bar, the Arts Zone, several workshops for production, the Audio-visual Centre, the multiuse Area of Dents de Serra, the Concert hall and La Troca.

The Human towers performances From popular tradition to universal spectacle

We in the Xics de Granollers enjoy building human towers and weâ&amp;#x20AC;&amp;#x2122;re working constantly to improve each year in all aspects, from our social activities to our human towers, so we can be at our best at every performance. 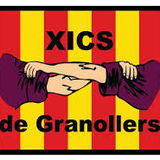