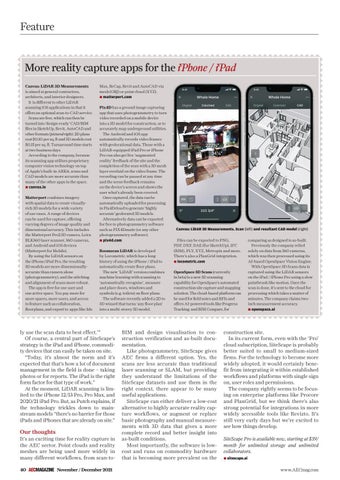 More reality capture apps for the iPhone / iPad Canvas: LiDAR 3D Measurements is aimed at general contractors, architects, and interior designers. It is different to other LiDAR scanning iOS applications in that it offers an optional scan-to-CAD service. Scans are free, which can then be turned into ‘design-ready’ CAD/BIM files in SketchUp, Revit, AutoCAD and other formats (pictured right). 2D plans cost $0.10 per sq. ft and 3D models cost $0.15 per sq. ft. Turnaround time starts at two business days According to the company, because its scanning app utilises proprietary computer vision technology on top of Apple’s built-in ARKit, scans and CAD models are more accurate than many of the other apps in the space. ■ canvas.io Matterport combines imagery with spatial data to create visuallyrich 3D models for a wide variety of use cases. A range of devices can be used for capture, offering varying degrees of image quality and dimensional accuracy. This includes the Matterport Pro2 3D camera, Leica BLK360 laser scanner, 360 cameras, and Android and iOS devices (Matterport for Mobile). By using the LiDAR sensors on the iPhone/iPad Pro, the resulting 3D models are more dimensionallyaccurate than camera alone (photogrammetry), and the stitching and alignment of scans more robust. The app is free for one user and one active space. You pay more for more spaces, more users, and access to feature such as collaboration, floorplans, and export to apps like 3ds

Max, ReCap, Revit and AutoCAD via mesh (OBJ) or point cloud (XYZ). ■ matterport.com Pix4D has a ground image capturing app that uses photogrammetry to turn video recorded on a mobile device into a 3D model for construction, or to accurately map underground utilities. The Android and iOS app automatically records video frames with geolocational data. Those with a LiDAR-equipped iPad Pro or iPhone Pro can also get live ‘augmented reality’ feedback of the site and the completion of the scan with a 3D mesh layer overlaid on the video frame. The recording can be paused at any time and the scene feedback remains on the device’s screen and shows the user what’s already been covered. Once captured, the data can be automatically uploaded for processing in Pix4Dcloud to generate ‘highly accurate’ geolocated 3D models. Alternatively data can be exported for free to photogrammetry software such as PIX4Dmatic (or any other photogrammetry software). ■ pix4d.com Roomscan LiDAR is developed by Locometric, which has a long history of using the iPhone / iPad to automatically create floor plans. The new ‘LiDAR’ version combines machine learning with scanning to ‘automatically recognise’, measure and place doors, windows and symbols (e.g. toilets) on floor plans. The software recently added a 2D to 3D wizard that turns ‘any floor plan’ into a multi-storey 3D model.

ly use the scan data to best effect.’” Of course, a central part of SiteScape’s strategy is the iPad and iPhone, commodity devices that can easily be taken on site. “Today, it’s almost the norm and it’s expected that that’s how a lot of document management in the field is done – taking photos or for reports. The iPad is the right form factor for that type of work.” At the moment, LiDAR scanning is limited to the iPhone 12/13 Pro, Pro Max, and 2020/21 iPad Pro. But, as Putch explains, if the technology trickles down to mainstream models “there’s no barrier for those iPads and iPhones that are already on site.”

Our thoughts It’s an exciting time for reality capture in the AEC sector. Point clouds and reality meshes are being used more widely in many different workflows, from scan-to40

BIM and design visualisation to construction verification and as-built documentation. Like photogrammetry, SiteScape gives AEC firms a different option. Yes, the scans are less accurate than traditional laser scanning or SLAM, but providing they understand the limitations of the SiteScape datasets and use them in the right context, there appear to be many useful applications. SiteScape can either deliver a low-cost alternative to highly accurate reality capture workflows, or augment or replace basic photography and manual measurements with 3D data that gives a more complete record and better insight into as-built conditions. Most importantly, the software is lowcost and runs on commodity hardware that is becoming more prevalent on the

comparing as designed to as-built. Previously the company relied solely on data from 360 cameras, which was then processed using its AI-based OpenSpace Vision Engine. With OpenSpace 3D Scans data is captured using the LiDAR sensors on the iPad / iPhone Pro using a slow paintbrush like motion. Once the scan is done, it’s sent to the cloud for processing which takes a matter of minutes. The company claims twoinch measurement accuracy. ■ openspace.ai

construction site. In its current form, even with the ‘Pro’ cloud subscription, SiteScape is probably better suited to small to medium-sized firms. For the technology to become more widely adopted, it would certainly benefit from integrating it within established workflows and platforms with single sign on, user roles and permissions. The company rightly seems to be focusing on enterprise platforms like Procore and PlanGrid, but we think there’s also strong potential for integrations in more widely accessible tools like Revizto. It’s still very early days but we’re excited to see how things develop. SiteScape Pro is available now, starting at $39/ month for unlimited storage and unlimited collaborators. ■ sitescape.ai 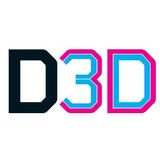 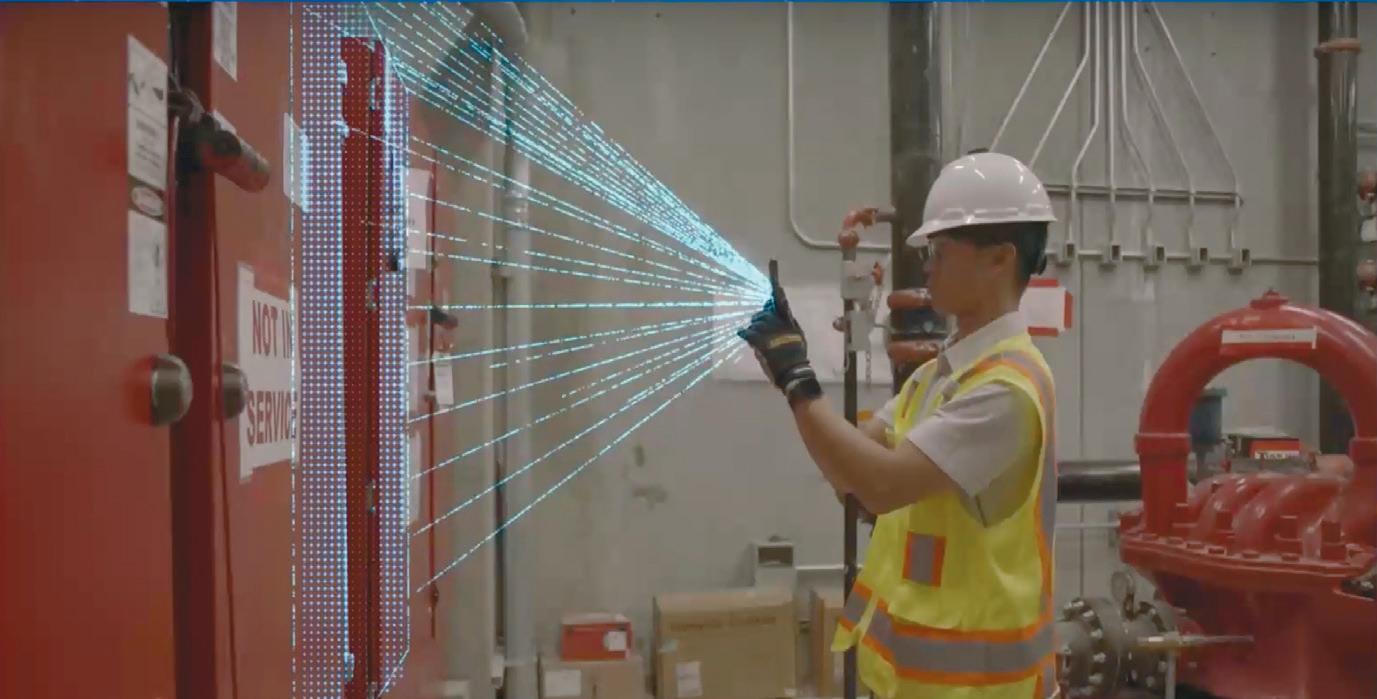 New VR and AR headsets, bridging the gap between GIS and BIM, LiDAR scanning on the iPhone, and lots more 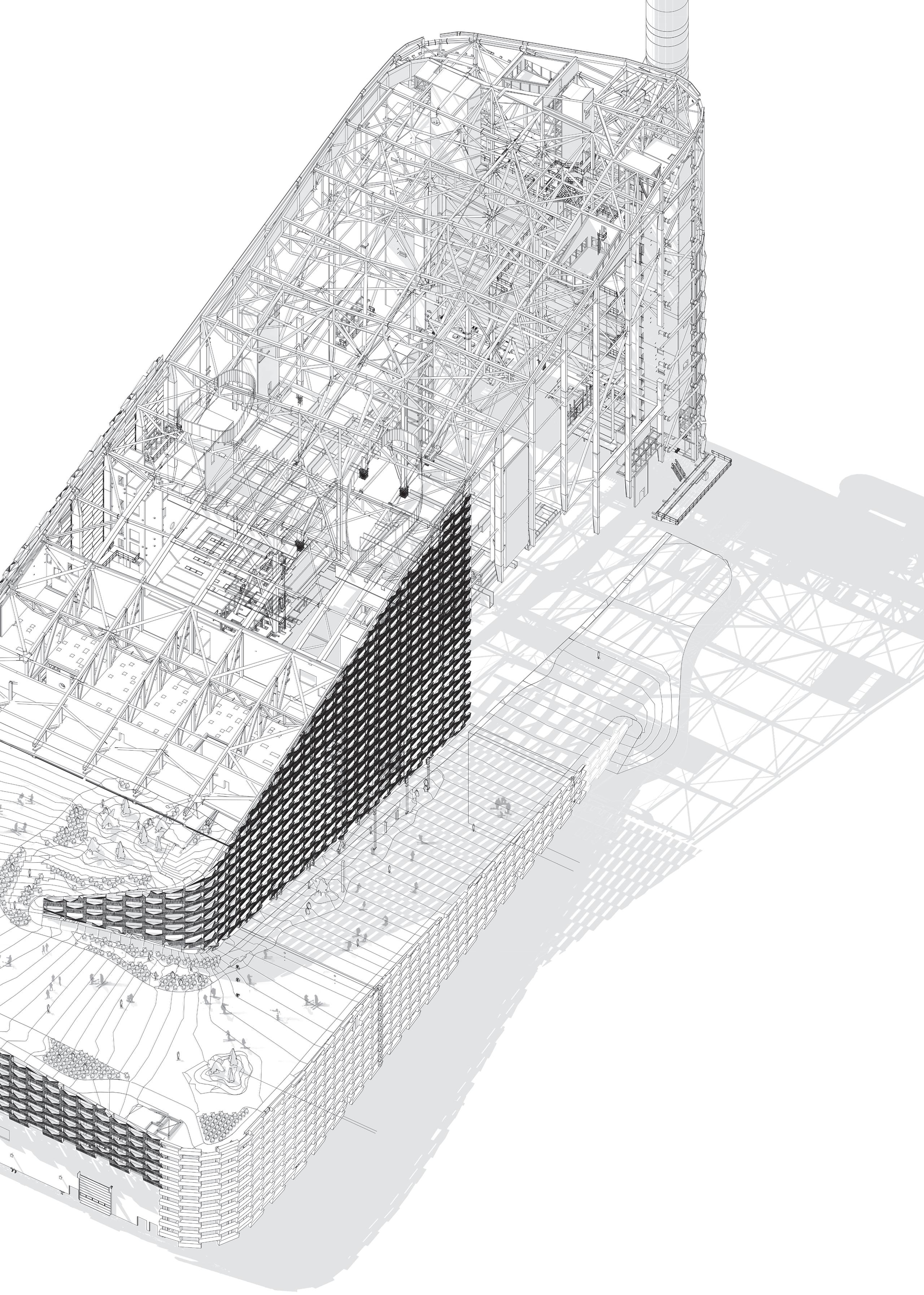 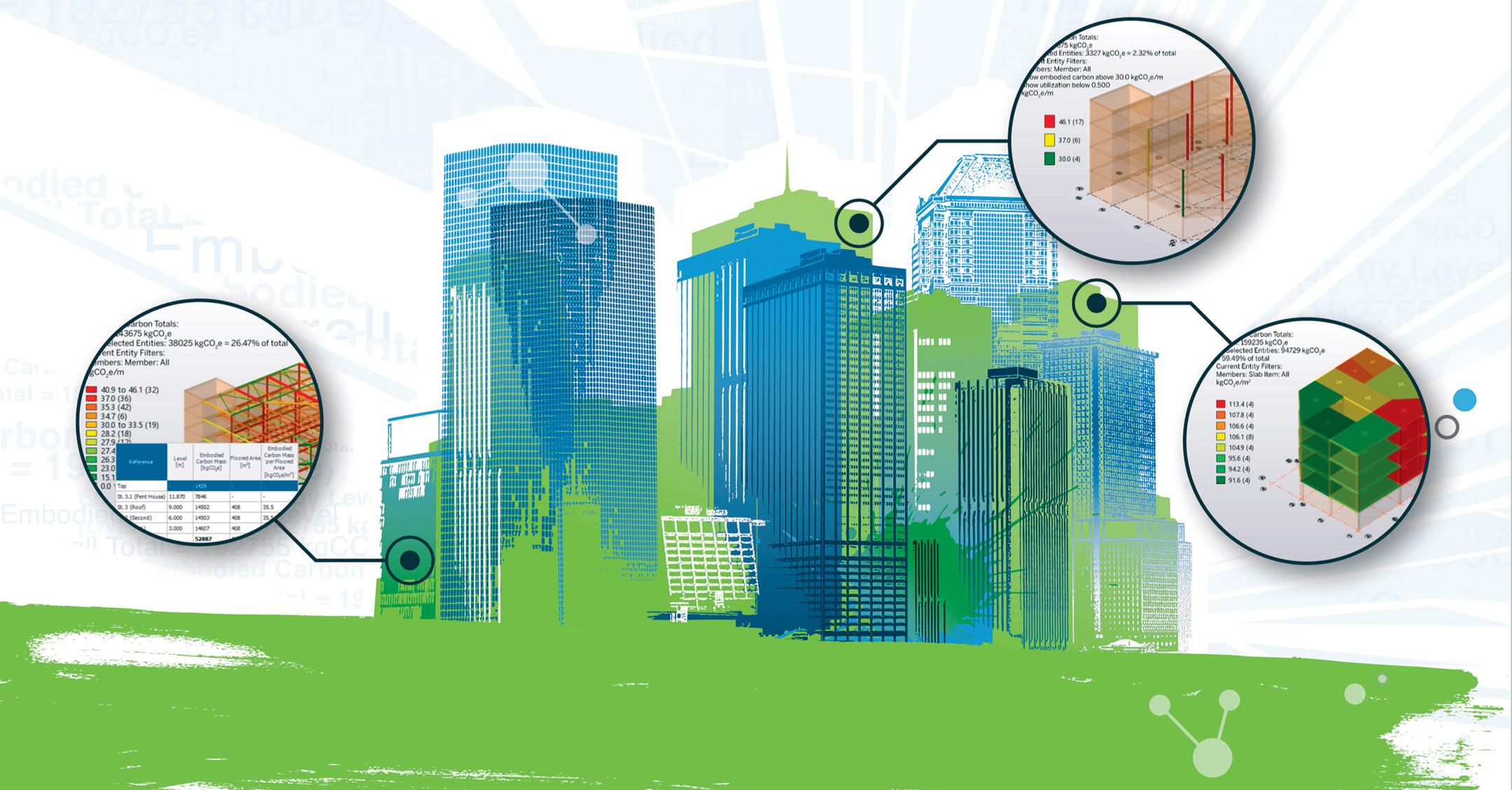 When it comes to identifying and calculating the embodied carbon in structures, technology can take the strain 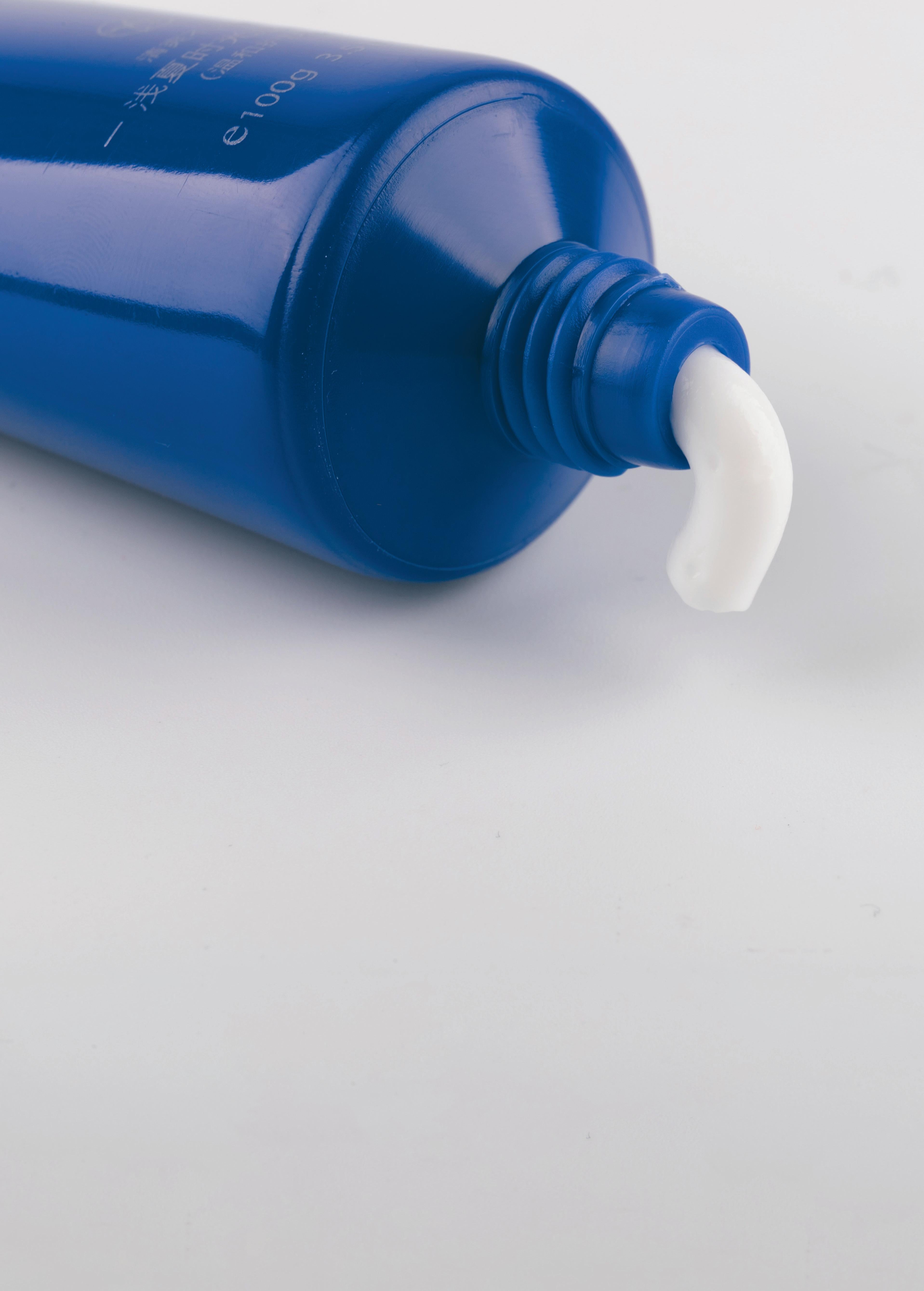 Power to the planners 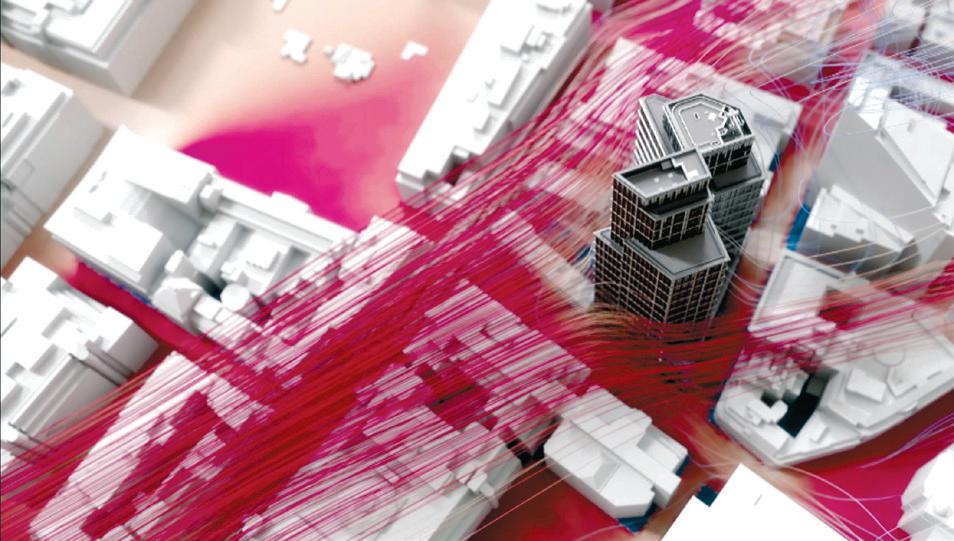 Our London event, which gave a platform for the true pioneers in our industry, is now available to view on-demand 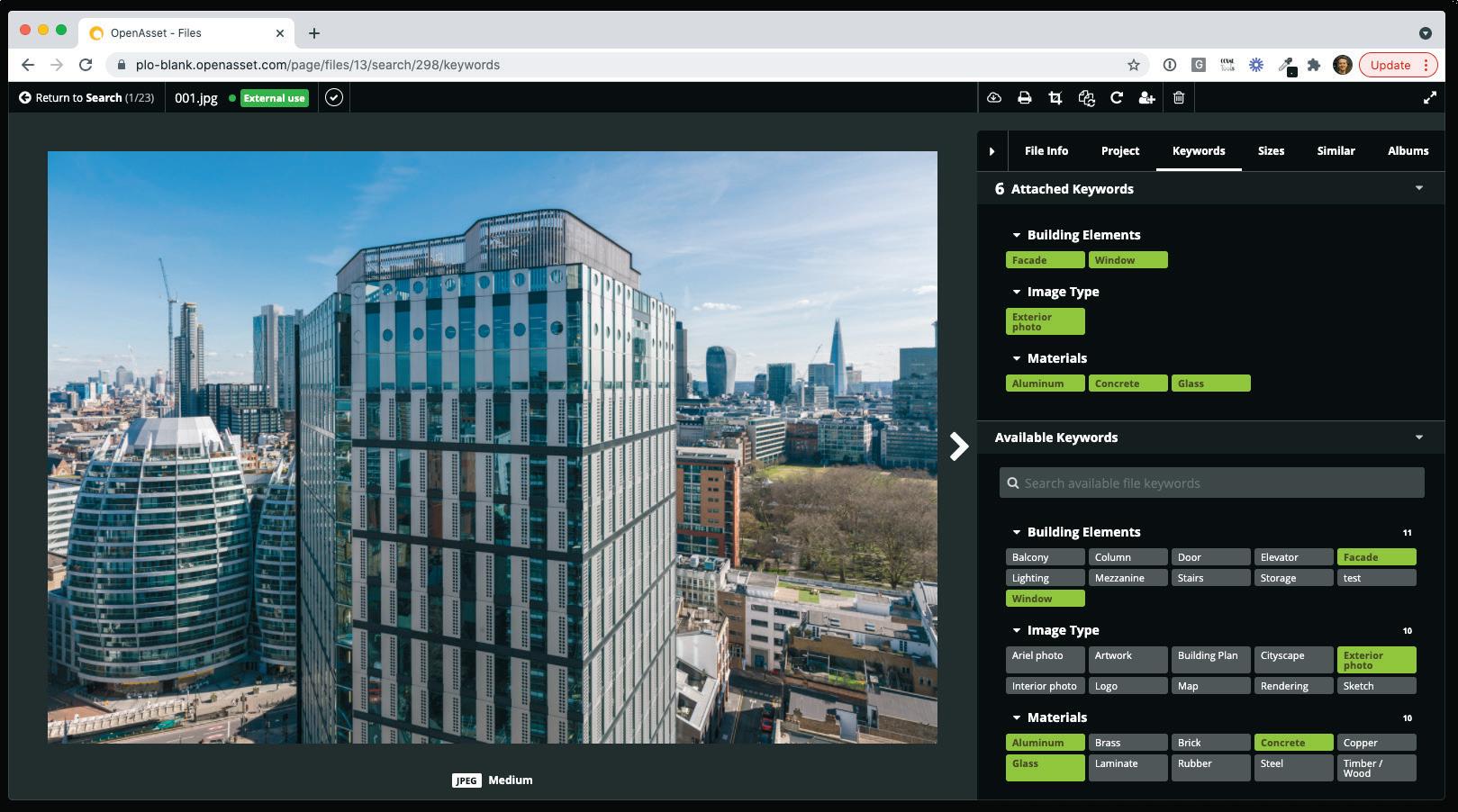 This cloud-based DAM is designed specifically to help AEC firms get more out of their vast collection of assets, for marketing, communications and beyond 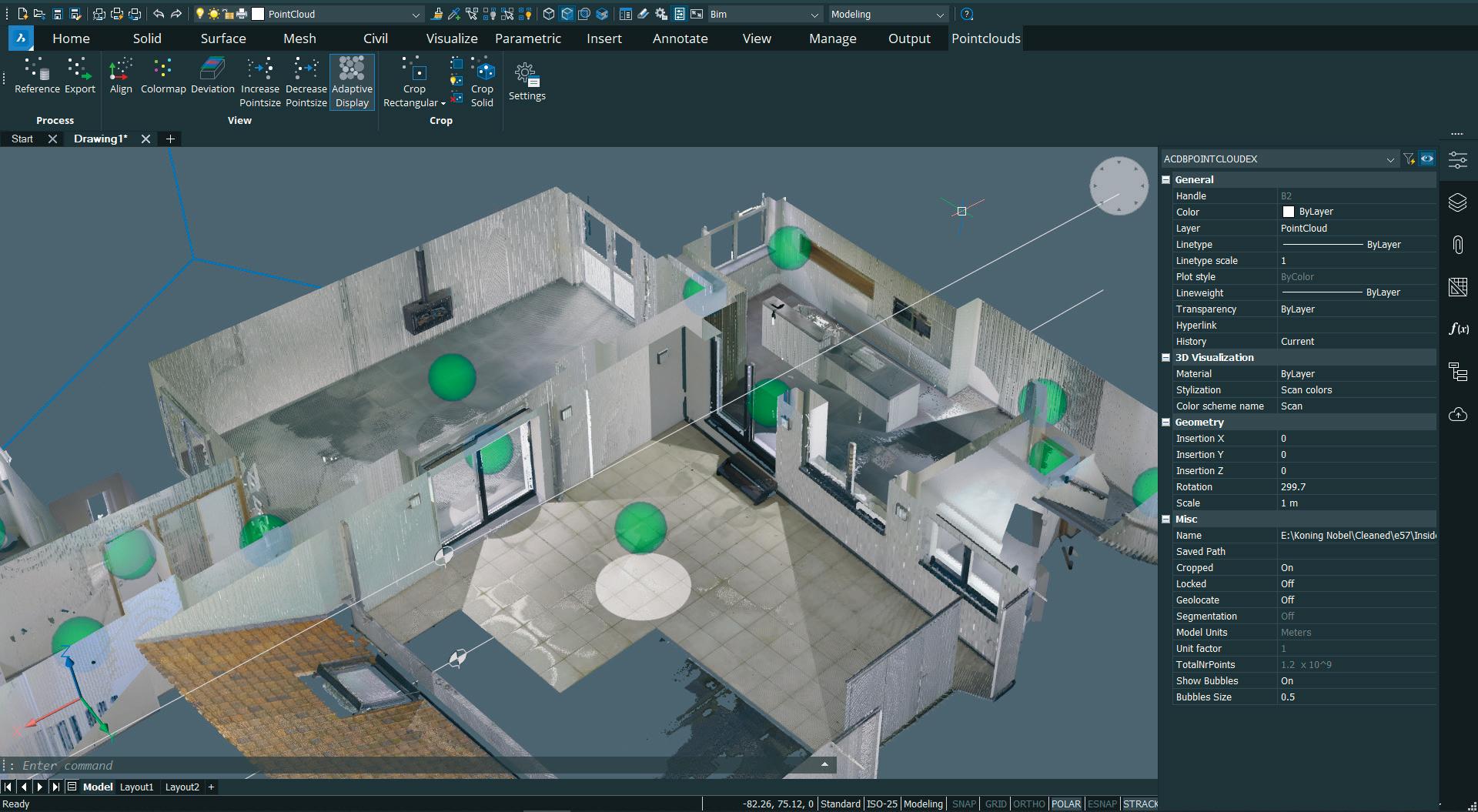 Bricsys, the creator of BricsCAD BIM, has showcased new capabilities and updates across multiple market segments based on the new v22 release of BricsCAD

When it comes to how teams are managed and work is delivered, it might be time for building design professionals to follow the lead of software developers