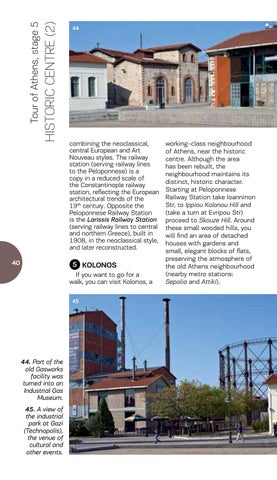 combining the neoclassical, central European and Art Nouveau styles. The railway station (serving railway lines to the Peloponnese) is a copy in a reduced scale of the Constantinople railway station, reflecting the European architectural trends of the 19th century. Opposite the Peloponnese Railway Station is the Larissis Railway Station (serving railway lines to central and northern Greece), built in 1908, in the neoclassical style, and later reconstructed.

5 KOLONOS If you want to go for a walk, you can visit Kolonos, a 45

44. Part of the old Gasworks facility was turned into an Industrial Gas Museum. 45. A view of the industrial park at Gazi (Technopolis), the venue of cultural and other events.

working-class neighbourhood of Athens, near the historic centre. Although the area has been rebuilt, the neighbourhood maintains its distinct, historic character. Starting at Peloponnese Railway Station take Ioanninon Str, to Ippiou Kolonou Hill and (take a turn at Evripou Str) proceed to Skouze Hill. Around these small wooded hills, you will find an area of detached houses with gardens and small, elegant blocks of flats, preserving the atmosphere of the old Athens neighbourhood (nearby metro stations: Sepolia and Attiki). 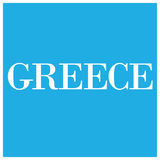