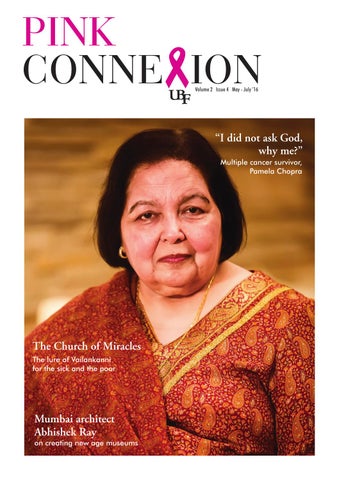 “I did not ask God, why me?” Multiple cancer survivor, Pamela Chopra

I was shaken when I recently read Dr Paul Kalanithi’s book, When Breath Becomes Air. The book has become cult reading the world over for the poignancy of the tale: a brilliant neurosurgeon writing about what is remaining of his life even as his medical reports declare he has terminal cancer. It is lovely prose, incandescent and rhythmic as best writing should be but beneath it all, is the story of the cancer, how it strikes a 37-year-old doctor on the threshold of a grand career. Once Dr Kalanithi realises that the cancer, which is spreading to the liver and lungs is terminal, his mundane dilemmas disappear. No longer does he have to agonise about whether he should take up the coveted position at Stanford University, for which he was the prime candidate and work on his dream of doing cutting edge research on the brain. Rather it is about how best to hold on to every moment of a life that is evaporating. He even has to contemplate whether he should have a child since he will not be there to nurture her (they in fact do have a daughter to whom the book is dedicated). Dr Kalanithi had everything going for him, in fact. A BA and MA from Stanford and a Master’s in Philosophy from Cambridge before graduating from Yale University in Medicine! With a cardiologist father, Dr Kalanithi writes, he wanted to stay away from medicine and pursue literature until he realised it is with medicine that he will gain a better understanding of people, not unlike the Russian writer, Anton Chekov. In an email to his friend, after he realises he has terminal cancer, he writes, “The good news is that I’ve already outlived two Brontës, Keats and Stephen Crane. The bad news is that I haven’t written anything.” But, he does write the story of his life, and how! It can compare with the best literature, and you can almost see the lights being switched off in his house when his ‘breath becomes air’. The book has been published posthumously by his wife, Lucy Kalanithi, also a doctor. I like to quote Dr Kalanithi on the courageous spirit of cancer victims. He says that when one is ill, you are no longer the person you were, and something of what is your core gets ruptured. Which is why, I am amazed with every survivor’s story I read in our own magazine. Few speak of the horrors of fighting cancer: the chemos, the radiation and the surgeries. Most of them are like our woman on the cover, Pamela Chopra, the wife of Bollywood’s King of Romance, Yash Chopra. She seems to literally do the dance with cancer to a Yash Chopra song! Death will get all of us one day. But, how many of us will chronicle a death by celebrating the last few months we are alive?

SURVIVING CANCER Bollywood’s feisty first lady, Pamela Chopra narrates how she fought multiple cancers with a sense of fortitude and did not let it stop her from singing, if not, humming

MAKING A DIFFERENCE Architect and design entrepreneur, Abhishek Ray on his journey developing new age, interactive and accessible museums all around India

UBF DIARY A quarterly round up of events, happenings and news at the Ushalakshmi Breast Cancer Foundation HERITAGE Turning the spotlight on Vailankanni Church in Tamil Nadu that is among the most visited pilgrimage town in India attracting 20 million visitors every year MY VIEW In his quarterly column, Dr Raghuram tells women not to worry about cysts in their breasts because they are largely benign

She is the wife of one of Bollywood’s most successful and loved film directors – the late Yash Chopra. But, that is not all there is to her. Pamela Chopra is a feisty lady, charming, warm and vivacious. As she reveals her trysts with cancer of not just the breast but neck, chest and brain cancer, she comes across as a tough lady with nerves of steel. The best part about her is that she did not let the cancers squash her joie de vivre. In a rare interview, the 68-year-old Pamela, who always sang one song in her husband’s movies because she was his good luck charm, opens up to Minal Khona at the iconic Yash Raj studios in Mumbai.

The ever-smiling Pamela with her late husband, Yash Chopra

Pamela dealt with the cancer like she always does when she has a problem in her life – face it. “When the doctor first told me I had cancer, I had tears in my eyes. But, I am not a person who will cry and feel sad. I did not feel sorry for myself or fight with God asking, why me? I decided it was a problem I would deal with and move on from there,” she says matter-of-factly

â&amp;#x20AC;&amp;#x153;I always ate healthy food. I have reduced my animal protein intake now. In fact, my son Aditya and his wife Rani are followers of this naturopath in Austria called Dr Hans Stoisser. His spa is called Viva Mayr and from a blood sample, they can tell you what you should eat and what not to eat. So, I have included that advice in my diet as wellâ&amp;#x20AC;?

Reinventing Museums The concept of a museum in India conjures up images of musty corners with sleepy attendants and sculptures, objets dâ&amp;#x20AC;&amp;#x2122;art and artefacts displayed in unimaginative rows. But, that is in the past. Abhishek Ray, an enterprising architect from Mumbai, who calls himself a design entrepreneur, has developed exciting museums in different parts of India making them interactive, fun and also accessible for people with disabilities. Minal Khona finds out more

Abhishek Ray with his unique ‘Museum on Wheels’

The museum bus designed by Ray’s company Matrika Design Collaborative, is a self-sustaining unit carrying replicas of exhibits at the Prince of Wales Museum, Mumbai. The bus also boasts of a host of technologies to help the curators play video presentations 8

Abhishek Ray has taken museum design to another level in India

Live on UK Radio! The listeners of UK Radio in Chester got a glimpse into Dr Raghuram’s inspiring life journey for the past eight years, such as his toughest decision to relocate to India despite lucrative career opportunities in the UK and the uphill task of establishing a new concept of breast health in India. The UK live radio show hosted by Flipside Radio Station in Chester, was conducted by Dr Nikhil Kaushik, a renowned ophthalmologist from north Wales. The programme was interspersed with Dr Raghuram’s pick of Bollywood music numbers!

Empowering Speech in Gujarat Dr Raghuram, President, The Association of Breast Surgeons of India (ABSI) delivered the presidential address at their west zone regional meeting at Ahmedabad. A large number of surgeons from Gujarat, Maharashtra and Rajasthan attended the meet and heard his talk.

Bangladesh Calling Dr Raghuram spoke eloquently on his initiatives to improve breast healthcare in India at the First International Congress organised by the Association of Breast Surgeons of Bangladesh in Dhaka. He impressed upon Dr Shirin Sharmin Chaudhury, the Honourable Speaker, Bangladesh Parliament and Zahed Makek, Bangladesh’s Health Minister of the urgent need to implement a population based breast cancer screening programme in Bangladesh, like the model deployed in Telangana and Andhra Pradesh.

Empowering Bank Employees The women employees of the State Bank of India (SBI) were another target group for a lecture on the importance of the early detection of breast cancer. Hardayal Prasad, SBI, chief general manager for Telangana and AP and his wife Shraddha Prasad paid rich tributes and felicitated Dr Raghuram for his exemplary work.

UBF’s Path-Breaking Initiative With Telugu States In a laudable initiative to save scores of lives, the Andhra Pradesh government has welcomed Ushalakshmi Breast Cancer Foundation’s proposal to implement a population based breast cancer screening programme to train health care workers and doctors at performing the Clinical Breast Examination (CBE) – a screening method to detect breast cancer early. In March, Dr Raghuram had already trained core healthcare staff in 13 districts of Andhra Pradesh at Rajahmundry and Tirupati. Some 6,000 health care workers and 1,000 doctors across the state will be trained by June/July 2016. These trained medical personnel will then screen all underprivileged women between the ages of 35 – 65 years across the state. A similar programme is on the anvil with Telangana. This initiative in the Telugu states is all set to become the largest population based screening programme and a benchmark for the nation. To be given this huge responsibility by the government, is indeed a big honour for the Foundation. 11

The Healing Mother of Vailankanni It is one of the most visited Christian shrines in south Asia. The soaring white spires of the Vailankanni shrine are like beacons of hope for devotees on a pilgrimage to the Basilica of the Lady of Good Health. The faith in the Mother shines in the eyes of the devotees, as some inch their way towards the shrine on their knees, some in wheelchairs and some bring their loved ones with them, hoping to be healed by the benign Holy Virgin Mary. The main church of the Basilica of the Lady of Health in Vailankanni is being currently restored by a Mysore architect to preserve its pristine, ancient structure and beauty. Anil Mulchandani and Dinesh Shukla visit this famous pilgrimage site in Tamil Nadu which attracts 20 million pilgrims each year

The Gothic style of the church inspires awe among the pilgrims

Pilgrims taking a stroll by the sea

The power of this holy shrine is legendary probably because it has been sanctified by apparitions of Mary, much like the shrines of Our Lady of Lourdes in France and Our Lady of Fatima in Portugal, key places of pilgrimages for Catholics, after the Holy Land and Rome

Breast Cysts A Benign Issue A 40-year-old woman noticed a lump in her left breast, which was diagnosed as a non-cancerous cyst. In his column this quarter, Dr P Raghuram tells women not to be anxious about breast cysts