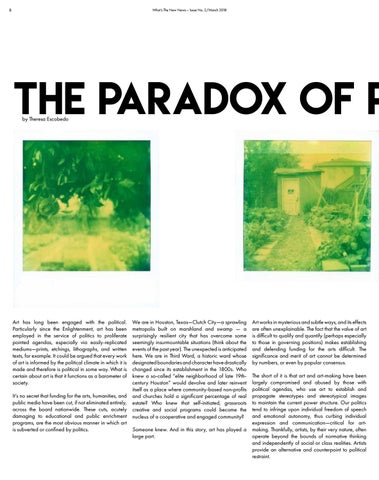 The Paradox of P by Theresa Escobedo

Art has long been engaged with the political. Particularly since the Enlightenment, art has been employed in the service of politics to proliferate pointed agendas, especially via easily-replicated mediums—prints, etchings, lithographs, and written texts, for example. It could be argued that every work of art is informed by the political climate in which it is made and therefore is political in some way. What is certain about art is that it functions as a barometer of society. It’s no secret that funding for the arts, humanities, and public media have been cut, if not eliminated entirely, across the board nationwide. These cuts, acutely damaging to educational and public enrichment programs, are the most obvious manner in which art is subverted or confined by politics.

We are in Houston, Texas—Clutch City—a sprawling metropolis built on marshland and swamp — a surprisingly resilient city that has overcome some seemingly insurmountable situations (think about the events of the past year). The unexpected is anticipated here. We are in Third Ward, a historic ward whose designated boundaries and character have drastically changed since its establishment in the 1800s. Who knew a so-called “elite neighborhood of late 19thcentury Houston” would devolve and later reinvent itself as a place where community-based non-profits and churches hold a significant percentage of real estate? Who knew that self-initiated, grassroots creative and social programs could become the nucleus of a cooperative and engaged community?

Art works in mysterious and subtle ways, and its effects are often unexplainable. The fact that the value of art is difficult to qualify and quantify (perhaps especially to those in governing positions) makes establishing and defending funding for the arts difficult. The significance and merit of art cannot be determined by numbers, or even by popular consensus.

The short of it is that art and art-making have been largely compromised and abused by those with political agendas, who use art to establish and propagate stereotypes and stereotypical images to maintain the current power structure. Our politics tend to infringe upon individual freedom of speech and emotional autonomy, thus curbing individual expression and communication—critical for artSomeone knew. And in this story, art has played a making. Thankfully, artists, by their very nature, often large part. operate beyond the bounds of normative thinking and independently of social or class realities. Artists provide an alternative and counterpoint to political restraint. 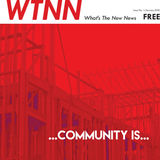