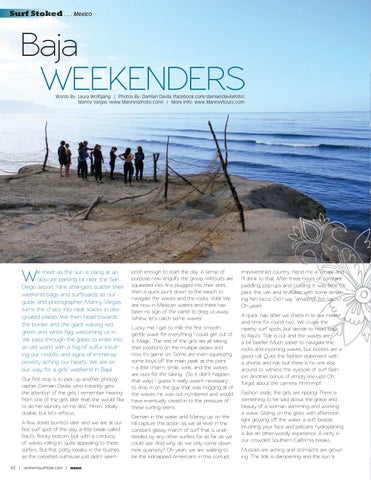 e meet as the sun is rising at an obscure parking lot near the San Diego airport. Nine strangers scatter their weekend bags and surfboards as our guide and photographer, Manny Vargas turns the chaos into neat stacks in designated places. We then head towards the border and the giant waving red, green and white flag welcoming us in. We pass through the gates to enter into an old world with a fog of sulfur insulting our nostrils, and signs of immense poverty aching our hearts. We are on our way for a girls’ weekend in Baja!

Our first stop is to pick up another photographer, Damian Davila, who instantly gets the attention of the girls. I remember hearing from one of the girls later that she would “like to do her laundry on his abs”. Hmm, totally doable, but let’s refocus. A few street burrito’s later and we are at our first surf spot of the day, a little break called Raul’s. Rocky bottom, but with a corduroy of waves rolling in: quite appealing to these surfers. But first, potty breaks in the bushes, as the carpeted outhouse just didn’t seem 62 | womenssurfstyle.com | wSSm

posh enough to start the day. A sense of purpose now engulfs the group. Wetsuits are squeezed into, fins plugged into their slots, then a quick jaunt down to the beach to navigate the waves and the rocks. Voila! We are now in Mexican waters and there has been no sign of the cartel to drag us away. Whew, let’s catch some waves! Lucky me, I get to milk the first smooth gentle wave for everything I could get out of it. Magic. The rest of the girls are all taking their positions on the multiple peaks and now it’s game on. Some are even squeezing some boys off the main peak at the point – a little charm, smile, wink, and the waves are ours for the taking. (So it didn’t happen that way). I guess it really wasn’t necessary to drop in on the guy that was hogging all of the waves; he was out-numbered and would have eventually caved in to the pressure of these surfing sirens. Damian in the water and Manny up on the hill capture the action as we all revel in the constant glassy march of surf that is unattended by any other surfers for as far as we could see. And why do we only come down here quarterly? Oh yeah, we are waiting to be the kidnapped Americans in this corrupt,

impoverished country. Hand me a Tecate and I’ll drink to that. After three hours of constant paddling, pop-ups and cruising, it was time to pack the van and revitalize with some amazing fish tacos. Did I say “amazing” fish tacos? Oh yeah! A quick nap after we check in to our hotel and time for round two. We cruise the nearby surf spots, but decide to head back to Raul’s. Tide is out and the waves are a bit beefier. Much easier to navigate the rocks and incoming waves, but booties are a good call. Quite the fashion statement with a shortie and hat, but there is no one else around to witness this eyesore of surf fashion. Another bonus of empty line-ups! Oh, forgot about the camera. Hmmmpf. Fashion aside, the girls are ripping! There is something to be said about the grace and beauty of a woman skimming and working a wave. Gliding on the glass with afternoon light glowing off the water, a soft breeze brushing your face and pelicans hydroplaning is like an other-wordly experience. A rarity in our crowded Southern California breaks. Muscles are aching and stomachs are growling. The tide is dampening and the sun is

WSSM Womens Surf Style Magazine brings you another surf-packed issue featuring women from all over the globe, united by their passion for surfing. Health, beauty, fitness and of course, incredible beach and city fashion for the fashion conscious surfer is also found in this issue, along with surf travel stories, sun safety articles, and swimwear for surfer girls! 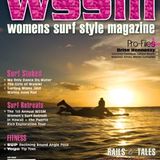