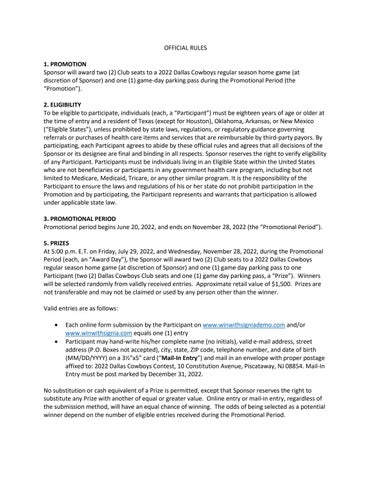 No substitution or cash equivalent of a Prize is permitted, except that Sponsor reserves the right to substitute any Prize with another of equal or greater value. Online entry or mail-in entry, regardless of the submission method, will have an equal chance of winning. The odds of being selected as a potential winner depend on the number of eligible entries received during the Promotional Period.

6. PRIZE REDEMPTION Sponsor will have the right to verify each Prize recipient’s eligibility. Prize recipients will be notified via email and each Prize will be delivered to the Prize recipient’s [address on file from online form completion]. If the recipient cannot be contacted via email after reasonable effort, or if recipient fails to respond to a Prize notification within three (3) days of first attempted notification, Sponsor will retain the applicable Prize on recipient’s behalf until the earlier of being contacted by recipient or ten (10) days from Sponsor’s first attempt to notify recipient. If recipient has not contacted Sponsor within ten (10) days of Sponsor’s first attempt to notify recipient, recipient’s Prize will be forfeited. Prize recipients may not resell a Prize. For a list of Winners, available after November 28, 2022, send a self-addressed stamped envelope to: 2022 Dallas Cowboys Contest, 10 Constitution Avenue, Piscataway, NJ 08854. Requests must be received by December 31, 2022. 7. GENERAL Sponsor makes no warranties, representations or guarantees relative to any Prize, and disclaims all liability for the provision, use, quality, or nature of any third-party product or service provided to the Prize recipient. Prize recipient is responsible for all taxes resulting from acceptance and use of the Prize, and all costs and expenses not specified as part of the Prize. Sponsor reserves the right to terminate, withdraw, or amend the Promotion or any portion of this Promotion for any reason without notice, including, without limitation, terminating the Promotion or any portion of this Promotion if the Sponsor suspects that tampering has occurred. Sponsor reserves the right to terminate or amend any portion of this Promotion, without notice, if required by applicable law. By entering this Promotion, each Participant represents and warrants that he or she is eligible to participate in the promotion, has obtained any required permission from his or her employer or applicable third party to participate in this Promotion and accept a Prize, and participation in this Promotion or acceptance of a Prize does not violate any agreements or obligations that he or she may have with his or her employer or any third party or any applicable laws or association rules, policies or regulations applicable to the Participant. By participating, each Participant agrees to release and hold harmless Sponsor, the NFL Entities, Pro Silver Star, Ltd., Cowboys Stadium, L.P., the Dallas Cowboys, and each of their respective parent, subsidiary, and affiliate companies and their respective employees, officers, and directors, representatives, agents, suppliers, advertising and promotion agencies, Prize suppliers, or any subcontractors of the above (the “Released Parties”) from and against any and all claims, losses, damages or liability of any kind, resulting from or arising out of participation in the Promotion or the acceptance or use of any Prize, including, without limitation, damages or liability related to COVID-19. By participating in this Promotion, Participant agrees and acknowledges to be bound by these rules, all Sponsor-related terms and conditions, as well as the decisions of Sponsor, which are final and binding in all respects, to waive any rights to claim ambiguity with these rules. Sponsor is not responsible if the Promotion or the Prize is cancelled due to a force majeure event. The Released Parties are not responsible for: (1) any incorrect or inaccurate information, whether caused by any Participant, technical errors or by any of the equipment or programming associated with or utilized in the Promotion; (2) technical failures of any kind, including, but not limited to malfunctions, interruptions, or disconnections in phone lines or network hardware or software; (3) unauthorized human intervention in any part of the entry process or the Promotion; (4) technical or human error which may occur in the administration of the Promotion or the processing of entries; or (5) any injury or damage to persons or property which may be caused, directly or indirectly, in whole or in part, from

Participant’s participation in the Promotion or receipt or use or misuse of any Prize. If for any reason a Participant’s entry is confirmed to have been erroneously deleted, lost, or otherwise destroyed or corrupted, Participant’s sole remedy is another entry, if possible. No more than the stated number of Prizes will be awarded. In the event that production, technical, seeding, programming or any other reasons cause more than stated number of Prizes as set forth in these rules to be available and/or claimed, Sponsor reserves the right to award only the stated number of Prizes by a random drawing among all legitimate, unawarded, eligible Prize claims. By participating, Participants agree that (a) all claims and judgments will be limited to your actual out-ofpocket costs incurred, including, without limitation, costs associated with entering this Promotion, but in no event including attorney’s fees; and (b) to the extent permitted by applicable law, under no circumstances will Participant be permitted to recover damages, and entrant hereby waives all rights to claim punitive, incidental, or consequential damages or any other damages multiplied or otherwise increased. By participating in this Promotion, Participant grants to Sponsor and those acting with Sponsor’s permission, the right to print, publish, and use Participant’s name, likeness, photo, testimonial, and biographical information for promotional purposes in connection with the Promotion (including posting on Sponsor’s websites and social media sites) without additional consideration, except where prohibited by law. Upon the request of Sponsor, Participant will be required to return a separate statement of eligibility, publicity release, Prize acceptance form, and/or IRS W-9 form. All statements/forms must be fully completed and returned within three (3) days following receipt of the statements/forms by the Participant, or the Participant may be disqualified. 8. SPONSOR The Promotion is sponsored by Sivantos, Inc., 10 Constitution Avenue, Piscataway, NJ 08854 (“Sponsor”). 9. DISPUTE RESOLUTION Participants agree that: (a) any and all disputes, claims, and causes of action arising out of, or connected with, this Promotion or the acceptance, use or misuse of the Prizes shall be resolved individually, without resort to any form of class action, and exclusively by the United States District Court in New Jersey or the appropriate New Jersey state court pursuant to the laws of state of New Jersey; (b) any and all claims, judgments and awards shall be limited to actual out-of-pocket costs, but in no event including attorneys’ fees, disbursements or court costs; and (c) under no circumstances will Participant be permitted to obtain awards for, and Participant hereby waives all rights to claim, punitive, incidental, and consequential damages, and any other damages other than for actual out-of-pocket costs; and (d) any right to a jury trial in any dispute, claim, or cause of action arising out of, or connected with, this Promotion is hereby waived. 10. NFL ENTITIES The National Football League, its member professional football clubs, NFL Ventures, Inc., NFL Ventures, L.P., NFL Properties LLC, NFL Enterprises LLC and each of their respective subsidiaries, affiliates, shareholders, officers, directors, agents, representatives, and employees (collectively, the “NFL Entities”) will have no liability or responsibility for any claim arising in connection with participation in this Promotion or any prize awarded. The NFL Entities have not offered or sponsored this Promotion in any way.

11. PRIVACY INFORMATION You understand that any personally identifiable information you provide to Sponsor shall be used only in a manner consistent with these rules, and with Sponsor’s Online Privacy Policy, which can be found at www.wsa.com/en-us/services/wsa-privacy-notice/.