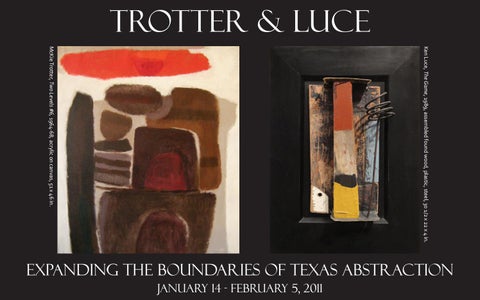 Expanding the Boundaries of Texas Abstraction Continuing with our mission to pled with variations in style, comdocument and share the evolution position and materials employed of twentieth-century Texas art, and by Luce and Trotter, underscore especially its post-war progressions, creative expansions in the boundWilliam Reaves Fine Art pays tribaries of abstract art, which gained ute to two Lone Star artists, each momentum in Texas during the prominent during the second half of 1950s and continues through the the twentieth century. This exhibipresent. By juxtaposing Trotter’s tion combines stellar examples of paintings with Luce’s found-objects McKie Trotter’s (1918-1999) abstract sculpture in a joint exhibition, we expressionist paintings from the invite viewers to reflect upon the 1950s and 1960s, with a compelling aesthetic approaches of two genera22. Trotter, Winterscape #4 selection of Ken Luce’s (1950-prestions of post-war Texas modernists. ent) found-object constructions from the 1980s This pairing also affords a stimulating opportunity and 1990s. for patrons to consider the evolution of threedimensional abstract sculpture, especially the use The differences in period of these works, couof found-object materials, which became increas-

ingly popular among Texas artists and collectors during the late twentieth century.

emerged as a professional artist in the 1970s, immediately garnering favorable reviews and showing in important Texas and New York galleries. His preferred form of abstraction reflects a more representational quality than Trotterâ&amp;#x20AC;&amp;#x2122;s, and his work shows his affinity for charismatic, three-dimensional stilllife and/or figurative subject matter. Luce skillfully uses wood, as well as a myriad of carefully selected objects to construct his sculptural renditions. The results are captivating in their creative composition and striking color.

As for the artists, Trotter was among the stateâ&amp;#x20AC;&amp;#x2122;s pioneering modernists of the 1950s and a scion of post Fort Worth Circle abstraction. His expressionist paintings are deeply inspired by the Texas landscape, strong-lined, and imbued with rich color. In addition to his painting, Trotter was on the faculty at Texas Christian University, and already well-ensconced as artist and university instructor for some Both Trotter and Luce worked in Texas twenty-five years when the youngindependently of each other during the later Ken Luce graduated from the art 38. Luce, Diablo ter half of the twentieth century, creating program at the University of Housoriginal forms of abstract art in different citton. Luce, a generation younger than Trotter, ies, in different styles, and with prime production

periods occurring decades apart. Neither artist knew nor influenced the other; yet both men worked at the creative edge of their times and have presented compelling forms of abstractions in their respective periods. While these artists were not the first Texans to experiment with abstract painting or foundobject sculpture within our state, they were both among the earliest and leading proponents of their respective modes of abstraction during their times. Both show quality and originality in their creative production and have made meaningful contributions to expanding the boundaries of Texas abstraction. The works of these artists stand alone. To see them together, however, reminds us of the wide range and richness of abstract art that emerged

in Texas art over the course of the late twentieth century. Through this exhibition William Reaves Fine Art presents yet another piece of the astounding mosaic of post-war Texas art history. We encourage you to view these early expressions of Texas abstraction by McKie Trotter and Ken Luce with renewed pleasure and appreciation. Welcome and enjoy! Bill Reaves, Sarah Beth Wilson and Leslie Thompson

• 1960, Southwestern Art: A Sampling of Contemporary Painting and Sculpture, Dallas Museum of Art • 1961-67, Annual Exhibition of Artists of Fort Worth, Fort Worth Art Center

A Visit with Ken Luce: Perspectives of a Houston Artist Conducted by Sarah Beth Wilson and Leslie Thompson on December 7, 2010 SBW &amp; LT: Let’s start from the beginning and talk about your art education. Who did you study with at the University of Houston? KL: I started at the University of Houston in 1968. I had a great drawing teacher with Bill Anzalone and at about the same time met Richard Stout, who became a life-long family friend. There was Walter Lodge, a great graphics teacher (although I had to promise him never to take his course) and very funny guy. I studied lithography with Bo Horack (one of the original lithographers who helped start Tamarind in L.A. before the institute’s move to Albuquerque). My friend Julian Schnabel and I took Experimental Painting from David Hickman, who was new then and painting

with acrylics in a more hard edge style. In our senior year Julian and I shared studios above a hair salon over on Taft. Dr. Peter Gunther was the art historian at the University of Houston. I took his art history course as a freshman and failed, which is ironic because I teach art history now. I had a private maestra from the age of ten until I married. I first began taking lessons with Helen Coffey at her studio on Main Street in 1960. I met her in Palm Center where she was doing pastel portraits. I told her “if you can teach me to do that my mom will pay you”. So she taught me everything. Coffey had a gallery in Houston in the 1960s - the Coffey Gallery. She showed Charles Pebworth and other early Houston artists. I ended up studying with Coffey from 1960-1970.

SBW &amp; LT: What was your gallery experience like in Houston? KL: In 1985, I showed my large masks at DiverseWorks in Houston; this was my first big body of sculptural work and it was a real breakthrough exhibition. The high point was walking through the show with Mrs. de Menil. She owned a piece, too. Many years earlier I would get in trouble with my professors because I would show anywhere. When I was 20 or 21 I started showing at DuBose Gallery. That was a good gallery in Houston, and by 24 or so I was at David Findley Gallery in New York. SBW &amp; LT: How often do you work in your studio now? KL: Not often. It’s hard to find time. For years and

years I produced work shown at many galleries, some here in Houston, but also in Dallas, Chicago, and New York. I had to do a tremendous amount of work…it was very demanding and after 25 years I sort of ran out of gas. I wanted to make something “modern” but couldn’t quite figure out what that was! SBW &amp; LT: Do you mostly work in sculpture now or do you dabble in a little of everything? KL: I’m comfortable in any medium. I switch between painting, and sculpture, but mostly I’ve really just been fishing… SBW &amp; LT: When did your interest in sculpture begin? KL: I took some sculpture in college from Bernie Limmel at the University of Houston. Then be-

tween undergrad and grad school, while waiting I switched to sculpture in 1984 after my for someone to start a graduate art program in first trip to New York, where I saw the PrimitivHouston, I apprenticed with Bob Fowler. I welded ism in the Twentieth Century show at the Modern and learned the business of art from with Picasso, African masks, and whatBob. But both of my degrees are in not. My trip to New York was a real eye painting. opener for me, and a great experience In graduate school I met John seeing all of the art in that city. I came Alexander, James Surls, and other Dalback to Texas and was inspired. I can do las artists. The 1970s was the heyday that. I’m primitive. So I started making of Texas art – “Texas Tough” is what primitive masks, very authentic, but we called it. Artists like Richard Stout then decided I’m not a really primitive and Dick Wray blazed the trail for me artist. And this was my switch to sculpand my generation. Graduate school ture. I got a studio at the ship channel helped me discipline myself to connear Brady’s Island, started picking up stantly make art. By putting myself found materials - picked up furniture around like-minded artists who were boards, objects with interesting patina striving to make great art in the late - and created sculpture. Picasso really 20th century, I thought I would make dominated twentieth-century art, so better art and become a better 31.Luce, Construction (Homage to Juan Torres it’s hard not to pay attention Garcia) artist. And I did. to his work, he was a very vital

and vibrant character. I was inspired by him. Kurt Schwitters was also an influence as was Torres Garcia, but my piece referencing the artist was titled after the work was finished (see Luce’s Construction, Homage to Juan Torres Garcia, 1987).

you use in making your sculpture? How do you start?

SBW &amp; LT: Have you ever done any bronze casting or thought about doing some in the future? KL: I would like to work in bronze, and the wood pieces could easily be cast. Maybe I will do this one day. I would have to make an edition for the bronze pieces. But I have been thinking about it. I’ve talked with Joe Havel about using his foundry. SBW &amp; LT: So what kind of process do

KL: There are two ways you can approach your work. You can start with an idea and then realize that vision, or you can just start creating and hope the finished piece ends up what you want. I began with the masks, making faces. Then I made them large scale, ten to twelve feet. I would just start working with oak dunnage, tree shape pieces. But I found out if you flipped them over you could make this long V-shape base, and I would start here. Then I discovered I could make a big ear of corn from this (see Luce’s Deco Corn, 1988) – which thrilled me! The reason the pieces are so large, like the ones in my studio, is that they are

what I call exhibition pieces. If you are trying to going to make something beautiful, it never hurts be noticed in a visually chaotic world, I felt like a to start with the components being beautiful. And larger scale would give your work like I say, I’m from the old school. more presence. If you make a small It’s not about the angst. My work is cubist, primitive mask or sculpture, happy and it makes me feel better, I that’s one deal, but if you take that know that. The whole notion, to me and make it monumental it makes a anyway, of the painful, angst-filled much larger vibe. artist just isn’t me. I can’t imagine I was blessed in my friendwhy you would continue to create ship with John Mecom, Jr. He had art if you were in such pain. I’m haptons of French chateau interiors py when I make art, so I keep doing and architectural artifacts at the it. Perfectionism is a real drawback old Blimp Base in Hitchcock so I got to creativity – some people are the run of the place and got tons of never happy. French interior moldings and wood pieces. I love to combine these with SBW &amp; LT: Even with the found found objects and debris. There’s materials, your work still has an ap39. Luce, Cubist Mask nothing like slamming this beautiful pealing elegance to it. stuff with heavy debris. I really liked this combination (See Luce’s Cubist Mask, 1992). If you’re KL: I may make it too slick. It could be more

Continuing with our mission to document and share the evolution of twentieth-century Texas art, and especially its post-war progressions, William Reaves Fine Art pays tribute to two Lone Star artists, each prominent during the second half of the twentieth century. This exhibition combines stellar examples of McKie Trotter’s (1918-1999) abstract expressionist paintings from the 1950s and 1960s, with a compelling selection of Ken Luce’s (1950-present) found-object constructions from the 1980s and 1990s. 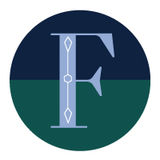